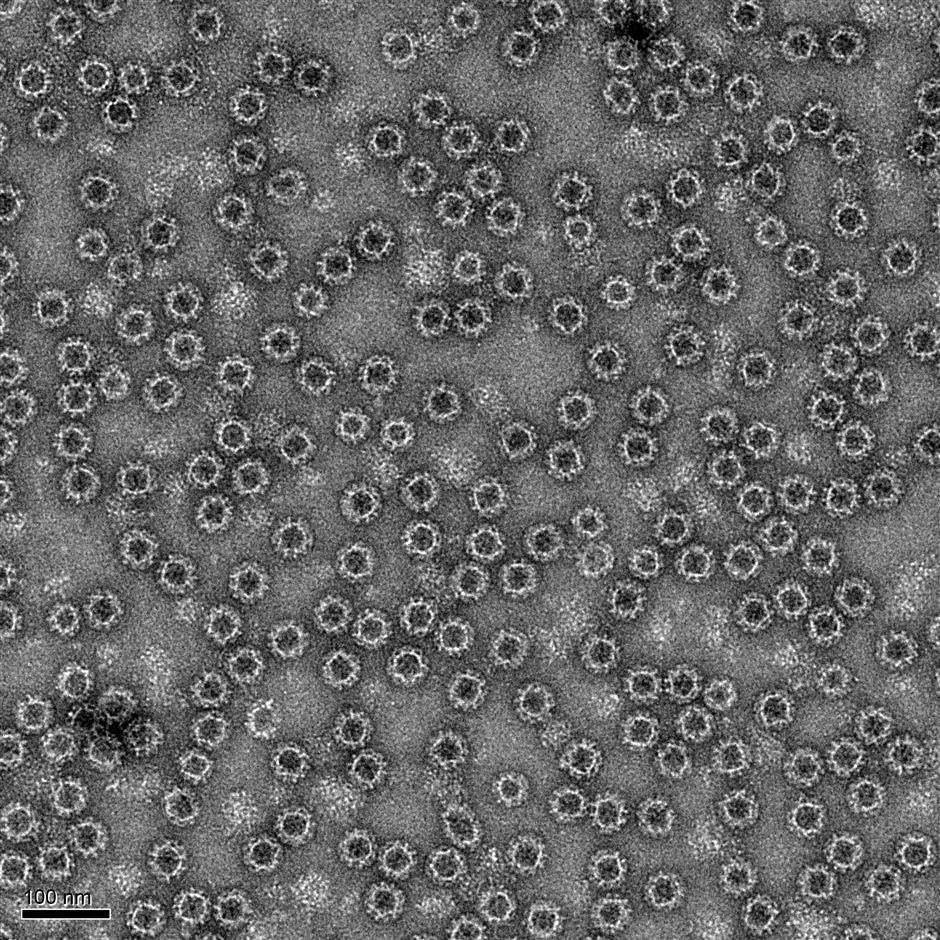 An image of the antigen of the norovirus vaccine seen under an electron microscope.

What could be the world’s most effective vaccine against the highly contagious norovirus has been given the green light for clinical trials in China, Shanghai scientists said on Tuesday.

When the home-developed vaccine hits the market in three to five years, it is expected to be the most effective of its kind, theoretically providing 80 to 90 percent protection from the virus, according to researchers from the Institute Pasteur of Shanghai under Chinese Academy of Sciences.

The norovirus is the most common cause of acute gastroenteritis. It is widely referred to as stomach flu. Outbreaks are common in cold seasons, like early spring and winter, and young children and elderly people are at particular risk.

It can be spread in water, food and air as well as through direct contact.

Worldwide, the norovirus causes an average 685 million cases of acute gastroenteritis and more than 210,000 deaths each year. China is seeing yearly increase in cases with every 156 in 1,000 children aged below 5 infected.

At present, there’s no vaccine or medicine to treat infections. People must just take care not to get infected. If they do, the best thing is to drink plenty of fluids and allow recovery to take its course.

In April 2015, researchers from the institute and Anhui Zhifei Longcom Biopharmaceutical Co joined forces to develop a vaccine. After four years of research, it was approved by the National Medical Products Administration for clinical trials on May 30 this year.

China is not the only country to research a norovirus vaccine. The United States and Japan have launched clinical trials but the “made in Shanghai” vaccine is expected to be the most effective, said Liu Qingwei, a researcher from the Shanghai institute.

“China is the latest among the three countries, but our vaccine provides wider protection,” he said.

More than 20 norovirus epidemic strains have been detected. In China, most infections are caused by four strains, and scientists developed their vaccine against these four.

Based on genetic engineering technologies, they managed to create a vaccine prototype that looks almost exactly the same as the norovirus to deceive and trigger a reaction from people’s immune cells.

Meanwhile, Shanghai-developed GV-971, the world’s first drug to improve the condition of people with Alzheimer’s, is set to hit the market this year.

According to the World Alzheimer’s Report 2018, there are around 47 million people with the irreversible, progressive brain disorder, and currently there is no cure.

GV-971 has been developed by Shanghai-based pharmaceutical company Green Valley, the Shanghai Institute of Materia Medica under Chinese Academy of Sciences and the Ocean University of China.

It has completed phase-3 clinical trials, the last test before reaching the market, and has demonstrated that it can significantly improve cognitive impairment in patients with mild-to-moderate Alzheimer’s.