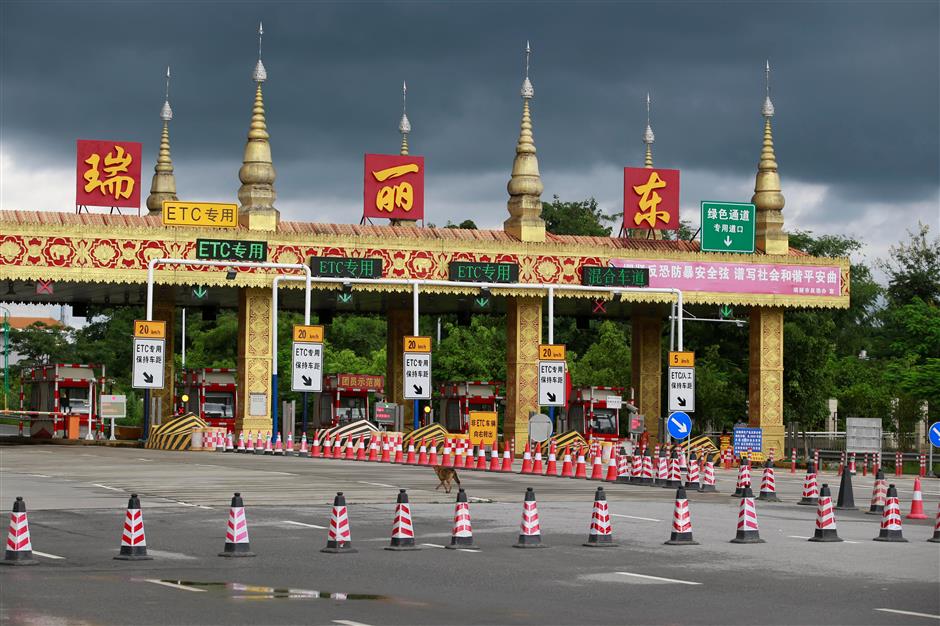 The expressway toll gates for entry into Ruili City in the southwest Yunnan Province are closed as the city authorities announced a lockdown following reports of imported cases.

China has locked down a city on the border with Myanmar and will launch a mass coronavirus testing program, officials said on Tuesday, after two imported infections from Myanmar were detected there.

The cases were found in the city of Ruili in the southwestern Yunnan Province, a major land border crossing point with neighboring Myanmar.

City officials said in a statement on Tuesday that residents were being told to stay home and people had been forbidden from entering or leaving the city without special reasons from Monday evening.

They said every resident would be tested for the virus in Ruili, which is home to more than 210,000 people, although no local transmission of the virus has been reported.

Businesses have been closed except for supermarkets, pharmacies and food markets. It also banned vehicles from the streets for the duration of testing, unless delivering essential items.

The infections were brought in from Myanmar and Chinese authorities would “crack down on illegal immigrants,” the officials said.

Ruili is separated by a shallow river from the border town of Muse, Myanmar’s main gateway to China.

Yunnan’s rugged 4,000-kilometer border with Laos, Myanmar and Vietnam makes it tough for authorities to step up surveillance and cut illegal immigration as thousands pour into China, seen as a safe haven in the global pandemic.

Yang Bianqiang, vice mayor of Ruili, said that the city would repatriate those who cannot verify their time of arrival into China, “have no fixed residence and have no fixed place to work.”

Chinese Embassy officials in Myanmar have held talks via teleconference with the country’s authorities to beef up joint efforts for disease control and prevention, the embassy said on its website.

Chinese officials have said areas on the Myanmar border should put the fight against the disease on a wartime footing.

Myanmar has seen a surge in new coronavirus cases. The Southeast Asian nation of some 55 million had weathered the epidemic relatively well until late August, with case numbers under 400 and just six deaths.

But in under four weeks infections have steadily spread, jumping to 3,299 cases and 32 deaths by Tuesday.

So far, commercial hub Yangon, capital Naypyidaw and conflict-stricken Rakhine state are all under lockdown.