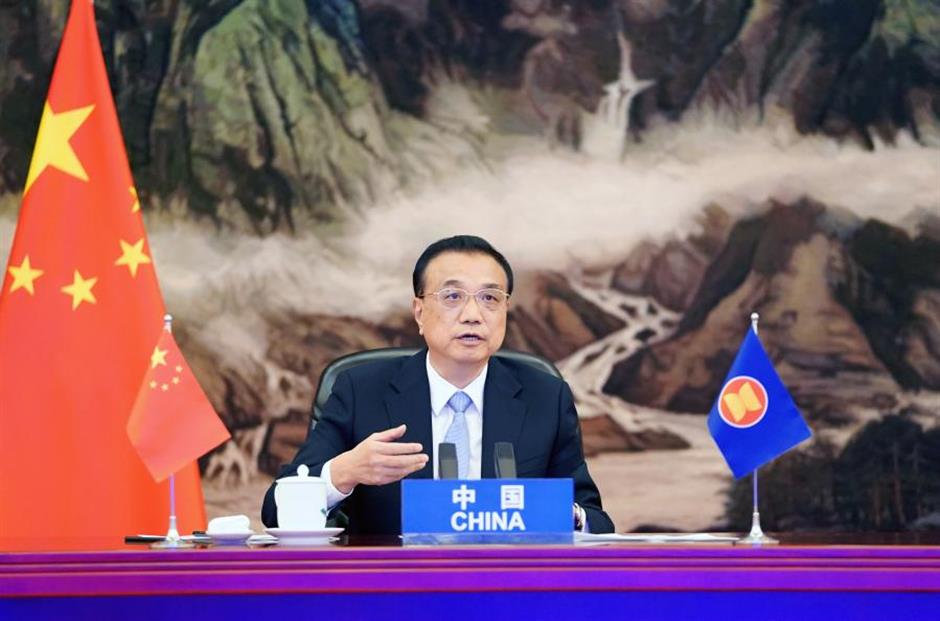 Chinese Premier Li Keqiang attends the 15th East Asia Summit via video link at the Great Hall of the People in Beijing, capital of China, Nov. 14, 2020.

Chinese Premier Li Keqiang on Saturday called for solidarity, the focus on development and expanded cooperation to join hands in countering the challenges amid the ravaging COVID-19.

Noting pursuing peace and development and promoting cooperation represent the overriding trend of the times amid challenges brought by the COVID-19 pandemic, Li said all parties should "stay united, focus on development, expand cooperation and join hands in prevailing over difficulties."

Hailing the balanced efforts of the summit over the past 15 years in advancing political and security cooperation as well as economic and social development, the premier made three proposals in terms of crisis response and cooperation facilitation.

Second, Li said the summit should strengthen policy coordination to forge the joint force of economic recovery, urging a regional network of "fast lanes" of personnel exchanges and "green lanes" of logistics to ensure the stable and smooth running of industrial and supply chains.

Third, the premier called on all parties to engage in pragmatic cooperation to enhance the capacity of sustainable development, pledging China's further efforts in climate change, anti-terrorism, cyber security and other areas of cooperation.

Pertaining to the issue of South China Sea, Li said China is firmly resolved in safeguarding the region's peace and stability, vowing China's endeavor in upholding the rule of law on the international stage, and working with the ASEAN countries to fully and effectively implement the Declaration on the Conduct of Parties in the South China Sea and steadily advance the Code of Conduct consultations.

Acclaiming the positive role of the summit in promoting regional peace, stability and prosperity, the participating leaders urged concerted efforts in fighting the pandemic and improving the resilience of public health. They also voiced support to the ASEAN playing the central role of the summit, and the steps of facilitating cross-border trade and interconnectivity to promote economic recovery in the post-pandemic era.