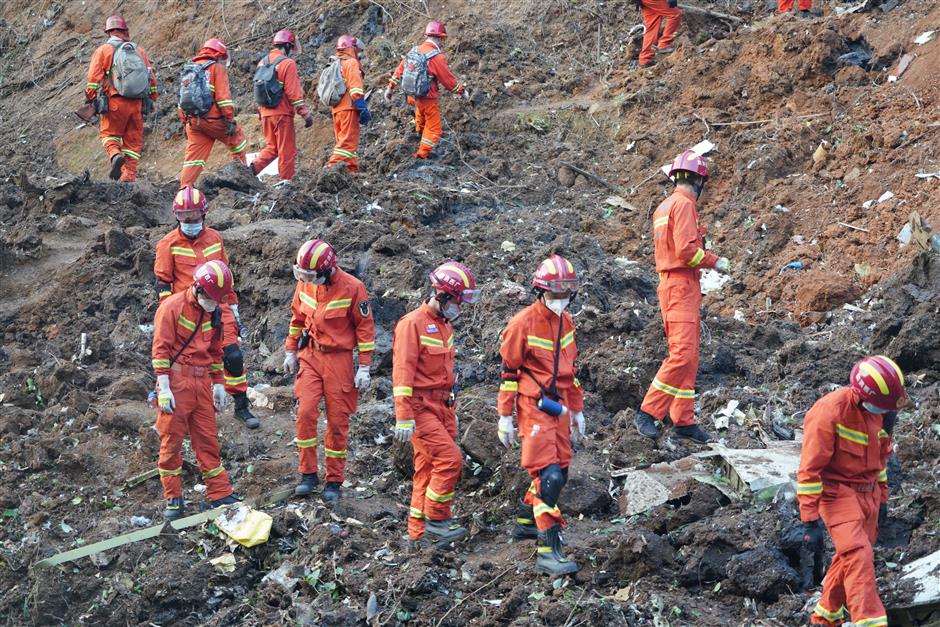 Rescuers search the crash site of a China Eastern flight in the Guangxi Zhuang Autonomous Region.

A China Eastern Airlines Boeing 737-800, with 132 people on board, crashed in mountains in southern China's Guangxi Zhuang Autonomous Region after a sudden descent from cruising altitude.

Media reports claimed there were no signs of survivors.

Flight MU5735 was en route from the southwestern city of Kunming, capital of Yunnan Province, to Guangzhou, capital of Guangdong, when it crashed.

China Eastern said the cause of the crash was under investigation.

The airline said it deeply mourned the loss of passengers and crew, without specifying how many people had been killed.

There were no foreign passengers on board the crashed aircraft, according to state broadcaster CCTV.

Chinese media showed brief highway video footage from a vehicle's dashcam apparently showing a jet diving to the ground behind trees at an angle of about 35 degrees off vertical.

The airline said it had provided a hotline for relatives of those on board and sent a working group to the site.

State media showed a piece of the plane on a scarred, earthen hillside. There was no sign of a fire or personal belongings.

The aircraft, with 123 passengers and nine crew on board, lost contact over the city of Wuzhou, China's Civil Aviation Administration of China and the airline said.

The flight left Kunming at 1:11pm, FlightRadar24 data showed, and had been due to land in Guangzhou at 3:05pm.

"Usually the plane is on auto-pilot during cruise stage. So it is very hard to fathom what happened," said Li Xiaojin, a Chinese aviation expert.

Online weather data showed partly cloudy conditions with good visibility in Wuzhou at the time of the crash.

Following the crash, China Eastern grounded its fleet of 737-800 planes. Those currently in operation will be grounded after landing, according to China's state broadcaster CCTV.

It led to the cancelation of 1,786 flights as of 7pm yesterday, and another 1,757 flights for today, accounting for over 80 percent of its scheduled flights.

The 737-800, belonging to the 737NG aircraft family, is one of the mainstream single-aisle passenger aircraft operated by domestic airlines, and also one of the most popular narrow-body aircraft in the world.

According to statistics, domestic airlines operate about 1,400 Boeing 737NG aircraft, about 37 percent of the total fleet.

"Before the cause of the accident is known, the suspension is a common occurrence to prevent risks," said Li Xiaoguang, a professor at Qingdao University and a civil aviation expert.

President Xi Jinping said in an instruction that he was shocked to learn about the crash. He ordered the immediate launch of an emergency response, all-out search and rescue efforts and the proper settlement of the aftermath.

Xi ordered swift action to be taken to identify the cause of the crash and to strengthen the safety overhaul of the civil aviation sector to ensure the absolute safety of the sector and people's lives.

Premier Li Keqiang urged efforts to console the families of the victims and provide them with assistance, release accurate information in a timely manner, conduct a serious probe into the incident, and take strong measures to strengthen the safety of civil aviation.

A Boeing spokesperson said: "We are aware of the initial media reports and are working to gather more information." 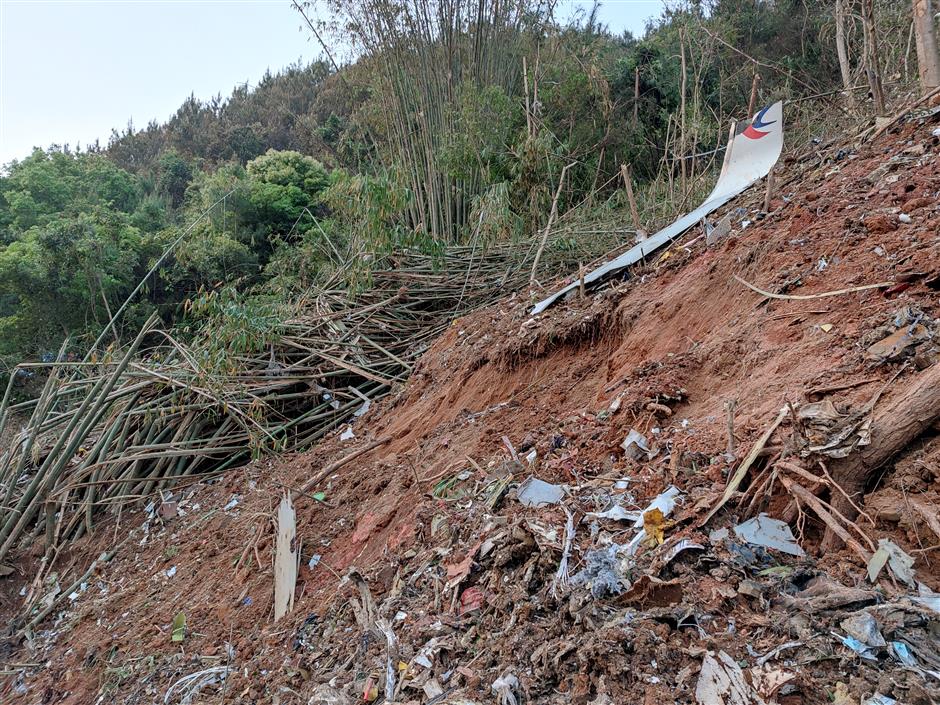 Part of a plane wreck that has a China Eastern logo on it.

China's airline safety record has been among the best in the world for a decade.

Investigators will search for the plane's black boxes – the flight data recorder and cockpit voice recorder – to shed light on the crash.

The US Federal Aviation Administration said it was ready to assist with China's investigation if asked.

According to Aviation Safety Network, China's last fatal jet accident was in 2010, when 44 of 96 people on board were killed when an Embraer E-190 regional jet flown by Henan Airlines crashed on approach to Yichun airport.

In 1994, a China Northwest Airlines Tupolev Tu-154 flying from Xian to Guangzhou crashed, killing all 160 on board in China's worst-ever air disaster, according to Aviation Safety Network.