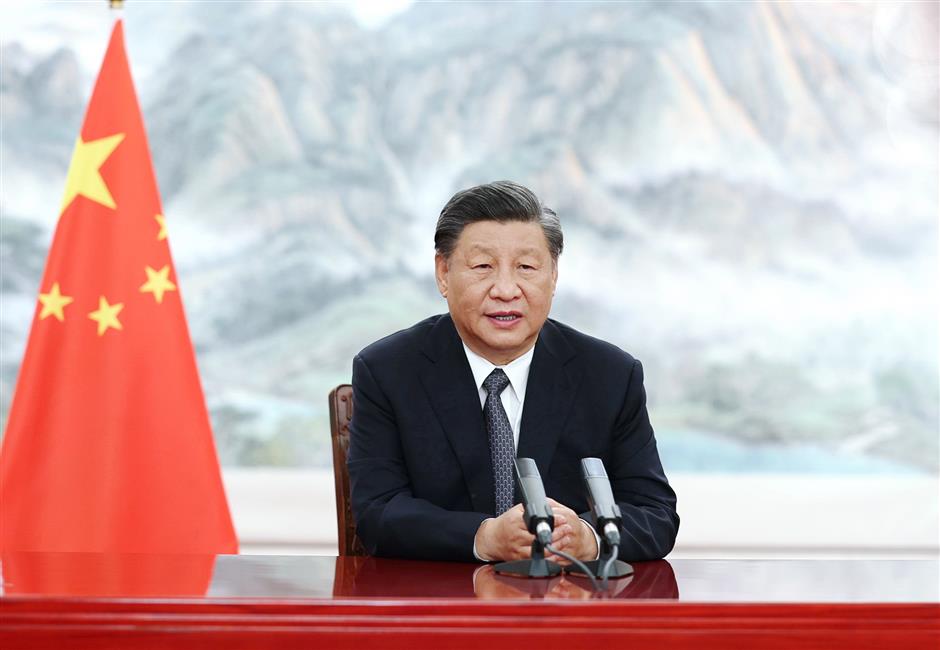 Chinese President Xi Jinping delivers a keynote speech at the opening ceremony of the BRICS Business Forum in Beijing via video link on Wednesday.

Chinese President Xi Jinping on Wednesday attended the opening ceremony of the BRICS Business Forum and delivered a keynote speech in Beijing via video link, urging its members to embrace solidarity and expand win-win cooperation and openness in the pursuit of peace, stability and sustainable global development.

"The historical trend of openness and development will not reverse course, and our shared desire to meet challenges together through cooperation will remain as strong as ever," Xi said, calling on BRICS countries to rise to challenge and forge ahead with resolve toward the goal of building a community with a shared future for mankind.

The BRICS mechanism, featuring five major emerging economies, namely Brazil, Russia, India, China and South Africa, has traveled a glorious path over the past 16 years since its inception in 2006, and has become a positive, stable and constructive force in international affairs.

We should embrace solidarity and coordination and jointly maintain world peace and stability," said Xi, adding that peace, which is the common cause of humanity, should be pursued and defended by all. He called on all countries to stay true to the pledge of the UN Charter and fulfill the mission of maintaining peace.

He said the tragedies of the past tell us that hegemony, group politics and bloc confrontation bring no peace or security, but will only lead to wars and conflicts. "The Ukraine crisis is another wake-up call for all in the world. It reminds us that blind faith in the so-called 'position of strength' and attempts to expand military alliances and seek one's own security at the expense of others will only land oneself in a security dilemma."

"We in the international community should reject zero-sum games and jointly oppose hegemonism and power politics. We should build a new type of international relations based on mutual respect, fairness, justice and win-win cooperation. We should be clear that we are a community in which all countries share a common stake, and we should see that the light of peace will reach all corners of the world," the Chinese president said.

Development holds the key to solving various difficult problems and delivering better lives to the people. In the speech, Xi pointed out that, at this time, the global development process has hit major roadblocks, and the global efforts to implement the UN 2030 Agenda for Sustainable Development have suffered major setbacks.

"Last year, I put forward the Global Development Initiative, and I called on all countries to implement the 2030 Agenda for Sustainable Development, forge united, equal, balanced and inclusive global development partnership, and promote cooperation in a wide range of areas such as poverty reduction, public health, education, digital connectivity and industrialization," Xi said.

He called on BRICS members to deepen cooperation to better safeguard food and energy security, seize opportunities presented by the new scientific and technological revolution and industrial transformation, help developing countries speed up development of the digital economy and green transformation, and engage in cooperation on COVID-19 response to beat the virus at an early date.

Noting that BRICS cooperation has now entered a new stage of high-quality development, Xi expressed the hope that business leaders will continue to act with tenacity and in a pioneering spirit, tap into the complementarity of BRICS countries' diverse economic structures and resources, upgrade cooperation on trade, investment and finance, expand cooperation on cross-border e-commerce, logistics, local currencies and credit rating, and keep industrial and supply chains safe and unclogged.

At present, some important industrial and supply chains are suffering from deliberate disruptions, commodity prices remain high and are fluctuating, global inflation keeps rising, the international financial market is in turmoil, and global economic recovery is losing steam.

At such a critical juncture, President Xi called on countries to strengthen macroeconomic policy coordination to prevent the slowdown and even halt of the global recovery, stay committed to openness and inclusiveness, eliminate all barriers to the development of productivity, and steer globalization in the right direction.

He said economic globalization is a response to development of productivity and, as such, represents an unstoppable historical trend. Anyone who attempts to turn back the wheel of history and block others' way will only have his own path blocked.

"We should uphold the WTO-centered multilateral trading system, remove barriers to trade, investment and technology, and keep the global economy open. We should promote extensive consultation and joint contribution to deliver shared benefits, enhance global economic governance, and increase the representation and say of emerging markets and developing countries," the Chinese president said.