On an early autumn morning, Shi Hui, a photographer from southwest China's Chongqing Municipality, came to the exhibition area of the former diesel engine factory in the ancient city of Pingyao, north China's Shanxi Province.

"This is a good opportunity to learn from photographers all over the country and the world, which can give me inspiration from composition, angle, and innovation," said Shi.

As a teacher at Sichuan Fine Arts Institute, Shi has come to Pingyao for the 10th time to participate in the Pingyao International Photography (PIP) Festival. This time, he brought the works of teachers and students from more than 10 local universities to the festival for exchange.

The 22nd PIP Festival kicked off on September 19 in Pingyao, a UNESCO world cultural heritage site known for its well-preserved ancient architecture, in Shanxi Province.

Themed "A world of light and shadow, for a bright shared future," this year, the week-long festival has attracted more than 12,000 works by 1,200 photographers from 28 countries and regions.

Launched in 2001, the annual festival has attracted photographers from more than 100 countries and regions and is considered an important platform for cross-cultural communication.

"Every time I go to Pingyao, I find something new and different," said Susan Dooley, an American. When she first came to Pingyao more than 10 years ago, the environment of the ancient city was not very good and the exhibition hall was rather old.

Nowadays, the photography exhibition area is spacious and bright, the ancient city is classical and elegant, and there are theaters, shopping centers, and a high-speed railway station, which makes Dooley and her husband feel that this is a cosmopolitan place.

"The successful application of Pingyao ancient city as a world heritage site in 1997 opened a window. It was the PIP that really brought this city to the world." Wu Xiaodong, who has participated in the planning of more than a dozen photography festivals, said that many Chinese photographers' works have gone from Pingyao to the international stage, and foreign photography works have also entered the Chinese public's vision in Pingyao.

"Every step of PIP is a pioneer and a practitioner, embracing the imagination of every photographer," said Zhang Guotian, artistic director of the PIP Festival.

Wei Wentao, a photographer who returned from overseas, said that the works were exposed and presented in the dark room, showing that people posted the mobile phone screen repeatedly on social media, leaving images of virtual and real overlapping.

"We focus on the more possibilities that young people should have, and explore how creators face the new problems and challenges unique to this era," said Du Zi, the section curator. Du hoped the PIP would help young people move to a broader stage.

Sun Xiaolu, who was a photographer when she was a student and now is a university teacher, has witnessed the significance of PIP for photographers and curators.

"Pingyao has become a culture brand that epitomizes Chinese photography and even world photography," said Sun, who once again participated in PIP as the curator of a women-themed exhibition.

With the help of modern light and shadow technology, the ancient town of Pingyao has rapidly built its reputation and influence at home and abroad.

French photographer Michele Terminet Schuppon has been to Pingyao multiple times to find the stories behind the ancient town, taking photos of an old vendor, a barber, and a sedan bearer dressed in ancient costumes. In 2015, she held a photography exhibition in France introducing the ancient oriental town to locals.

While the photography exhibition is going global, it has also injected fresh energy into the local development of Pingyao and brought great changes.

Zhang Shuai, manager of Jinsheng Food Shop, a time-honored brand on the South Street of the ancient town, said that during the PIP, there are more tourists and customers. Many customers would try his products and buy them again online.

Xiao Sanyuan, a Pingyao native who was a tourist car driver and later worked as a booth builder at the PIP, is now in charge of an exhibition services company. "The festival changed my life," said Xiao, whose photography works have been exhibited at the PIP.

The openness of Pingyao ushered in a new life for the ancient town. With the improvement of water, electricity, and other infrastructure, residents now live a more convenient life in the ancient town. 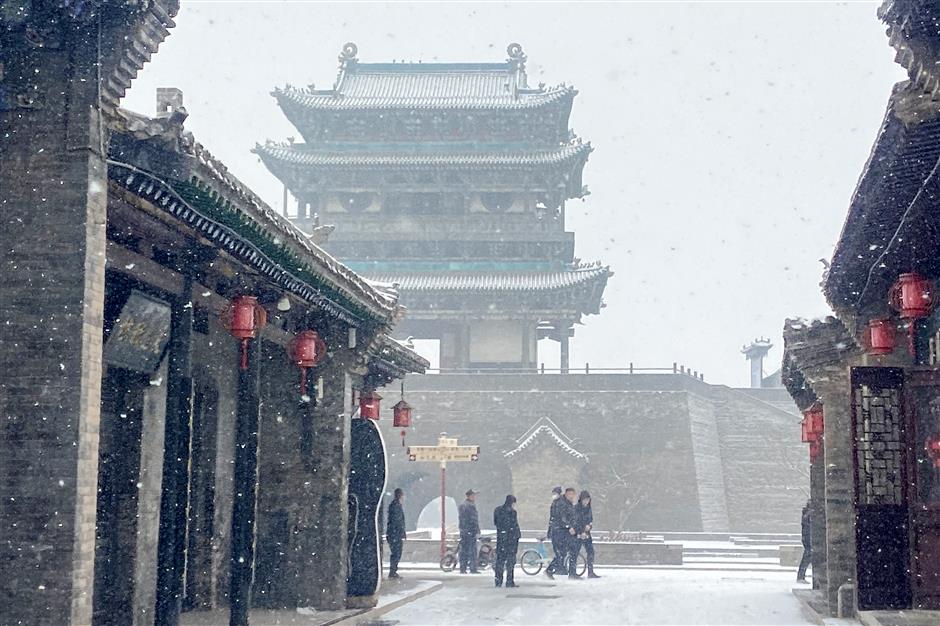