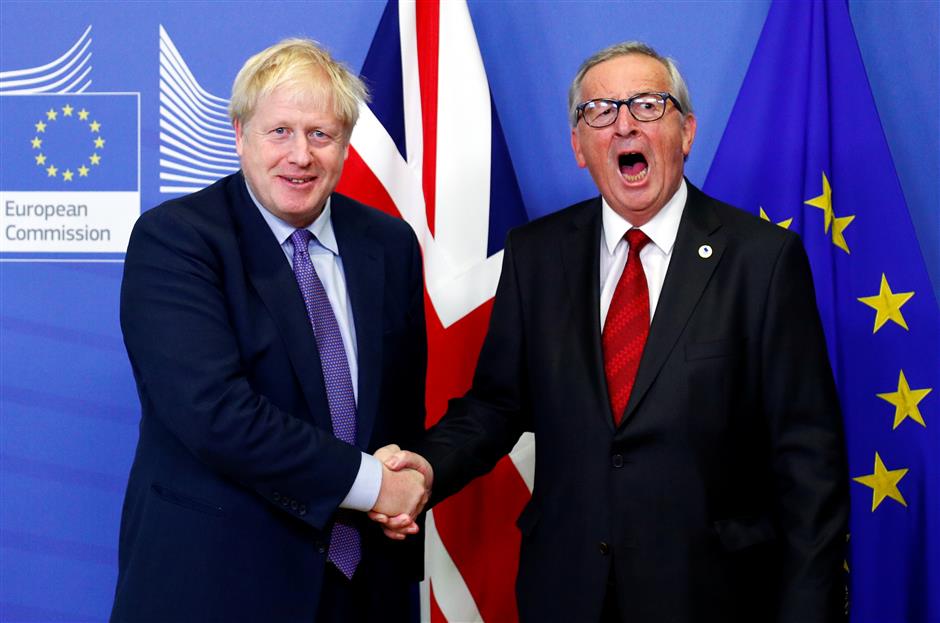 Britain secured a Brexit deal with the European Union yesterday, more than three years after Britons voted to leave the bloc, but Prime Minister Boris Johnson must still win a knife-edge vote in parliament to get the agreement approved.

The deal comes after years of divisive and frequently acrimonious discussions with the EU, including successive days of late-night talks this week.

“Where there is a will there is a deal — we have one!” European Commission President Jean-Claude Juncker said in a tweet a few hours before the start of an EU summit in Brussels.

At a news conference with Johnson, Juncker said the deal meant there would be no need for a further delay to Britain’s departure and negotiations on the future relationship between Britain and the EU would begin as soon as the deal was approved by the UK and European parliaments.

“Now is the moment for us to get Brexit done and then together to work on building our future partnership, which I think can be incredibly positive both for the UK and for the EU,” Johnson said, praising both Juncker and the EU’s chief negotiator, Michel Barnier, for their efforts.

“I hope very much ... that my fellow MPs in Westminster do now come together to get Brexit done, to get this excellent deal over the line and to deliver Brexit without any more delay.”

Juncker said he would recommend that leaders of the other 27 member states approve the deal.

“There must be no prolongation — it has to happen now,” he said of the deal, ruling out any extension of talks.

“I’m satisfied that we were able to find a deal. I’m sad that Britain will be leaving the European Union,” he said, adding that Johnson agreed that there should be no more delay.

Before EU leaders sat down for their summit, Johnson went around the table shaking hands with them one by one. He also spoke briefly with Merkel and Macron, with all three laughing and smiling.

Johnson must now secure approval for the agreement in an extraordinary session of parliament tomorrow, which would pave the way for an orderly departure on October 31. But getting the votes is uncertain.

The Northern Irish party that Johnson needs to help ratify any agreement, the Democratic Unionist Party, has refused to support it, saying it is not in Northern Ireland’s interests.

The head of the main opposition Labour Party, Jeremy Corbyn, said he was “unhappy” with the agreement and would vote against it.

Labour has said it wants any deal to be subject to a public vote, but as yet has not indicated whether it will back any move for a second referendum tomorrow.

Johnson appears intent on presenting parliament with a stark choice — the deal he has struck or no deal — in the hope of securing enough votes to get approval, sources said. He has said he will not ask for a delay — even though parliament has passed a law to oblige him to do so if it has not finalized a deal by Saturday.

Negotiators worked frantically this week to agree a compromise on the question of the border between EU member Ireland and the British province of Northern Ireland, the most difficult part of Brexit.

The conundrum was how to prevent the frontier becoming a backdoor into the EU’s single market without erecting checkpoints that could undermine the 1998 Good Friday Agreement, which ended decades of conflict in the province.

The agreement reached will keep Northern Ireland in the UK customs area but tariffs will apply on goods crossing from mainland Britain to Northern Ireland if they are headed to Ireland and into the bloc’s single market.

The agreement scraps the “backstop,” a mechanism envisaged earlier that was designed to prevent a hard border being introduced on the island of Ireland, and would have bound Britain to some EU rules.

However, the DUP, which supports Johnson’s government, said the new text was not acceptable — a step that could spur hardline Brexiteers in his Conservative party also to oppose ratification.

“These proposals are not, in our view, beneficial to the economic wellbeing of Northern Ireland,” the party said, warning that a parliamentary vote on Saturday was just the first stage in approving the deal.

Johnson has no majority in the 650-seat parliament, and in practice needs at least 318 votes to get a deal ratified. The DUP has 10 votes.

Arriving at the Brussels summit, several EU leaders expressed happiness that a deal had been struck but cautioned that it still faced hurdles in the British parliament.

In a note, Deutsche Bank saw a 55 percent chance that Johnson’s deal would not be ratified tomorrow.

The uncertainty over parliament’s approval means that, two weeks before the latest date for the United Kingdom’s departure from the world’s largest trading bloc, the possible outcomes still range from an orderly departure to a chaotic exit or even another referendum that could reverse the entire endeavor.

The deal will minimise much of Brexit’s short-term impact on the economies of Ireland and Northern Ireland, Irish Finance Minister Paschal Donohoe said yesterday.

“There is no form of Brexit that is as good as the United Kingdom deciding to stay in the European Union, but we respect the views of the British people,” Donohoe told reporters.

“I do believe that this deal, if ratified and put in place, will minimise many of the short-term impacts on the Irish economy and on the all-Ireland economy.”

“We will hold our European Council and of course the news of the day is that an agreement has successfully been struck between the British government and the European Commission. We are currently examining it and we will form our opinion but of course we already know large parts of this agreement already so it’s good news.”

“Of course the parliaments — the European parliament and the British parliament — now need to approve it.”