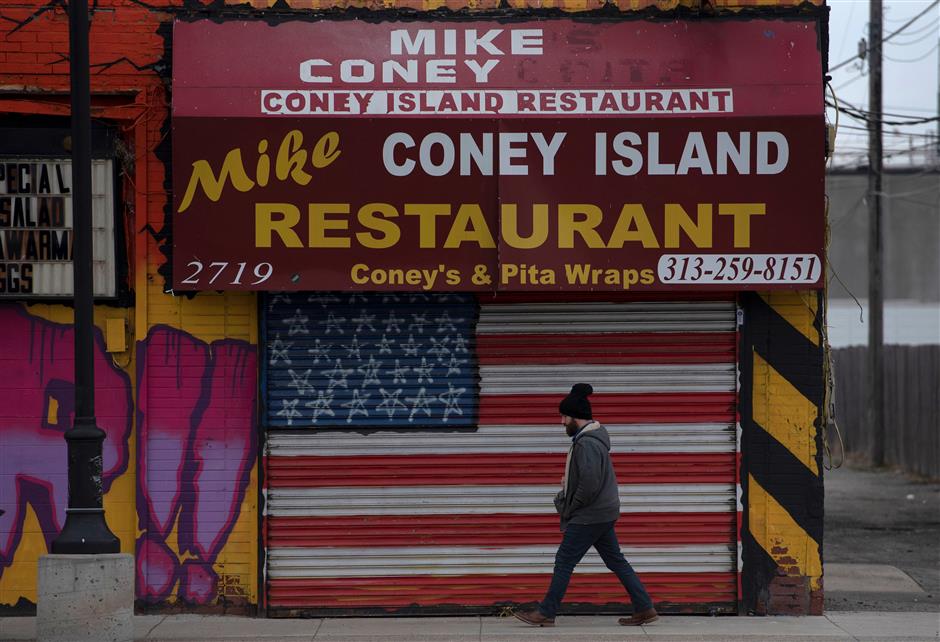 A man passes a closed restaurant near the Eastern Markets in Detroit, Michigan. Another 6.65 million United States workers filed for unemployment benefits last week, the most ever recorded, as the novel coronavirus pandemic forces businesses to shut down across the US, the Labor Department reported yesterday.

The number of Americans filing claims for unemployment benefits shot to a record high of more than 6 million last week as more jurisdictions enforced stay-at-home measures to curb the novel coronavirus pandemic, which economists say has pushed the economy into recession.

Yesterday’s weekly jobless claims report from the Labor Department, the most timely data on the economy’s health, reinforced economists’ views that the longest employment boom in United States history probably ended in March.

Initial claims for state unemployment benefits surged 3.34 million to a seasonally adjusted 6.65 million for the week ending on March 28, the government said.

Data for the prior week was revised to show 24,000 more applications received than previously reported, lifting the number to 3.3 million.

Economists had forecast claims would jump to 3.5 million in the latest week, though estimates were as high as 5.25 million.

“Similar to last week’s unemployment claims numbers, today’s report reflects the sacrifices American workers are making for their families, neighbors, and country in order to slow the spread,” US Labor Secretary Eugene Scalia said in a statement.

The US has the highest number of confirmed cases of COVID-19, the respiratory illness caused by the virus, with more than 214,000 people infected. Nearly 5,000 people in the country have died from the illness, latest data suggest.

The dollar was little changed against a basket of currencies. US Treasury prices were trading higher while US stock index futures pared gains.

Applications for unemployment benefits peaked at 665,000 during the 2007-2009 recession, when 8.7 million jobs were lost. Economists say the country should brace for jobless claims to continue escalating, partly citing generous provisions of a historic US$2.3-trillion fiscal package signed by President Donald Trump last Friday and the federal government’s easing of requirements for workers to seek benefits.

As a result, self-employed and gig workers who previously were unable to claim unemployment benefits are now eligible. In addition, the unemployed will get up to US$600 per week for up to four months, which is equivalent to US$15 per hour for a 40-hour workweek. By comparison, the government-mandated minimum wage is about US$7.25 per hour and the average jobless benefits payment was roughly US$385 per person per month at the start of this year.

“Why work when one is better off not working financially and healthwise?” said Sung Won Sohn, a business economics professor at Loyola Marymount University in Los Angeles.

Last week’s claims data has no bearing on the closely watched employment report for March, which is scheduled for release today. For the latter, the government surveyed businesses and households in the middle of the month, when just a handful of states were enforcing “stay-at-home” or “shelter-in-place” orders.

It is, however, a preview of the carnage that awaits. Retailers, including Macy’s, Kohl’s Corp and Gap Inc, said on Monday they would furlough tens of thousands of employees, as they prepare to keep stores shut for longer.