New York City ventured into a crucial stage of reopening as stores let people in on Monday, offices brought workers back, restaurants seated customers outdoors and residents both welcomed and worried about rebounding from the nation’s deadliest coronavirus outbreak.

From Macy’s “Miracle on 34th Street” store to the World Trade Center’s office towers, the city was getting back to business, though with new virus-safety measures after a three-month shutdown.

Larry Silverstein, for one, couldn’t wait.

The 89-year-old World Trade Center developer was eager to return to his office there as Silverstein Properties staffers started coming back on staggered schedules on Monday. Employees have to wear masks in the 7 World Trade Center lobby, and footprints mark where to stand in elevators now limited to about a quarter of their usual capacity.

To Silverstein, returning to office life and in-person teamwork brings “a joy, a fulfillment, such a sense of being able to function.” He doesn’t buy into arguments that the pandemic bodes poorly for office work or New York City.

“I went through 9/11. I remember people telling me we were never going to be able to get people to come back to lower Manhattan,” said Silverstein, who leased the twin towers six weeks before the 2001 terrorist attacks destroyed them. “Never bet against New York, because New York always comes back, bigger and better than ever before.” 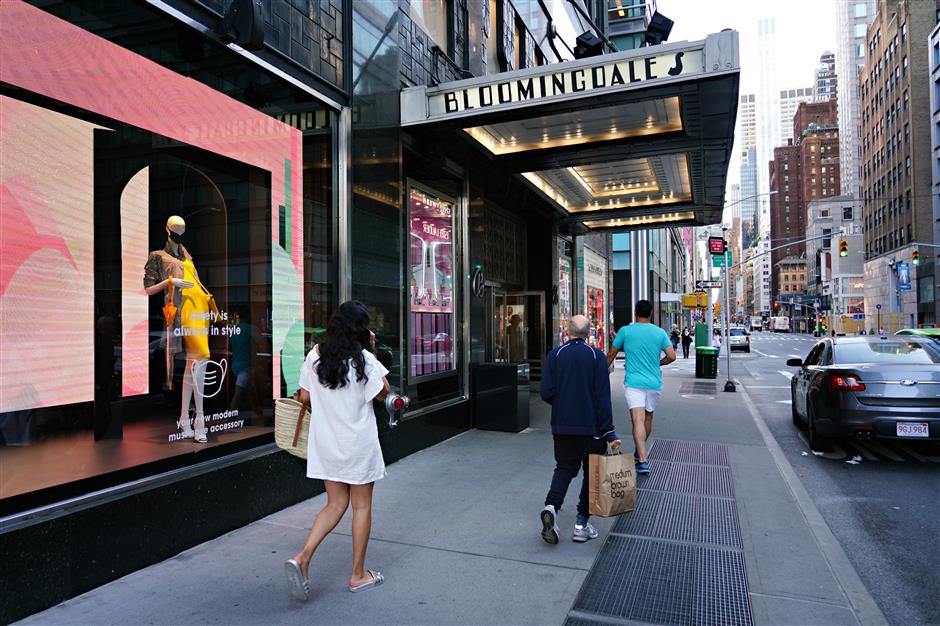 People walk in front of Bloomingdale’s on Monday.

At Macy’s famous flagship store, Tammi Marilus was in line when doors opened at 11am.

Still, with the store reopening, “it feels like it’s coming back to normal, even though we all know it isn’t over yet,” said Marilus, 42, who brought hand sanitizer with her and was pleased to see workers disinfecting counters.

“We have to live our lives. We have to take risks,” she said.

But some New Yorkers were apprehensive.

Alex Michaels may return soon to a retail job. He agreed it’s important to revive the economy, but he worries about potential coronavirus exposure from working with the public, even with new safety measures.

Eve Gonzalez, who’s not yet back at her food-industry job, feels it’s too soon to relax restrictions.

“I’m dying to go out, but people’s health is more important,” said Gonzalez, 27.

The virus has been blamed for over 22,000 New York City deaths, with the toll down to single and low double digits in recent days. Infections have plummeted from an early-April peak, but the last two weeks have still averaged about 250 positive tests a day, city data shows.

A woman has her temperature taken before she enters the Apple store on Fifth Avenue.

Reopening began on June 8 with construction, curbside-pickup retail, wholesaling and manufacturing. The city estimated 150,000 to 300,000 additional workers would return to their jobs on Monday.

Meanwhile, cooped-up kids finally could climb playground monkey bars instead of apartment walls. And shaggy heads could get salon haircuts.

Victor Suarez had a socially distanced full house for much of the afternoon at his barbershop in Queens’ East Elmhurst neighborhood.

“It’s a lot of changes, a lot of rules we have to follow,” Suarez said. “But it’s the new normal. We’re excited to be back.”

Monday marked just the second of four reopening phases, but Mayor Bill de Blasio called it “the biggest step,” particularly for a restaurant industry he described as “so much the identity of New York City.”

At Melba’s in Harlem, customers filled the 62 new outdoor seats faster than expected on Monday afternoon.

“It’s like a dream come true,” said owner Melba Wilson, president of the NYC Hospitality Alliance. She said outdoor dining was “the infusion that we so greatly needed” after three months of struggling to get by on takeout and delivery.

Hours later, de Blasio and wife Chirlane McCray came for dinner on a patio set up in a former parking spot outside Melba’s. 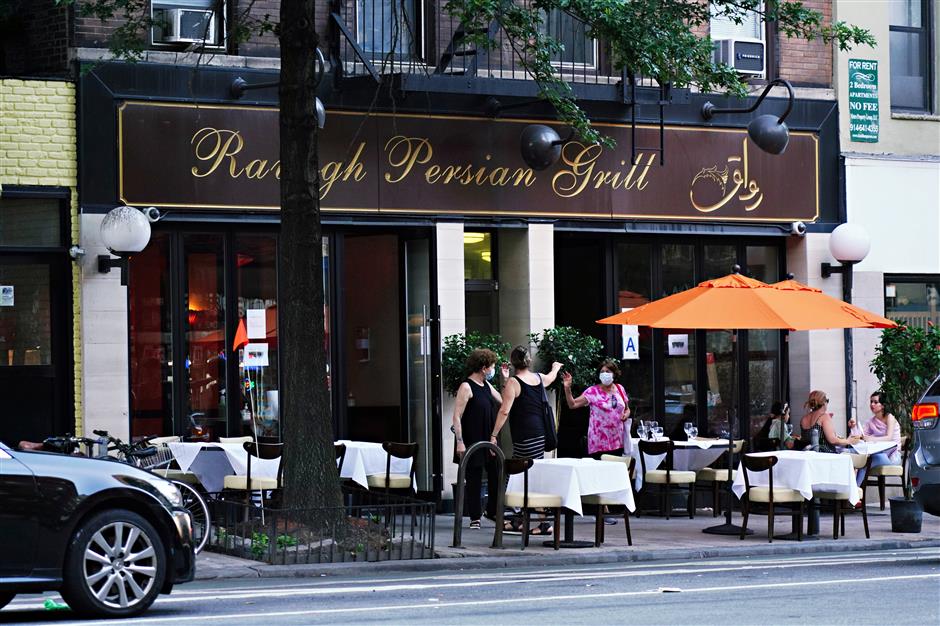 A restaurant serves customers seated at outside tables.

Lawyer Greg Nespole went in to work near Wall Street feeling it was “about time to return to normalcy.”

“You don’t really feel like a lawyer practicing in your kid’s bedroom,” Nespole said.

Some of the city’s biggest corporate employers are sticking with largely remote work for now.

Only about 5 percent of Citi’s 13,300 New York City employees are expected back at the bank’s offices on July 1. JPMorgan Chase hasn’t set a date yet for returning to its New York offices; Wells Fargo’s time frame is July 31 or later. Pharmaceutical company Pfizer is extending remote working at least until the as-yet-undetermined date for city’s next reopening phase.

With work-from-home arrangements now established and employees concerned about offices, public-transit commutes and child care, many white-collar companies are “moving with caution and safety,” says Bhushan Sethi, a PwC partner specializing in workplace strategies. The consulting and accounting firm is not yet reopening its own New York office.

As the city reopens, retail worker William Rodgers is figuring out his next steps.

The last three months have not been easy, but “a lot of us have gotten time to reflect on our own lives,” said Rodgers, 29. “That’s one blessing.” 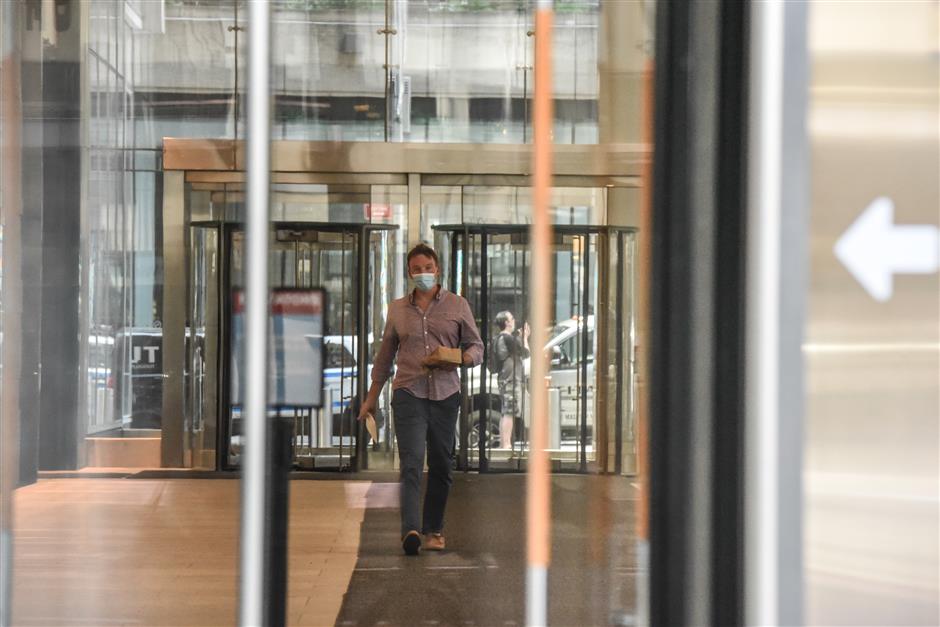 A person walks through an office building lobby on Monday in the Midtown neighborhood in New York City.