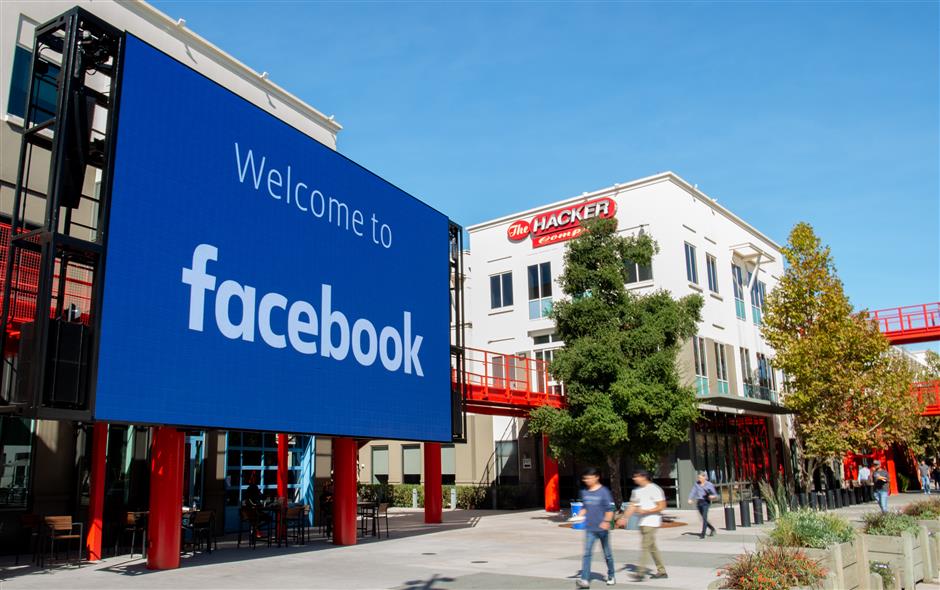 In this file photo taken on October 23, 2019, a giant digital sign is seen at Facebook's corporate headquarters campus in Menlo Park, California.

The advertiser boycott of Facebook has morphed into a global digital activist campaign aimed at curbing hateful and toxic content on the social media giant. But its impact remains unclear.

The unprecedented move has been joined by major brands like Unilever, Starbucks, Levis and Coca-Cola, with nearly 200 firms pausing advertising on the world's leading social network, and has wiped out billions in Facebook's market value.

Some companies have signed on to the #StopHateForProfit campaign organized by social justice activists, while others have simply acted on their own to avoid the toxic atmosphere of Facebook.

Ford, for example, said it would pause all social media advertising to "reevaluate our presence on these platforms," adding that "content that includes hate speech, violence and racial injustice on social platforms needs to be eradicated."

The boycott gained momentum amid the latest civil unrest as activists have pressed Facebook to be more aggressive in curbing racism and inflammatory content, including from President Donald Trump.

"Non-profit groups are appealing to advertisers to police social media, given the general reluctance or refusal of the companies to do so themselves. Indeed, all social media will be compelled to reexamine and adjust or adopt new policies that don't permit hate and racism to proliferate."

Michelle Amazeen, a Boston University professor of communication, said the latest action "suggests that social media need to take this issue seriously or it's going to affect their bottom line."

Amazeen added that the movement highlights that "long overdue pressure is finally mounting on social media platforms to be accountable gatekeepers and stop promoting hate and violence for profit."

The wave of announcements last week sent Facebook shares tumbling, leading to a loss of some US$50 billion in market value, with a partial bounceback on Monday.

Facebook appeared to respond on Friday by announcing it would ban a "wider category of hateful content" in ads.

Chief Executive Mark Zuckerberg said Facebook also would add tags to posts that are "newsworthy" but violate platform rules — following the lead of Twitter, which has used such labels on tweets from Trump.

Facebook has said it has invested heavily in efforts to stem racism in the wake of civil unrest triggered by the May 25 killing of African-American George Floyd at the hands of Minneapolis police.

Despite the boycott, Facebook boasts some 7 million advertisers on its network, with the vast majority small and medium-sized businesses.

Chiagouris said Facebook worldwide is likely to remain attractive for advertisers with no signs of a major decline in its audience.

The boycott "may lead to a softening of Facebook revenues a bit, but it will bounce back," he said.

"Rightly or wrongly, people are still in love with their Facebook accounts."

"We anticipate that most of the advertisers will return to Facebook given its more than 2.6 billion users. In the meantime, Facebook can take steps to demonstrate it will reduce hate speech further on the platform; although more content oversight could bring more regulatory risks to the forefront."

The boycott campaign, which has included the NAACP, Color of Change and the Anti-Defamation League, said it wants to keep the pressure on Facebook despite the changes announced last week

"None of these initial steps will make a significant dent in the persistent hate and racism so prevalent on the largest social media platform on the planet," the coalition said in a statement on Monday.

The group is pressing for a top-level executive "with deep civil rights expertise" to monitor Facebook's policies for discrimination and bias and an independent audit of "hate and misinformation."