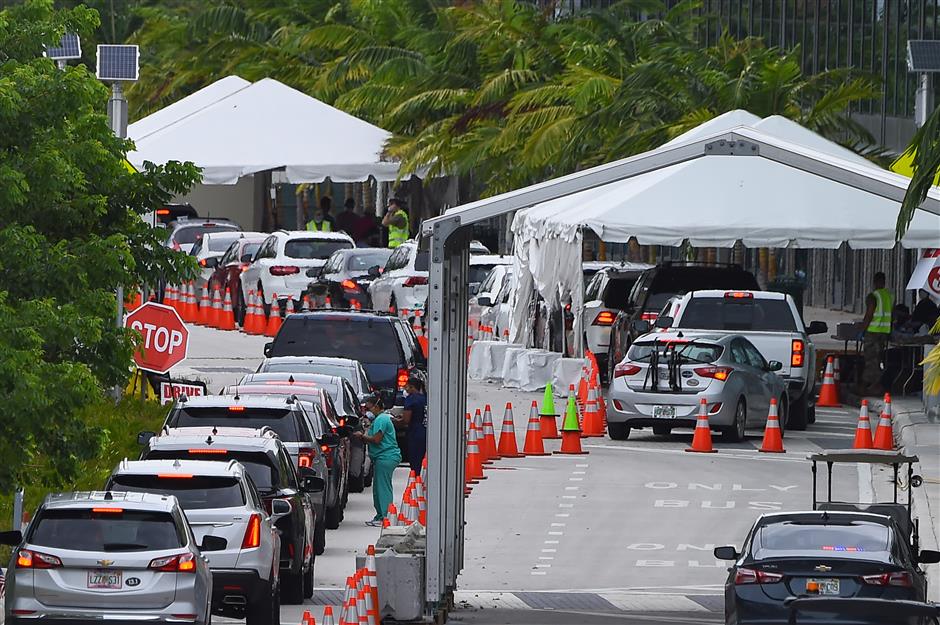 Cars line up for COVID-19 test at a "walk-in" and "drive-through" novel coronavirus testing site in Miami Beach, Florida, on July 22.

Florida has emerged as a major new epicenter of the US novel coronavirus battle, but two key weapons in the state's fight are misfiring badly: testing and contact tracing.

Health officials say that when a person is tested they need to get the results in 48 hours or less, so if they are in fact positive they can self-isolate right away and avoid infecting others.

But in the Sunshine State it is taking up to 10 days for results to return.

Such was the case of Gemma Garcia, a Spanish journalist who waited 11 days for her test results. During that span she practiced social distancing but did not quarantine.

Her test came back positive, and then she did isolate herself. "And I contacted all the people I had been with," said Garcia, who is 53. Luckily, they all came back negative.

This lag between testing and results coming back is one of the reasons Florida is a red hotspot in the pandemic — along with Texas and California — in the country hardest hit by the virus sweeping the globe.

Right now one of every 50 people in Florida is infected with the virus, and as of Tuesday it has killed more than 6,000 people. New cases are around 10,000 a day. The latest single daily death toll was a record 186.

"What do I do with a patient that I test today, and the results come back in three, four, five, six days — when between the test and the time of a positive result they have been with a load of people?" asked Alberto Dominguez-Bali, a doctor at Hialeah Hospital in Miami.

"That is poor management of the situation," he said.

With things so messy, people are pointing fingers searching for a culprit.

Two weeks ago Republican Governor Ron DeSantis, a firm ally of President Donald Trump and of reopening the economy despite the warnings of health experts, blamed the labs doing the testing.

DeSantis threatened to stop sending work to those labs that take a long time to return the results.

"You have somebody going through one of the sites, and then they get a result back 10 days later. That is not really going to be very helpful," he said.

Since then two big lab companies, Quest Diagnostics and LabCorp, said the government has allowed them to do what are called pool tests to save time.

This means several samples are combined and examined altogether. If that group tests positive, then the individual parts that compose it are tested one by one.

LabCorp told AFP this is helping to speed things up.

Who traces the contacts?

The testing-result lag time also makes contact tracing — which in other countries proved critical in controlling the pandemic — inefficient and unmanageable.

In the case of the journalist Garcia, for instance, none of the 14 people she told to get tested received a call from a contact tracer.

The Florida health department says on its website it has 1,600 employees doing tracing. Experts say it would need at least 6,300 for this state of 21 million people.

The approval rating for governor DeSantis has fallen over the past month over his handling of the crisis. Back in May he bragged that he had managed to control the pandemic in a speech in which he accused the media of spreading panic.

DeSantis has refused to make mask-wearing obligatory statewide, although some mayors have.

Florida, which charges no sales tax and lives off tourism, scrambled to bring back visitors in May and June as its economy tanked under lockdown measures and it seemed the pandemic was under control.

Now hospitals are running short of beds, intensive care units are packed, the jobless rate is climbing and the economy is a mess again.

"They simply were not ready. They didn't have enough people," Miami Beach Mayor Dan Gelber told MSNBC, referring to the state's health officials.

"If you can't reach out to the people who are positive and guide them into the people they had contact with, and do that investigation at all, you're basically just letting the virus run wild," Gelber said.