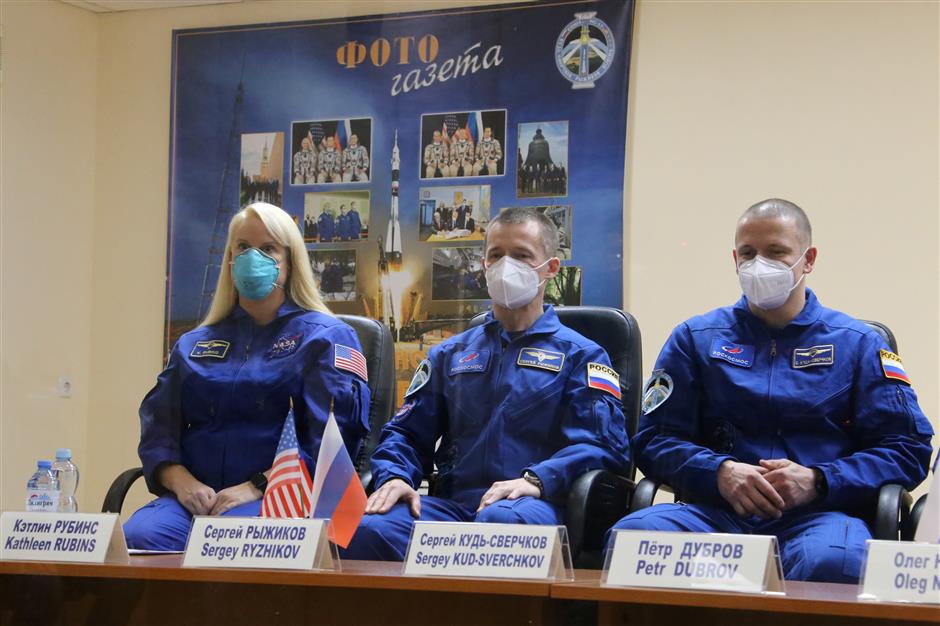 Cosmonauts of the Russian space agency Roscosmos Sergey Ryzhikov, Sergey Kud-Sverchkov and NASA astronaut Kathleen Rubins attend a news conference ahead of their launch to the International Space Station, at the Baikonur Cosmodrome, Kazakhstan on Tuesday.

Russia is unlikely to participate in the moon-orbiting station planned by the United States, a Russian official said on Monday, marking the probable end of the type of close cooperation seen for two decades on the International Space Station.

The proposed new station, called the Gateway, “is too US-centric, so to speak,” Dmitry Rogozin, the head of the Russian space agency Roscosmos, said, adding Russia was “likely to refrain from participating in it on a large scale.”

Speaking by videolink to the 71st International Astronautical Congress, Rogozin pointedly described the ISS as “a truly international project” — it was built by the two nations and has been occupied by Russians and Americans since 2000.

Europe, Canada and Japan also participate in the ISS.

The ISS has avoided the sharp deterioration of political relations between Moscow and Washington, with Roscosmos and NASA operating the station hand-in-hand and American astronauts using Russian rockets to get there since 2011.

But the ISS is nearing the end of its life, probably by 2030, and NASA has unilaterally launched a lunar exploration program without prior consultation with Russia and other partners.

The Gateway was announced under President Donald Trump as part of plans to return American astronauts to the Moon in 2024 — for the first time since 1972 — under a program dubbed Artemis.

NASA maintains that the project is an international collaboration. And it is seeking to involve other nations after Canada, Japan and Italy signed agreements.

Rogozin left open the chance of some future cooperation.

He said Russia supported “standardization of interfaces” that could allow Russian craft to dock at the station.

“A flight to the Moon is associated with a high risk,” he said.

“This is why we need to have at least two transportation systems.”