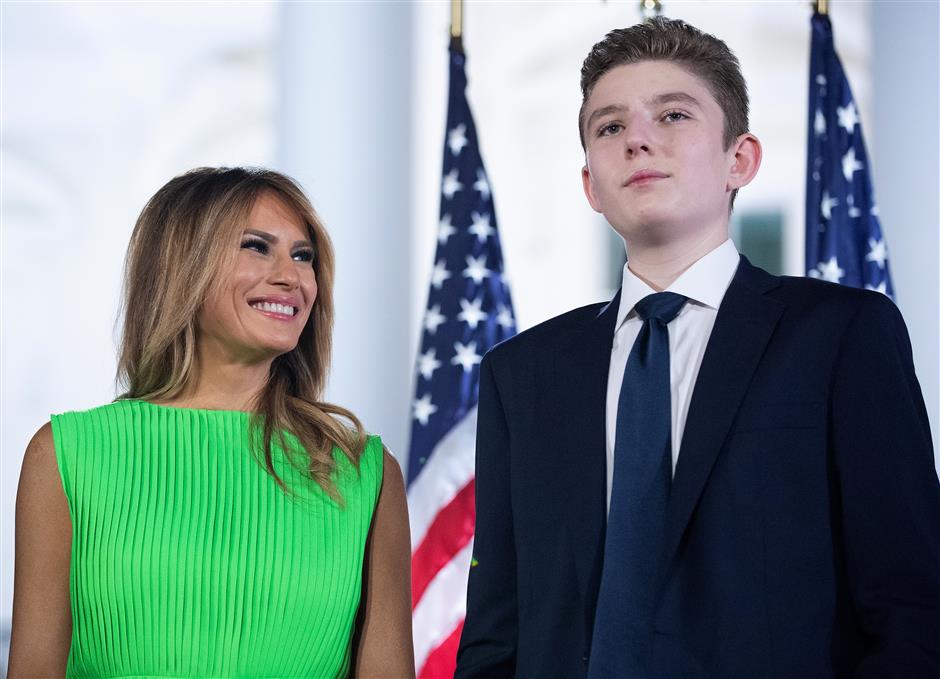 In this file photo taken on August 27, US First Lady Melania Trump looks at her son Barron Trump after President Donald Trump delivered his acceptance speech for the Republican presidential nomination on the South Lawn of the White House in Washington, DC.

Donald Trump's teenage son Barron contracted the novel coronavirus, First Lady Melania Trump revealed on Wednesday in a shocking piece of news underlining how much the Republican president is struggling to divert attention away from the pandemic in the final stages of his reelection fight.

Melania Trump wrote in a statement that after she and the president tested positive for COVID-19 two weeks ago, "Naturally my mind went immediately to our son."

She said the 14-year-old, who goes to a private school near Washington, did not experience symptoms and has since tested negative.

"Barron Trump, you know, he had the Corona 19," Trump said on Wednesday night at a rally in Iowa. "He had it such a short period of time I don't even think he knew he had it."

The news, which had been kept under wraps despite global attention on Trump's own health, thrust public attention firmly back on the pandemic and in particular on an outbreak within the supposedly highly secure White House over the last two weeks.

Trump, who spent three nights in hospital but returned to a punishing schedule of pre-election rallies on Monday, has been trying to move voters away from the subject in the closing 20 days of his campaign against Democratic frontrunner Joe Biden.

"Barron's fine," Trump told reporters earlier at the White House as he left for the rally in Iowa. Then he abruptly switched to his preferred subject of the expected confirmation by Senate Republicans of his conservative nominee for the Supreme Court, Amy Coney Barrett.

On Thursday, Trump and Biden will duel in an unusual manner when they hold separate but simultaneous town hall events on major TV networks.

The competing primetime appearances were organized after a head-to-head debate between Trump and Biden due to be held on Thursday was scrapped in the aftermath of Trump's COVID-19 diagnosis.

Trump negotiated to go on NBC at an outdoor setting in Miami after Biden had arranged his own event on ABC in Philadelphia.

In the past, Trump has appeared uncomfortable in town hall settings where ordinary voters ask questions. But as a former reality TV show star and a keen follower of viewing figures, the president will at least be keen to attract a bigger audience than Biden.

The two were meant to have met on stage for their second debate on Thursday in a town hall format where the two candidates would have fielded questions from voters.

However, in an unprecedented decision, debate organizers said they wanted to switch to a virtual format for safety reasons after Trump contracted the coronavirus. When he rejected the new conditions, the debate was called off.

NBC said it had received a statement from the clinical director at the National Institutes of Health, Anthony Fauci, that there was "a high degree of confidence" that Trump is now "not shedding infectious virus."

Trump and the NBC host will be socially distanced at the outdoor venue and the audience will wear masks, NBC added.

Biden has been frequently testing for coronavirus and reporting negative results since Trump's COVID-19 diagnosis on October 1.