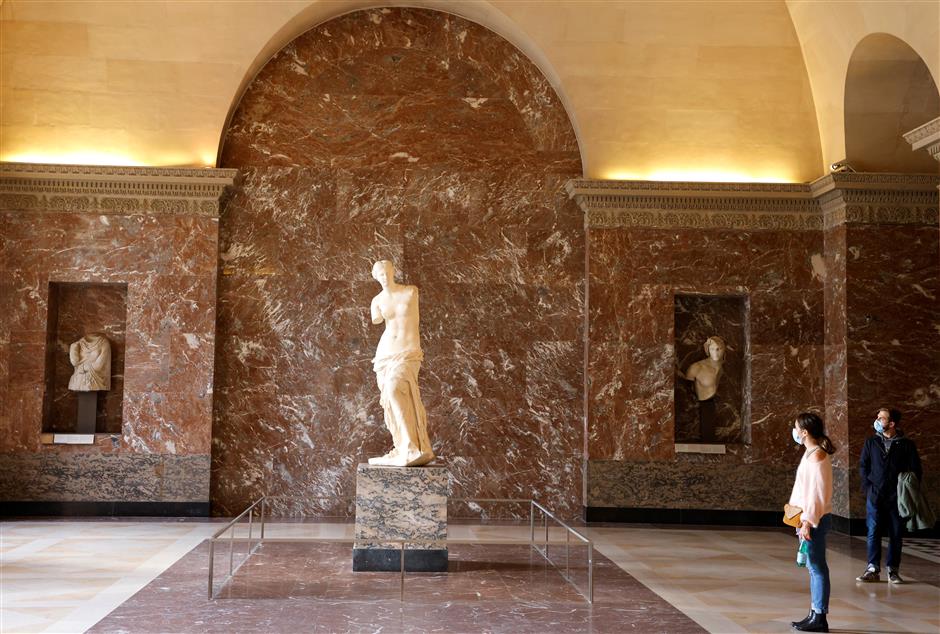 A visitor wearing a face mask looks at the Venus de Milo in The Louvre Museum, deserted by tourists due to the COVID-19 pandemic, in Paris on October 14, 2020.

France on Thursday reported its biggest daily infections with coronavirus, as 30,621 people have been tested positive in the past 24 hours, health authorities said.

The new daily record high came after the previous record of 26,896 reported on October 10.

The country now counts a cumulative total of 809,684 confirmed cases, while 1,586 clusters were under investigation, of which 130 were spotted in one day.

In this context, France will enter a 30-day state of emergency on Saturday. Authorities' extra power to deal with the virus resurgence "will last beyond if the parliament validates it," Castex told reporters in a weekly press meeting on the sanitary situation.

During the first wave of COVID-19, a state of health emergency was in effect across the nation from March 23 to July 10.

Curfews will be imposed in Paris and other eight major cities from 9 pm to 6 am to try to curb the spread of the epidemic. The night-time ban on movement will be introduced at midnight Friday and will remain in force at least for four weeks.

Early Thursday, Sanofi, the French pharmaceutical giant, and US Translate Bio said in a statement that the pre-clinical trials' results of a mRNA-based vaccine developed by the two companies "demonstrated a favorable immune response profile against SARS-CoV-2" in mice and in non-human primates.

"Two doses of MRT5500 induced neutralizing antibody levels significantly higher than those observed in COVID-19 patients," they said in a joint statement.

A Phase 1/2 clinical trial is anticipated to begin in the fourth quarter of 2020, they added.