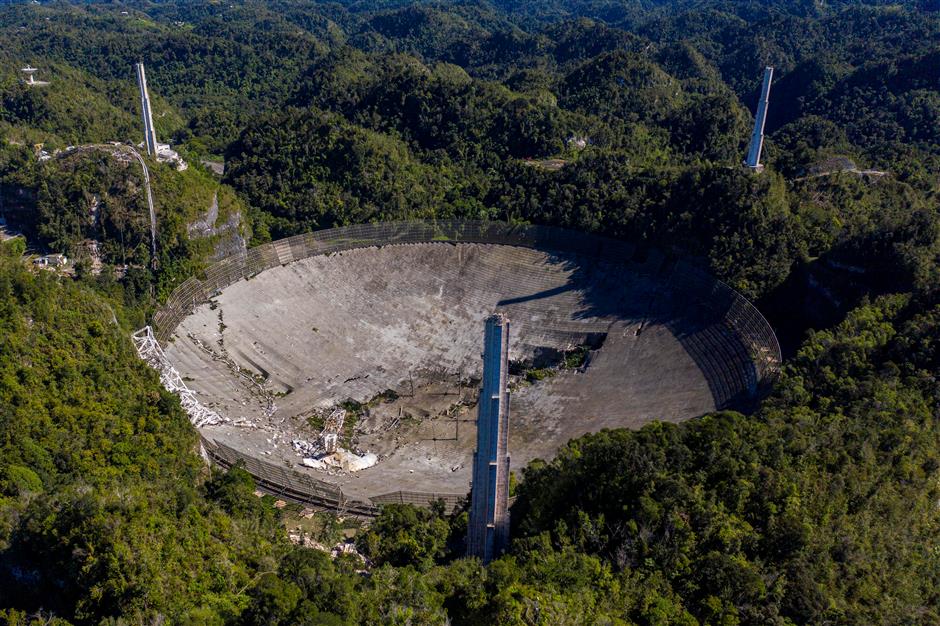 This aerial view shows the damage at the Arecibo Observatory after one of the main cables holding the receiver broke in Arecibo, Puerto Rico, on Tuesday.

A massive radio telescope at Puerto Rico’s Arecibo Observatory — one of the world’s largest — collapsed on Tuesday after sustaining severe damage since August, officials said, following 57 years of astronomical discoveries.

The deteriorating telescope’s 900-ton instrument platform, suspended by cables 137 meters above a 305 meters wide bowl-shaped reflector dish, fell on Tuesday morning, the US National Science Foundation said. No injuries were reported, it added.

The telescope, which received radio waves from space, had been used by scientists around the world to hunt for possible signatures of extraterrestrial life, study distant planets and find potentially hazardous asteroids. It also gained fame after pivotal scenes in the 1995 James Bond film “GoldenEye” starring Pierce Brosnan were shot there.

Two cables supporting the reflector dish had broken since August, causing damage and forcing officials to close the observatory as engineering firms retained by the University of Central Florida, which manages the observatory, studied ways to repair the damage.

In November, the engineering reviews led the NSF and the university to conclude that efforts to repair the structure would be too dangerous and that it would have to be demolished.

The collapse stunned many scientists who had relied on what was until recently the largest radio telescope in the world. “It sounded like a rumble. I knew exactly what it was,” said Jonathan Friedman, who worked for 26 years as a senior research associate at the observatory and still lives near it.

The collapse at 7:56am wasn’t a surprise because many of the wires in the thick cables holding the structure snapped over the weekend, according to Angel Vazquez, the telescope’s director of operations.

The observatory also includes other scientific assets such as a 12-meter telescope used for radio astronomy research and a facility used to study the Earth’s upper atmosphere and ionosphere.

The observatory’s learning center, located next to the telescope, sustained significant damage from falling cables, the NSF said.

“We are saddened by this situation but thankful that no one was hurt,” NSF Director Sethuraman Panchanathan said in a statement. “Our focus is now on assessing the damage, finding ways to restore operations at other parts of the observatory, and working to continue supporting the scientific community, and the people of Puerto Rico.”

The NSF said it will authorize the university to continue paying Arecibo staff and to come up with a plan to continue research at the observatory.