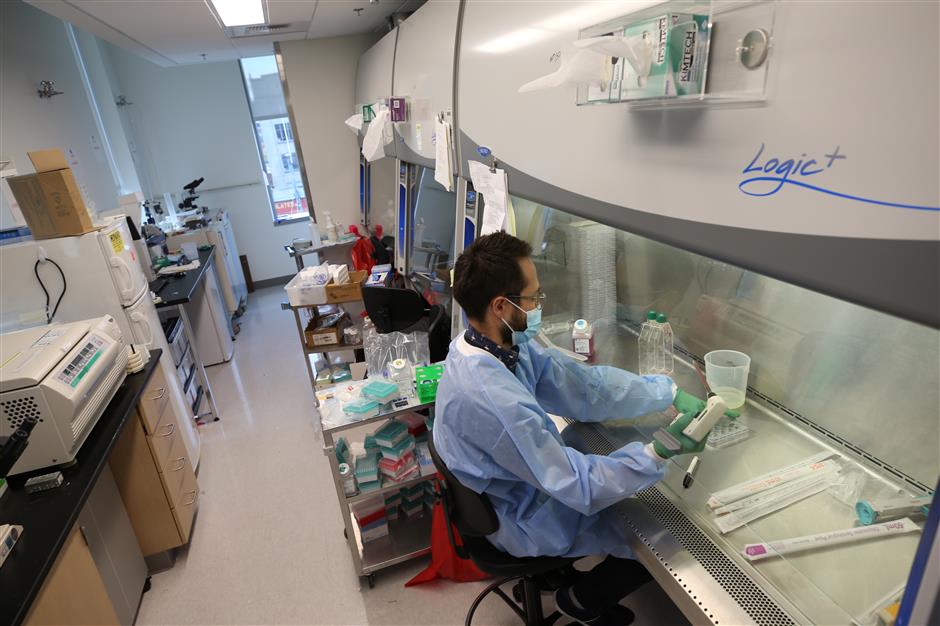 Dr Jesse Erasmus works on the development of a replicon, or replicating, RNA vaccine, used to combat COVID-19 (SARS-CoV-2), at a microbiology lab at the University of Washington School of Medicine on December 10 in Seattle, Washington.

An expert committee convened by the US Food and Drug Administration voted heavily in favor of recommending the Pfizer-BioNTech COVID-19 vaccine for emergency use approval on Thursday.

The final voting tally was 17 in favor, four against and one abstention.

The committee was tasked with answering whether, "based on the totality of scientific evidence available, the benefits of the Pfizer-BioNTech COVID-19 vaccine outweigh its risk for use in individuals 16 years of age and older."

The vote by the independent experts and researchers, including infectious disease specialists, biostatisticians and other scientists, isn't binding but the FDA is expected to follow the recommendation within the coming days.

Britain, Canada, Bahrain and Saudi Arabia have already approved the vaccine, the first in the world to complete a large-scale, Phase 3 clinical trial.

The full results of the trial, which included nearly 44,000 people, were published on Thursday in the New England Journal of Medicine, another major milestone.

These confirmed the vaccine was 95 percent effective with no serious safety issues, an outcome that was described in an accompanying editorial as a "triumph."

Pfizer scientist Kathrin Jansen told the panel this was a result of the innovative messenger RNA technology behind the vaccine, an approach that has never before been approved.

Britain on Wednesday reported that two health care workers developed significant allergic reactions to the vaccine as the country rolled out its massive drive on Tuesday.

The FDA will therefore include a warning label on the vaccine if it's approved, the agency's Marion Gruber said.