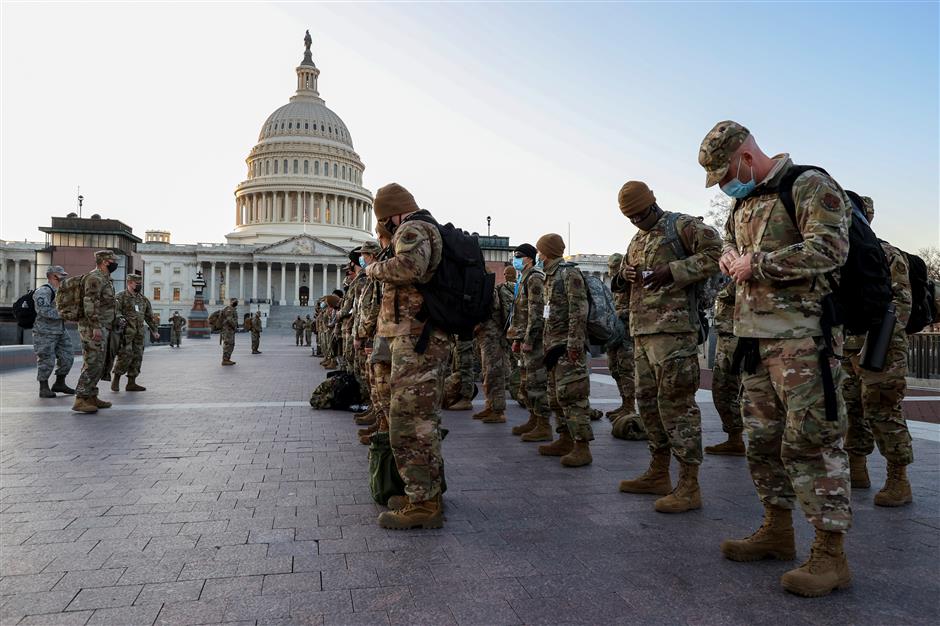 Members of the US National Guard arrive at the Capitol in Washington on Tuesday. The Pentagon is deploying up to 15,000 National Guard troops in a major change of posture amid fear of new violence ahead of President-elect Joe Biden’s inauguration on January 20, after mobs stormed the Capitol last week. The troops are armed.

US Vice President Mike Pence told leaders of House of Representatives on Tuesday he does not support invoking the 25th Amendment process to remove Donald Trump, all but guaranteeing an impeachment vote against the besieged president.

“With just eight days left in the President’s term, you and the Democratic Caucus are demanding that the Cabinet and I invoke the 25th Amendment,” Pence wrote to House Speaker Nancy Pelosi, referring to the process that would declare Trump unable to fulfill his duties and install Pence as acting president for the remainder of the term.

“I do not believe that such a course of action is in the best interest of our nation or consistent with our Constitution,” Pence said.

Democrats mobilized rapidly to begin the process to have Trump removed after he encouraged his supporters last Wednesday to “march” to the US Capitol and “fight.”

The vice president’s letter came just hours before the House was to vote on a resolution that calls on Pence to initiate the 25th Amendment process and “declare what is obvious to a horrified nation: that the President is unable to successfully discharge the duties and powers of his office.”

Pence told Pelosi that the House’s call for invoking the 25th Amendment was misplaced, saying it was designed to “address presidential incapacity or disability,” not as a “means of punishment or usurpation.”

Pence and Trump had their first conversation on Monday evening after days of silence following the riot and Trump’s public rebuke of Pence for not seeking to block the congressional certification of Biden’s Electoral College win.

Trump, who has sought unsuccessfully to overturn his election loss, had pressured Pence to intervene in the certification process, and some of Trump’s supporters in the assault discussed assassinating Pence for being a traitor.

Pence referenced the strains in his letter to Pelosi.

“Last week, I did not yield to pressure to exert power beyond my constitutional authority to determine the outcome of the election, and I will not now yield to efforts in the House of Representatives to play political games at a time so serious in the life of our nation,” he wrote.

US President Donald Trump, facing impeachment on a charge of “incitement of insurrection,” on Tuesday denied responsibility for his supporters’ violent invasion of the US Capitol last week and said his remarks before the siege were appropriate.

Trump told reporters that his speech before Wednesday’s assault in which he urged supporters to march on the Capitol and fight had been analyzed by unnamed others, who he said believed it was “totally appropriate.”

US chases sedition charges over riot

The United States has opened criminal investigations of more than 170 people who stormed the Capitol last week and plans to charge some of the most serious offenders with assault and seditious conspiracy for their role in the violence, a federal prosecutor said on Tuesday.

Acting Washington US Attorney Michael Sherwin said his office expects hundreds of people ultimately to be charged as the Federal Bureau of Investigation reviews more than 100,000 photos and videos of the unrest — some of which were taken by participants as they smashed windows and stole items.

“The scope and scale of this investigation and these cases are really unprecedented, not only in FBI history, but probably DOJ history,” Sherwin told a news conference. “The Capitol grounds outside and inside are ... a crime scene.”

Sherwin said 70 criminal cases have been filed, but he predicted that hundreds will come out of the probe.

While many of them involve people whose photos went viral on social media, such as one of a man pictured sitting at the desk of a staffer of House Speaker Nancy Pelosi, he said more serious charges are coming and a grand jury has been reviewing the cases.

“We’re looking at significant felony cases tied to sedition and conspiracy,” Sherwin said, noting his office has launched a strike force whose marching orders are to build criminal cases around such charges.

“The range of criminal conduct is really ... unmatched in any type of scenario that we’ve seen,” Sherwin said.