US far behind target on mass vaccination 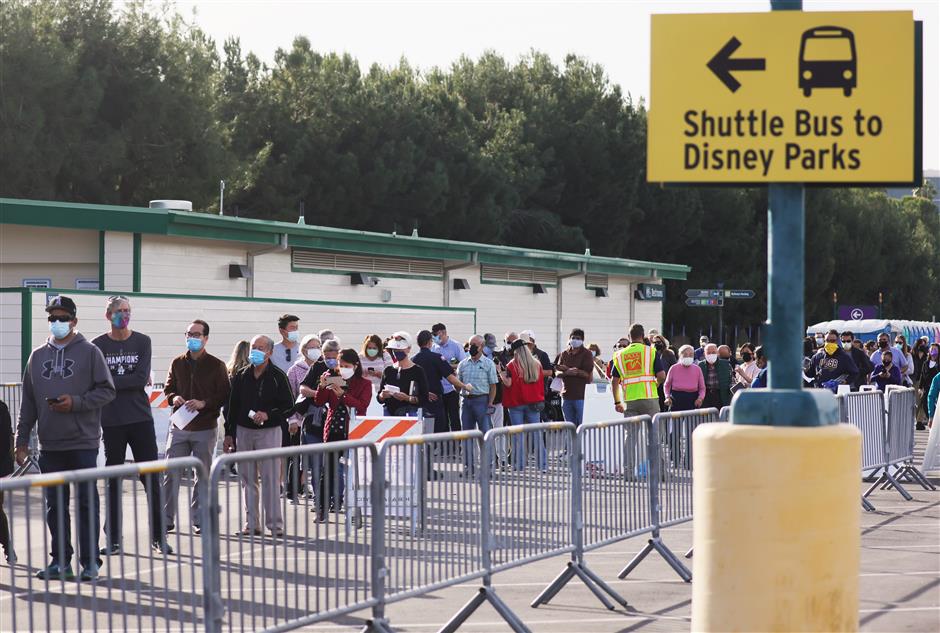 People wait in line to receive the COVID-19 vaccine at a mass vaccination site in a parking lot at the Disneyland Resort in Anaheim, California, on Wednesday.

More than 10 million people have received their first dose of a COVID-19 vaccine in the United States, official data showed on Wednesday, yet the country remains behind its immunization targets.

Of 29,380,125 doses of the Pfizer/BioNTech and Moderna vaccines sent to states, 10,278,462 have been administered as first doses, according to the CDC’s tracker.

That is around 3.1 percent of the total population of roughly 330 million people. Vaccines are not yet available to children.

The US has inoculated more people than any other Western country, but the rollout has fallen far behind goals set by authorities, who had hoped to reach 20 million people by the end of December.

As a percentage of population vaccinated, Israel is leading the world, followed by the United Arab Emirates, Bahrain and Britain, then the US.

As part of efforts to expand access to COVID-19 vaccines, the federal government said this week it would allow makers to release all their available doses instead of reserving booster shots.

This marks a break from the previous plan in which second doses were held back for those who had received their first, to ensure that there is no delay.

The Pfizer/BioNTech and Moderna vaccines require boosters after three and four weeks, respectively.

“States have been blamed for being initially overly prescriptive in how they distributed their supply, which led to doses lying unused in freezers or even being thrown away because they expired,” said Andrea Polonijo, a public health expert at the University of California, Riverside.

“Within states, there is also no standardized means of scheduling vaccination appointments, leaving many members of the public confused about when and where they can get vaccinated.”

The federal government has now also recommended that states start vaccinating everyone over 65, regardless of whether they have health conditions.

“We could run out of #COVID19 vaccines by the end of next week if we don’t get a major shipment IMMEDIATELY.”