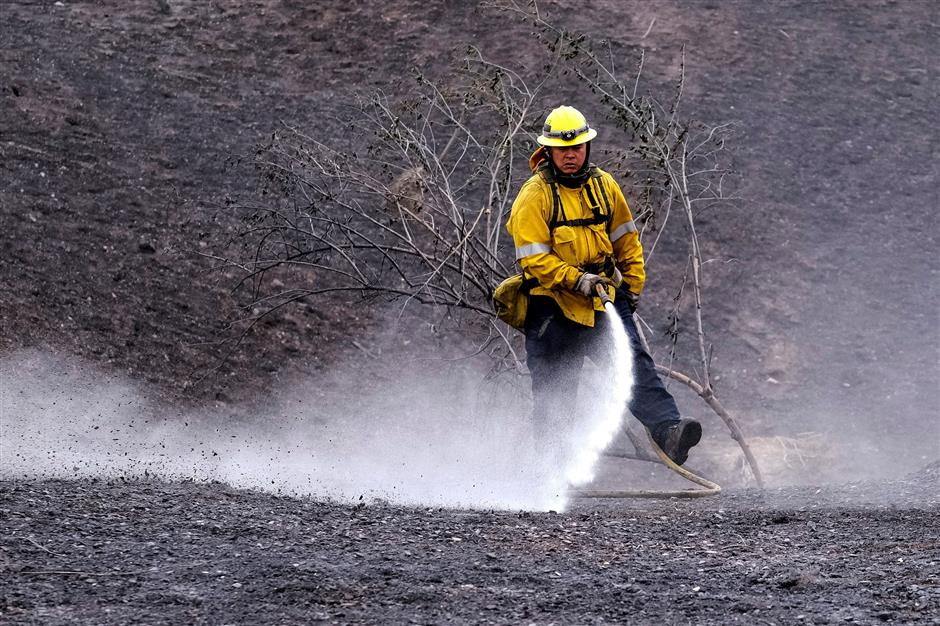 A firefighter works to douse hotspots while battling the wind driven Kellogg fire in San Dimas, California in the US on Tuesday.

Months-old embers from a deadly California fire were blown back to life on Tuesday by powerful winds that raked the state and prompted safety blackouts to tens of thousands of people.

Firefighters chased wind-driven blazes up and down the state, trees and trucks were toppled, Yosemite National Park was forced to close and two coronavirus vaccination centers were shut down.

South of San Francisco, the state’s firefighting agency said it responded to 13 vegetation fires in San Mateo and Santa Cruz counties in 12 hours, and isolated evacuations were ordered for a total of 120 homes near two of them.

The fires were small, with the largest no more than a few dozen acres, and by nightfall were “creeping” rather than racing, according to state fire website descriptions. Two were within the area burned by last year’s CZU Lightning Complex inferno.

“Fires within the CZU Lightning Complex burn area were regenerated by high winds,” the local unit of the California Department of Forestry and Fire Protection (Cal Fire) tweeted.

The Santa Cruz Mountains have a thick layer of “duff,” dead vegetation under heavy timber in which deep smoldering embers can be revived by the wind, said Cecile Juliette, a spokesperson of Cal Fire.

Small fires blazed throughout the state, though most were quickly stopped from spreading and posed no serious threat to homes. The largest, near Bakersfield in the San Joaquin Valley, burned about 2.77 square kilometers. In both the north and south, residents were blacked out by utilities to prevent downed or damaged power lines from sparking blazes.

Southern California Edison shut off power to more than 78,000 homes and businesses in seven counties and was considering blacking out well over a quarter-million more.

That was in addition to nearly 300,000 customers in the northern and central parts of the state that had lost power, company officials said.