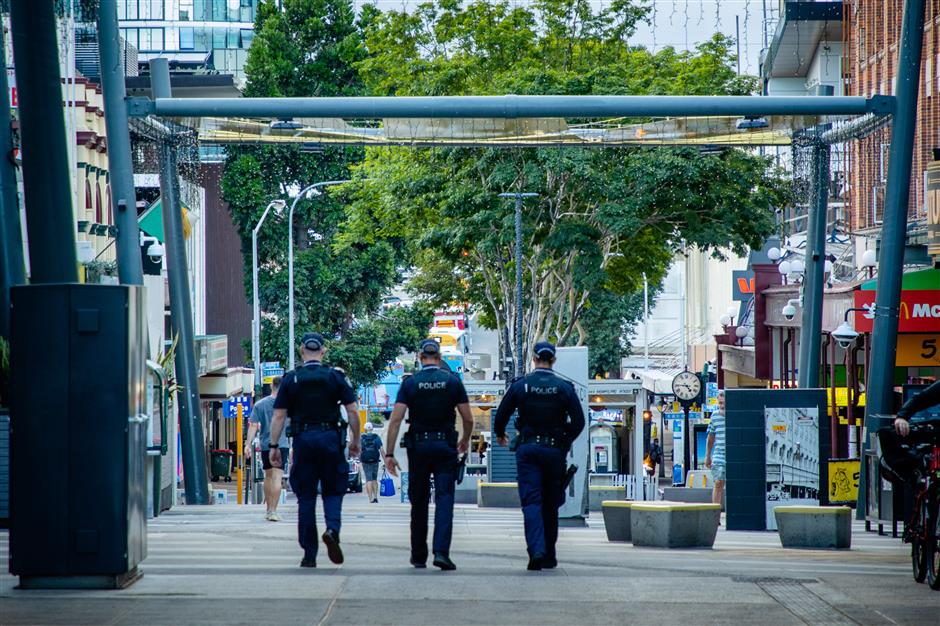 Police officers patrol the Valley Mall in Brisbane on March 29, 2021 as more than 2 million people in the city entered a three-day lockdown after a cluster of coronavirus cases was detected in Australia's third-biggest city.

The European Union has blocked shipments of 3.1 million doses of AstraZeneca’s COVID-19 vaccine to Australia and the country has little hope of getting the remaining 400,000 doses it has been pledged on time, an Australian government source said on Tuesday.

The export curb underscores massive shortfalls of the AstraZeneca shot across the bloc and complicates Australia’s inoculation campaign, which is already 83 percent behind its original schedule.

With inoculation rollouts running far behind those of Britain and the United States, the EU tightened its oversight of vaccine exports last month, giving it greater scope to block shipments to countries with higher inoculation rates.

“They’ve blocked 3.1 million shots so far,” said the Australian government source, adding Canberra had only received 300,000 doses and a further 400,000 doses were scheduled to arrive by the end of April.

“We haven’t given up hope but we’ve stopped counting them in our expected supplies,” the source said.

The person declined to be named because he is not authorized to talk about the matter.

Australia had until Tuesday only confirmed the block of 250,000 doses of AstraZeneca doses from the EU, which Canberra said then would not delay its inoculation timetable.

AstraZeneca did not immediately reply to a request for comment yesterday.

An EU spokesperson said it had rejected only one of a total of 491 COVID-19 vaccine export requests since it enhanced export transparency in late January, and seven requests were currently being reviewed.

She declined to say whether shipment requests to Australia were under review.

Australian Prime Minister Scott Morrison said yesterday the missing shipments were responsible for it not meeting its inoculation schedule.

“In early January, we anticipated we would have the 3.1 million vaccines. Those vaccines were not supplied to Australia,” Morrison told reporters in Canberra.

“That is the reason.”

The AstraZeneca vaccines arriving from Europe were to underpin the early stages of Australia’s vaccine drive, supplementing 50 million shots of the vaccine that will be locally produced.

But the latest supply blockages leave Australia struggling to step up the pace of its vaccination drive, which started much later than some other countries due to low case numbers.

Australia has recorded just 909 coronavirus deaths since the pandemic began and said yesterday it would launch a quarantine and COVID-testing free travel bubble with New Zealand this month after effectively eradicating the virus by closing borders last year.

Its vaccine program now running well behind schedule, with only about 670,000 people inoculated against an initial target of 4 million by end-March.

While the government blamed the slow rollout for supply issues from Europe, Australian state governments have also complained about slower-than-expected distribution and a lack of certainty on supplies.