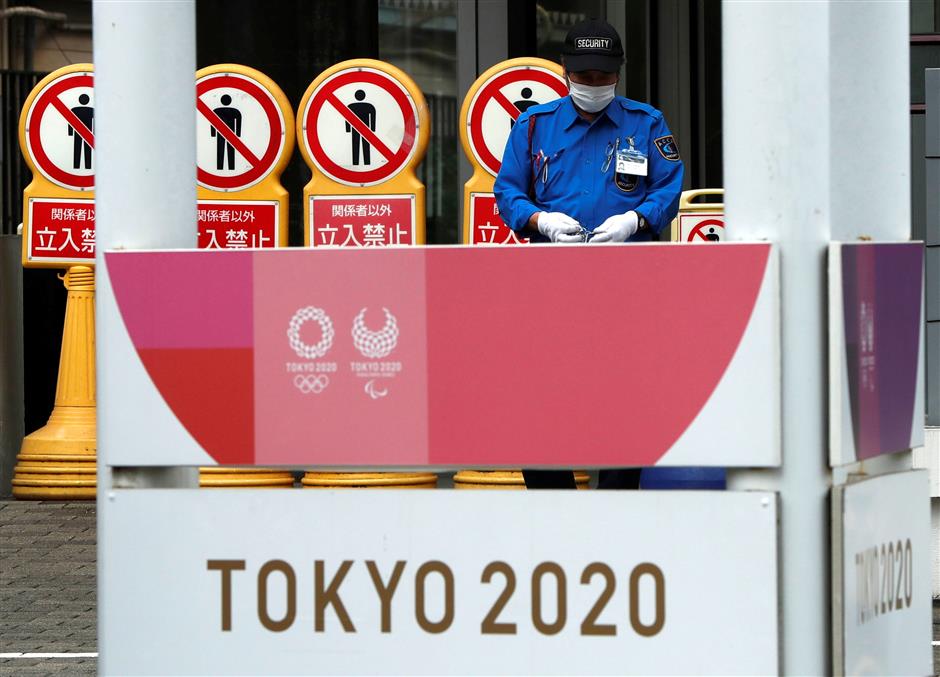 A security personnel and off-limits displays are seen near a banner for the Tokyo 2020 Olympics and Paralympics that have been postponed to 2021 due to coronavirus pandemic, outside an Olympic facility in Tokyo, Japan on Thursday.

Dozens of Japanese towns have abandoned plans to accept overseas athletes competing in the Olympics from July due to concerns about inadequate resources amid the fourth wave of coronavirus infections, the Nikkei newspaper reported on Thursday.

Of 528 towns registered to welcome international competitors, about 40 have decided not to accept athletes for training camps and cultural exchanges. The Nikkei reported citing a government source.

Ibaraki prefecture Governor Kazuhiko Ooigawa said on Wednesday he rejected the Tokyo Olympics Organising Committee’s request to secure hospital beds for athletes as the prefecture had to prioritize its citizens.

He has said a further postponement of the Games ­— originally due to be held last year – or outright cancellation should be considered if the pandemic worsened.

The United States’ track and field team has canceled its pre-Olympics training camp in Japan out of concerns for their safety during the pandemic, the eastern prefecture of Chiba said on Wednesday.

Overseas athletes also will not participate in a test event for the Olympics BMX freestyle cycling, the Yomiuri newspaper said yesterday. The test event had been postponed from April to May 17.

The International Olympic Committee on Wednesday said it supported Japanese measures to counter COVID-19 and was confident the Tokyo Olympics would be an “historic” event.

Japan and the government have also repeatedly vowed to hold the Games as scheduled from July 23 to August 8, despite rampant criticism.

Public opposition to the Games is growing as the country struggles to contain a fourth wave of infections which is pushing medical resources to the brink.

Japan reported more than 7,000 new infections on Wednesday, with 969 in Games host-city Tokyo.

The government has been criticized for not locking down the economy hard enough and bungling the vaccine rollout, with only 2.8 percent of the population inoculated, the lowest rate among wealthy countries.

To forestall a virus outbreak during the event, Japan is preparing to offer vaccinations to about 2,500 Olympic and Paralympic athletes and support staff.