The death toll from flooding in Western Europe climbed above 180 yesterday after rescue workers dug deeper into debris left by receding waters. Heavy rain fueled new floods in southeastern Germany and Austria, though not on the scale of last week's devastating onslaught.

Police put the toll from the hard-hit Ahrweiler area of western Germany's Rhineland-Palatinate state at more than 110 and said they feared the number may still rise. In neighboring North Rhine-Westphalia state, Germany's most populous, 46 people were confirmed dead, including four firefighters. Belgium has confirmed 27 casualties.

Chancellor Angela Merkel arrived on Sunday in Schuld, a village located on a curve of the Ahr river that was devastated by the flooding, to see the damage for herself. Her visit comes after Germany's president went to the area on Saturday and made clear that it will need long-term support.

Finance Minister Olaf Scholz said he will propose a package of immediate aid at a Cabinet meeting on Wednesday, telling the Bild am Sonntag newspaper that more than 300 million euros (US$354 million) will be needed. And he said that officials must start setting up a rebuilding program which, from experience with previous flooding, will be in the billions of euros. 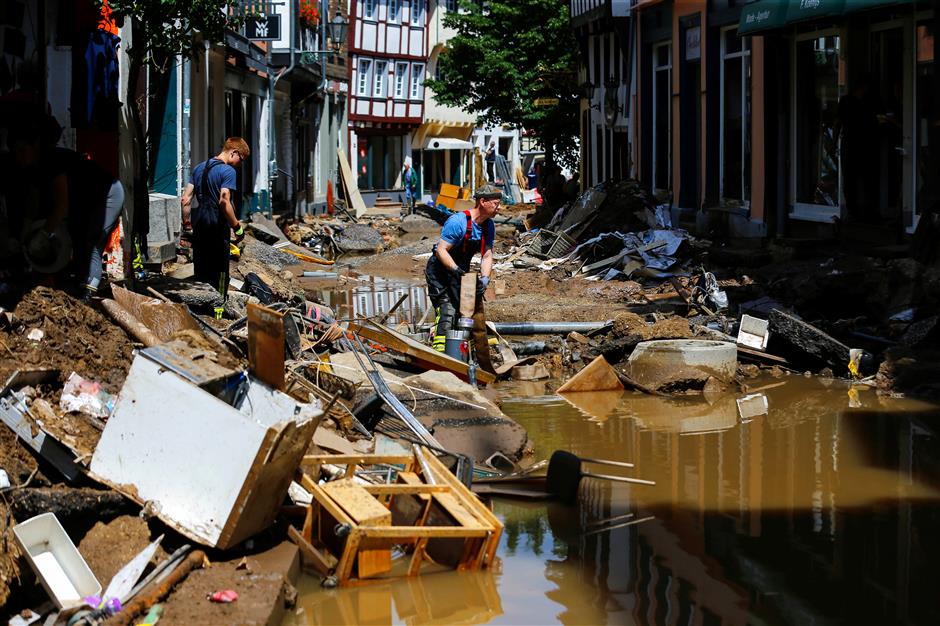 Firefighters work in an area affected by floods caused by heavy rainfalls in the center of Bad Muenstereifel, Germany, on Sunday.

Although rain has stopped in the worst-affected areas of Germany, Belgium and the Netherlands, storms and downpours have persisted in other parts of western and central Europe. There was flooding on Saturday night in the German-Czech border area, across the country from where last week's floods hit, and in Germany's southeastern corner and over the border in Austria.

A flash flood swept through the nearby Austrian town of Hallein late on Saturday, but there were no reports of casualties. Further west, parts of the town of Kufstein were flooded. Heavy rain and storms caused serious damage in several parts of Austria.

In Belgium, which will hold a national day of mourning tomorrow, water levels were falling on Sunday and the clean-up operation was under way.

The military was sent in to the eastern town of Pepinster, where a dozen buildings have collapsed, to search for any further victims.

Tens of thousands of people are without electricity and Belgian authorities said the supply of clean drinking water was also a big concern.

Emergency services officials in the Netherlands said the situation had somewhat stabilized in the southern part of Limburg Province, where tens of thousands were evacuated, although the northern part was still on high alert.

Climate scientists say the link between extreme weather and global warming is unmistakable and the urgency to do something about climate change undeniable.

Scientists can't yet say for sure whether climate change caused the flooding, but they insist that it certainly exacerbates the extreme weather that has been on show around the world.