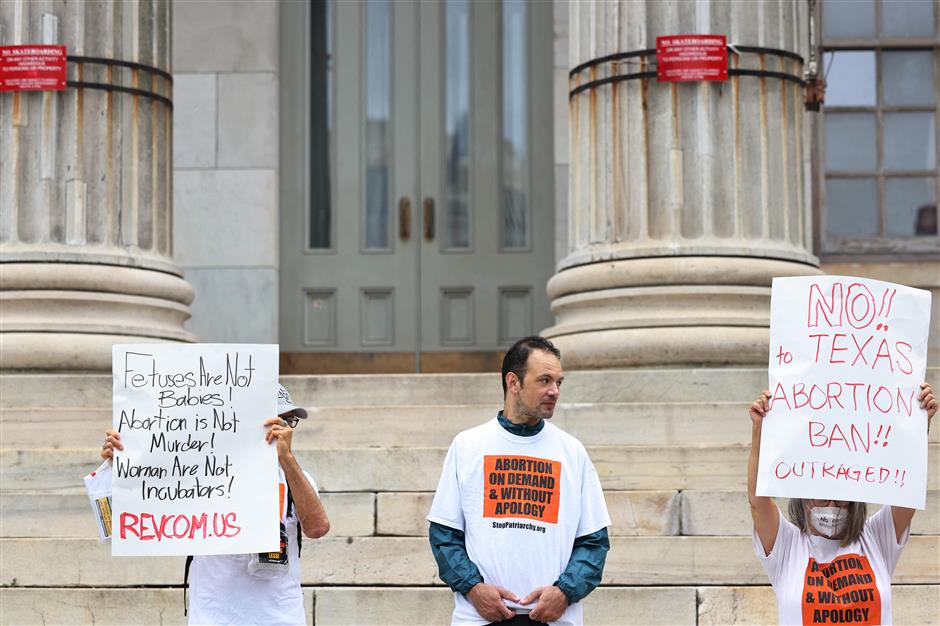 People gather for a reproductive rights rally at Brooklyn Borough Hall on September 1, 2021, in Downtown Brooklyn in New York City.

A new law that effectively bans most abortions went into force in the southern US state of Texas on Wednesday, as the conservative-leaning Supreme Court failed to respond to an emergency request to block it.

President Joe Biden vowed to defend abortion rights after the law known as the "Texas Heartbeat Act," the most restrictive abortion legislation in the country, took effect.

The bill bans abortions after six weeks – before many women even know they are pregnant – and makes no exceptions for rape or incest.

"This extreme Texas law blatantly violates the constitutional right established under Roe v. Wade and upheld as precedent for nearly half a century," Biden said in a reference to the landmark 1973 Supreme Court case that legally enshrined a woman's right to an abortion.

"Outrageously, it deputizes private citizens to bring lawsuits against anyone who they believe has helped another person get an abortion," the Democratic president said.

"My administration is deeply committed to the constitutional right established in Roe v. Wade nearly five decades ago and will protect and defend that right."

Senate Bill 8, or SB8, signed in May by Texas Governor Greg Abbott, a Republican, bans abortion once a fetal heartbeat can be detected, which is usually in the sixth week of pregnancy.

While similar laws have passed in a dozen Republican-led conservative states, all had been stymied in the courts.

The American Civil Liberties Union, Planned Parenthood, the Center for Reproductive Rights and other groups filed an emergency request with the Supreme Court on Monday asking it to stop the Texas law from taking effect.

The court declined to rule by midnight September 1 – although it may still eventually grant the request from rights groups and abortion providers to block the Texas law.

"We have to tell them that Texas politicians are taking away their right to make the decision" about terminating a pregnancy, Rodriguez said.

Amy Hagstrom Miller, chief executive of Whole Woman's Health, said a clinic in Fort Worth, Texas, had performed abortions until 11:56pm on Tuesday.

"Our waiting room was filled with patients," she said.

Nancy Pelosi, the Democratic speaker of the House of Representatives, said the failure of the court to act has "delivered catastrophe to women in Texas."

The ACLU said the impact of the bill will be "immediate and devastating."

"Access to almost all abortion has just been cut off for millions of people," the powerful civil rights association said.

"This abortion ban is blatantly unconstitutional," it added.

"We won't stop fighting until it's blocked."

According to the ACLU, "approximately 85 to 90 percent" of the women who obtain an abortion in Texas are at least six weeks into pregnancy.

Anti-abortion activists, however, were jubilant: "This is an historic moment in the fight to protect women and children from abortion," said Marjorie Dannenfelser, president of the anti-abortion nonprofit Susan B Anthony List.

The other states that have sought to enact restrictions on abortion in the early stages of pregnancy have been barred from doing so by rulings that cited protections granted in Roe v. Wade.

That decision guaranteed the right to an abortion in the US so long as the fetus is not viable outside the womb, which is usually the case until the 22nd to 24th week of pregnancy.

Texas' law is different from those of other states because it allows the public – rather than state officials such as prosecutors or health departments – to bring private civil suits to enforce the ban.

Everyday citizens are encouraged to report doctors who perform abortions or anyone who helped facilitate the procedure.

The Texas law "creates a bounty hunting scheme that encourages the general public to bring costly and harassing lawsuits against anyone who they believe has violated the ban," the ACLU said.

"Anyone who successfully sues a health center worker, an abortion provider, or any person who helps someone access an abortion after six weeks will be rewarded with at least US$10,000, to be paid by the person sued," it said.

Nancy Northup, president of the Center for Reproductive Rights, said the Texas bill would force women to "travel out of state – in the middle of a pandemic – to receive constitutionally guaranteed health care."

For procedural reasons, this system makes it more difficult for federal courts to intervene, and they have so far refused to hear appeals against the Texas law.

The US Supreme Court's failure to intervene is an unusual move, one that sends a "powerful message," Florida State University law professor Mary Ziegler wrote on SCOTUSblog.

"The court's silence seems to mark a fundamental break with the respect the justices have long shown those on either side of the abortion issue," she said. "Saying nothing suggests that there was no emergency."

The Supreme Court is due to hear a case in the coming months involving a Mississippi law that prohibits abortions after the 15th week of pregnancy, except in cases of medical emergency or a severe fetal abnormality.

It will be the first abortion case considered by the nation's high court since former President Donald Trump cemented a conservative-leaning 6-3 majority on the nine-member panel.

In an NBC News poll published on Wednesday, 54 percent of the Americans surveyed said abortion should be legal in all or most cases, while 42 percent said it should be illegal.