Flooding in NY due to Hurricane Ida kills 8

The remnants of Hurricane Ida dumped historic rain over New York City, with at least nine deaths linked to flooding in the region as basement apartments suddenly filled with water and freeways and boulevards turned into rivers, submerging cars.

Water poured into subway tunnels and cars as catastrophic flooding, which scientists have warned likely will be more common with global warming, came to America's largest city.

At least nine deaths were reported in New York City and New Jersey. A New York City police spokesperson says a total of eight people died when they became trapped in flooded basements.

The rain ended by daybreak on Thursday as rescuers searched for more stranded people and braced for potentially finding more bodies. 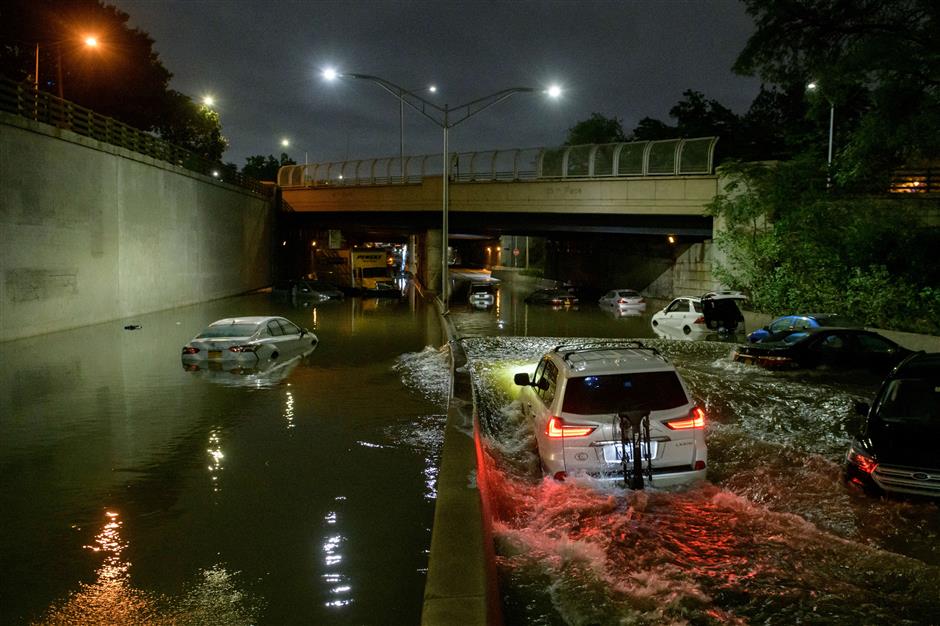 Vehicles wade through floodwaters on an expressway in Brooklyn, New York, early Thursday as remnants of Hurricane Ida swept through the area.

The National Weather Service office in New York issued its first-ever set of flash flood emergencies in the region on Wednesday night, alerts only sent in the most dangerous conditions.

The agency recorded 8.91 centimeters of rain in New York's Central Park in one hour on Wednesday, far surpassing the 4.92cm that fell in one hour during Tropical Storm Henri on the night of August 21, which was believed at the time to be the most ever recorded in the park.

Subway stations and tracks became so flooded that the Metropolitan Transportation Authority suspended all service. Hundreds of flights were canceled at LaGuardia and JFK airports, as well as at Newark, where video showed a terminal inundated by rainwater.

The toll Ida has taken in the US also included at least two tornadoes in the mid-Atlantic where homes were now rubble in Mullica Hill, New Jersey. Police in Connecticut are investigating a report of a person missing due to the flooding in Woodbury.

At least one death was reported in New Jersey. Passaic Mayor Hector Lora said a 70-year-old man was swept away and authorities were trying to confirm at least one other death in the city.