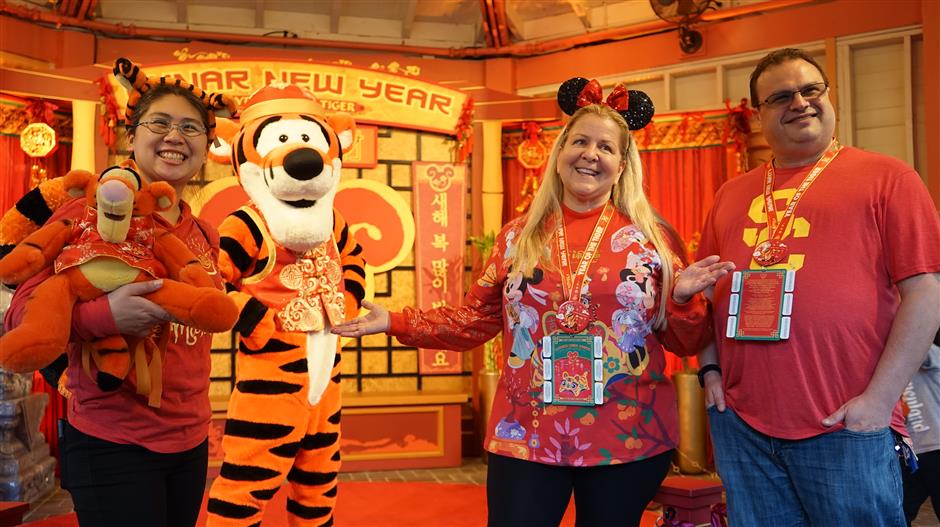 Visitors from around the world joined the special celebrations which run from January 21 through February 13, immersed in a festival atmosphere and sharing wishes for good health, luck and prosperity throughout the year ahead.

The 2022 Chinese Lunar New Year falls on February 1. It is based on a 12-year Zodiac cycle of characters, with 2022 being the Year of the Tiger.

The colorful Chinese Lunar New Year theme has turned the park into a sea of red and gold – the Chinese New Year's traditional colors – and a wonderland of festive Asian holiday cheer.

Decorated in red and gold to symbolize good fortune and happiness, the float features bright bunches of red firecrackers that hang together with golden tassels, and delicate red and gold lanterns come aglow for after-sunset performances.

During the procession, Mulan and her wisecracking dragon friend Mushu were surrounded by performers bringing cultural artistry and dance to life.

Disney characters, including Tigger, Mulan and Mushu, Mickey and Minnie, and the Three Little Pigs, all dressed in Chinese festive attire, and greeted visitors.

They are also invited to try Chinese arts and crafts, such as Chinese calligraphy, and dragon's pearl coloring craft.

"I love Chinese culture, and I like the different ways to celebrate it," said Mitchell, who has experienced Disney's Chinese Lunar New Year celebrations for several times.

Alexa Garcia, a Disneyland Resort spokesperson, told Xinhua the Lunar New Year celebrations have been a "fan favor" for a few years, showing diversified cultures and offering a lot of fun things for visitors to do, to see, and to taste.

People love to experience and engage in Chinese culture in different ways, she said.