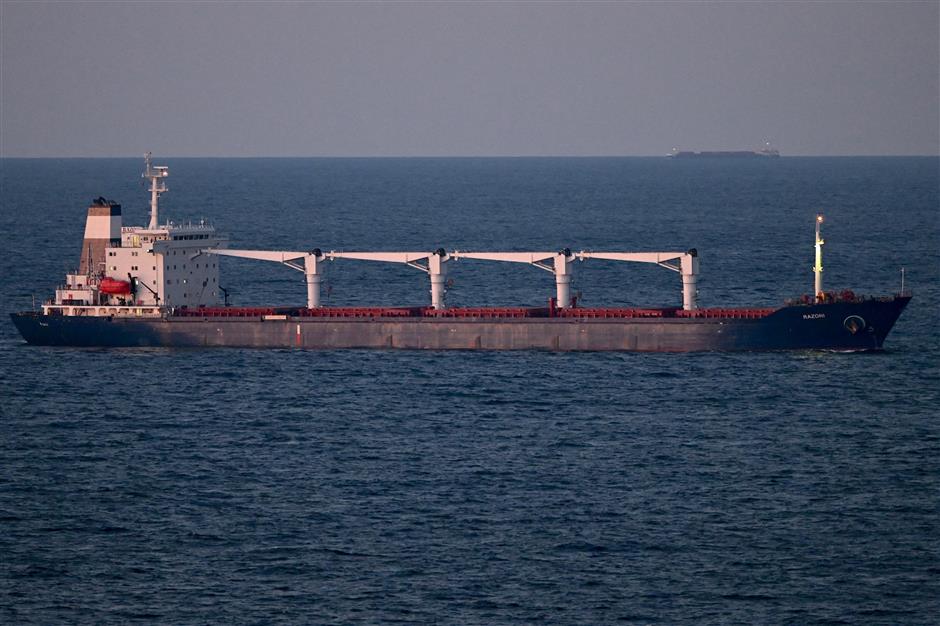 The first grain-laden cargo ship leaving the Ukrainian port under a UN-brokered deal anchors off Istanbul on the Black Sea on Tuesday, waiting to be inspected by the Joint Coordination Center (JCC) before it resumes the voyage to Lebanon.

The Turkish Defence Ministry tweeted that the Sierra Leone-flagged ship Razoni, which left Odesa early on Monday with 26,527 tons of corn, has reached the Black Sea entrance of the Bosphorus Strait and anchored at an assigned point.

The ship will receive an inspection by representatives from the JCC at 10am local time (7am GMT) on Wednesday.

The ministry is organizing a special program at a location on the shore with a perfect view of the site to enable press members to cover the delegation's boarding the ship.

Once cleared, it will pass through the strait, sailing toward the Mediterranean as planned, and the JCC will closely monitor the vessel until it arrives at the destination.

"The route and the humanitarian corridor that the ship follows, possible needs, and the details and preparations regarding its inspection are carried out in line with the procedures and principles agreed at the center," Turkish Rear Admiral Ozcan Altunbulak told reporters at the center on Tuesday.

He also said currently, the preparations of the other ships that will carry grain and other foodstuffs from the three ports of Ukraine are continuing.

The JCC was inaugurated in Istanbul last week. It has a total of 20 representatives from Ukraine, Russia, the United Nations and Türkiye to monitor the implementation of the grain shipment process.

On July 22, Russia and Ukraine signed a deal with Türkiye and the United Nations to allow food and fertilizer exports from the Ukrainian ports in the Black Sea, namely Odesa, Chornomorsk, and Pivdennyi.