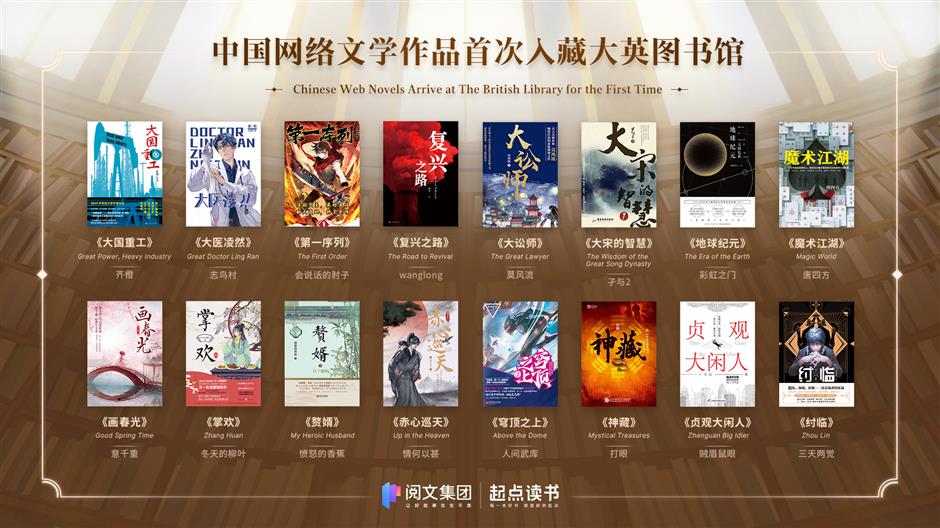 A batch of 16 Chinese web novels, which were originally serialized on a Shanghai-based literature website, have entered a collection in the British Library.

A batch of 16 Chinese web novels, which were originally serialized on a Shanghai-based literature website, have entered a collection in the British Library, Shanghai Daily learned on Wednesday.

It was the first time for Chinese web novels to be available in the British Library, which selects collections based on reader requirements and the value of items.

"The inclusion of the 16 works demonstrates that online literature has become an important contemporary cultural phenomenon," said China Literature, the Shanghai-based firm.

More information about the 16 novels can be found on the British Library's website. Readers can borrow the printed versions in the library.

The 16 works, include "My Heroic Husband," "Great Power, Heavy Industry" and "The First Order." They cover 20 years of classic web novels, from early days to the present, across the genres of sci-fi, historical fiction, realistic fiction and fantasy.

Among them, "My Heroic Husband" has been adapted into a best-selling TV series, which has been viewed several hundred million times.

Qi Cheng, the author of "Great Power, Heavy Industry," was glad to hear the news, as "this means our work can influence overseas readers, helping them understand China."

The HK-listed China Literature, China's top online reading platform, has licensed over 800 works of literature to overseas publishers for digital and physical publication. Its international version – WebNovel – has been visited over 100 million times so far.

With a history of 250 years, the British Library's collections include the original manuscript version of "Alice's Adventure in Wonderland," the original manuscripts of Mozart's musical scores, and copies of the First Folio of Shakespeare, as well as over 450 Chinese oracle bones dating back to the Shang Dynasty (1600-1046 BC).