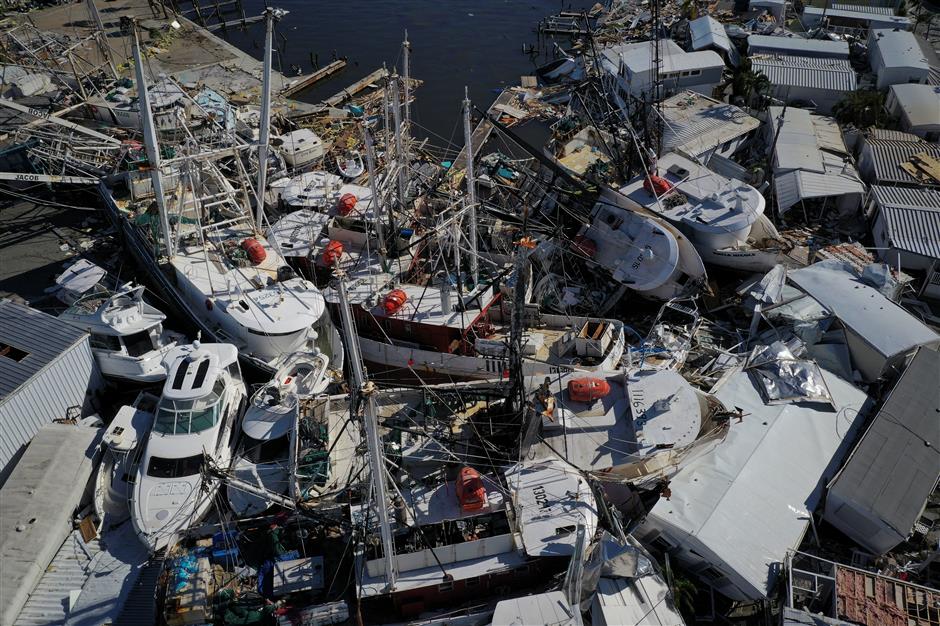 In this aerial view, boats sit atop one another in a marina near Fort Myers Beach on September 29, 2022, in San Carlos Island, Florida.

Ian has caused significant damage to Florida, the southeasternmost US state, and a hurricane warning was issued for the entire coast of South Carolina on Thursday.

The US National Hurricane Center (NHC) said in its latest advisery issued on late Thursday morning that Ian is now a tropical storm with maximum sustained winds of 110 kilometers per hour, which is moving north-northeast at 15 kilometers per hour.

The storm, which made landfall in southwest Florida as Category 4 hurricane on Wednesday afternoon, is forecast to regain hurricane strength on Thursday evening and make landfall in South Carolina on Friday.

Coastal areas from Savannah River to Little River Inlet in South Carolina are under the hurricane warning.

The alert means that hurricane conditions are expected somewhere within the warning area. Preparations to protect life and property should be rushed to completion.

"Major-to-record river flooding" will continue across central Florida through next week, according to the NHC advisery.

"The amount of water that's been rising and will likely continue to rise today, even as the storm is passing, is basically a 500-year flood event," Florida Governor Ron DeSantis told reporters on Thursday morning.

DeSantis added the damage caused by the storm to Florida will likely take years to repair.

The Sanibel Causeway, which connects Sanibel Island to Florida's mainland, has been damaged with portions washed away by storm surges.

One fatality related to Ian has been reported in Osceola County, Florida.

As of Thursday noon, more than 2.6 million customers are without power in Florida due to the impact of the destructive storm, according to PowerOutage.us.

US President Joe Biden spoke with DeSantis on Thursday morning about the federal assistance to the state in response to Ian, according to the White House.

Biden declared a major disaster exists in Florida earlier in the day and he and DeSantis committed to continued close coordination.