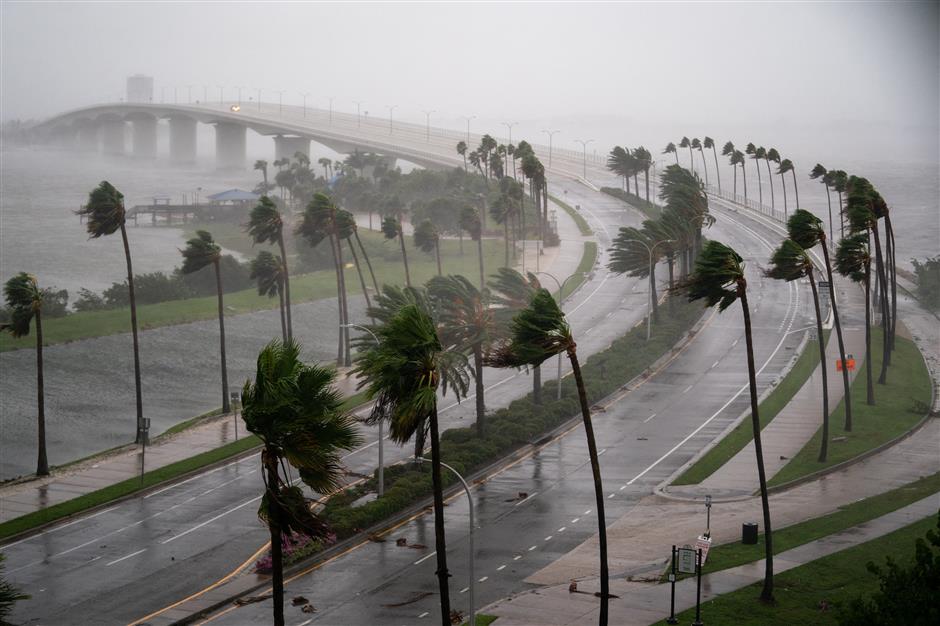 Wind gusts blow across Sarasota Bay as Hurricane Ian churns to the south on September 28, 2022, in Sarasota, Florida.

"Extremely dangerous" Ian made landfall as a Category 4 hurricane in southwestern Florida, the southeasternmost US state, on Wednesday afternoon, according to the National Hurricane Center.

Catastrophic storm surge inundation of 12 to 18 feet (approximately 3.66 to 5.49 meters) above the ground level is expected somewhere between Englewood to Bonita Beach, including Charlotte Harbor, forecasters said.

Weakening is expected after landfall, but Ian could be near hurricane strength when it moves over Florida's east coast on Thursday, and when it approaches the northeastern Florida, Georgia, and South Carolina coasts late Friday.

As of Wednesday afternoon, more than 814,000 customers are without power in Florida due to the storm, according to PowerOutage.us.

Florida Governor Ron DeSantis said Wednesday morning that Ian was expected to be a "historic" storm with "a profound impact" on the state.

Fleets of highwater vehicles, 42,000 linemen, 7,000 members of the National Guards, and 179 aircraft had been mobilized in response to the hurricane's impact, DeSantis tweeted.

US President Joe Biden said from the White House on Wednesday that the federal government was "on alert and in action" as the storm was closing in on Florida.

"This storm is incredibly dangerous, to state the obvious. It's life-threatening," Biden warned.

"You should obey all warnings and directions from emergency officials," he continued. "Don't take anything for granted. Use their judgment, not yours. Evacuate when ordered. Be prepared."

The US Coast Guard is searching for the 23 migrants whose vessel sank off the coast of Florida amid Hurricane Ian, an official said on Wednesday afternoon.

Slosar said that four "Cuban migrants swam to shore after their vessel sank due to inclement weather" and that a search and rescue operation was underway for 23 individuals believed to have been on the same boat.