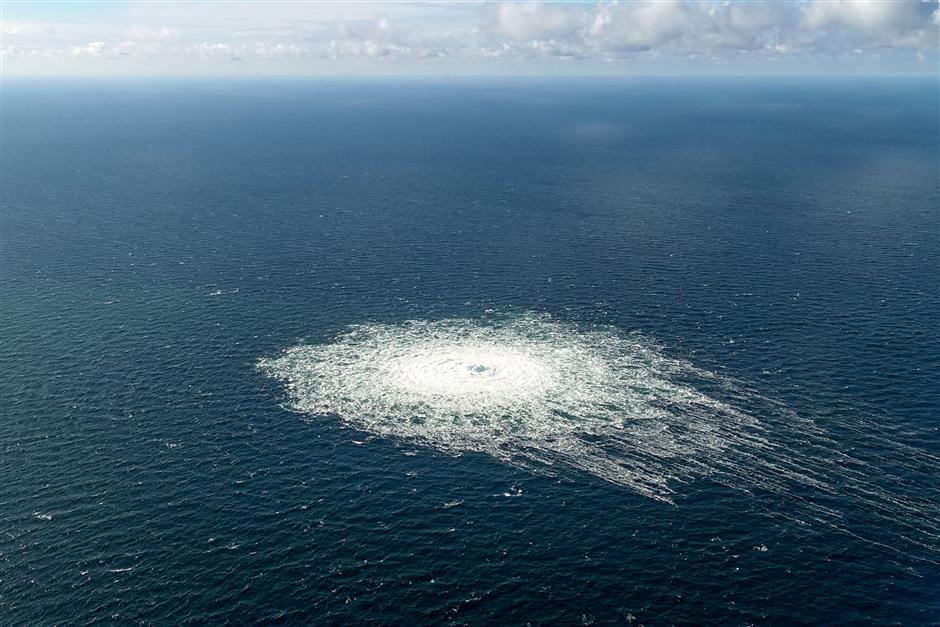 This handout picture released on September 27, 2022 by the Danish Defence Command shows the gas leak at the Nord Stream 2 gas pipeline as it is seen from the Danish Defence's F-16 rejection response off the Danish Baltic island of Bornholm, south of Dueodde.

"It is the clear assessment by authorities that these are deliberate actions. It was not an accident," Frederiksen told journalists.

On Monday, Danish and Swedish officials said that leaks had been identified in two natural gas pipelines – Nord Stream 1 and its twin, Nord Stream 2 – under the Baltic Sea off the coast of Denmark's Bornholm island, near the exclusive economic zones of Denmark and Sweden.

Frederiksen said that "two explosions" have been registered, but she refused to speculate as to who might be responsible.

Dan Jorgensen, minister for climate, energy and utilities, said that "The gas pipes lie at a depth of 70 to 90 meters and consist of over 12-centimeter thick layers of steel and concrete, respectively. The nature of the leaks indicates that there are such large holes that it cannot have happened by accident."

He said that the leaks are not expected to cause supply security issues in the short term.

Citing Denmark's foreign intelligence service, Defense Minister Morten Bodskov said that it did not see any increased military threat against Denmark after the leaks.

"I would like to emphasize that the defense intelligence service does not consider that there is an increased military threat to Denmark," Defense Minister Morten Bodskov said.

He added that no advance warnings had been received, but that there had been an increase in tensions around the Baltic Sea.

"This is a serious matter. The defense is increasing its presence around Bornholm," he said.