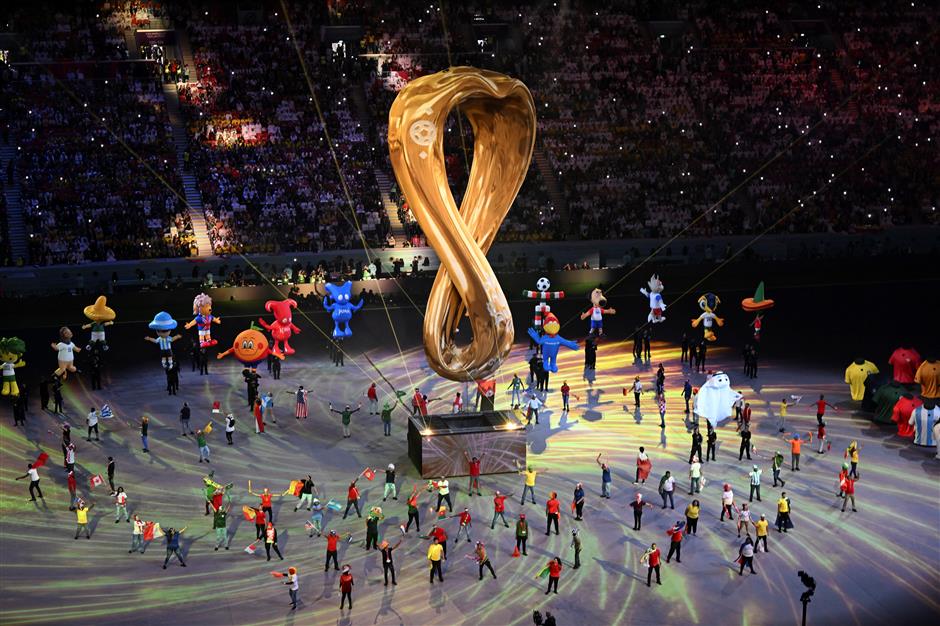 The opening ceremony of the FIFA World Cup in Doha, Qatar.

With more than 60,000 fans observing from the stands and hundreds of millions more watching on television, Qatar showed the world its ability to stage an unforgettable FIFA World Cup.

"This opening (ceremony) is different from previous World Cups. It's amazing!" said Adam Wolford, a 48-year-old US fan who had traveled to Qatar from Los Angeles to watch 13 of the tournament's 64 matches.

"The organization is way better than what I had expected," he added.

In the main event that followed, Enner Valencia scored a first-half brace as Ecuador overcame Qatar 2-0 at the Al Bayt Stadium, around 50 kilometers north of Doha.

"We competed well, but it's a World Cup, and we were playing in it for the first time," Qatar manager Felix Sanchez said after the match. "We can improve a lot, and we know we haven't shown our maximum level."

On and off the pitch, Qataris have every reason to be proud. Brand-new infrastructure - seven state-of-the-art stadiums that have been built from scratch and one that has been almost completely refurbished - is testament to the country's organizational capacity and commitment to staging a spectacular World Cup for the ages.

"We have worked hard, along with many people, to make it one of the most successful tournaments," Emir Sheikh Tamim bin Hamad Al Thani said during the opening ceremony. "We have exerted all efforts and invested for the good of all humanity."

The emir was seated between FIFA president Gianni Infantino and his father, Sheikh Hamad bin Khalifa Al Thani, who secured the World Cup for the Gulf nation 12 years ago.

"How beautiful it is for people to put aside what divides them in order to celebrate their diversity and what brings them together at the same time," Tamim said, with his words translated into English on a video screen inside the stadium.

"I wish all the participating teams a magnificent football performance, high sportsmanship, and a time full of joy, excitement and delight for you all," he continued. "And let there be days that are inspiring with goodness and hope."

On Saturday, Infantino spoke for many when he lamented "western hypocrisy" in response to questions about Qatar's human rights record.

"We have been told many, many lessons from some Europeans, from the western world," Infantino told reporters. "I think for what we Europeans have been doing the last 3,000 years we should be apologizing for the next 3,000 years before starting to give moral lessons to people."

Chinese elements and contributions can be seen everywhere in Qatar - from stadiums to telecommunications and even electric power plants.

The Lusail Stadium, which will host the World Cup final and closing ceremony, was built by China Railway Construction.

There are also solar photovoltaic power stations built by Power China, which are providing round-the-clock green energy to Qatar's population and the hundreds of thousands of visitors the country will receive during the World Cup.

There are myriad other products and services provided by Chinese companies that can be seen here on a daily basis by locals and visitors alike.

This is a symbol of China's development but also recognition that "China made and China built" is a doctrine that has been embraced and appreciated by people all over the world.

Leading Chinese engineer Li Bai said: "The construction of the Lusail Stadium marked the first time that a Chinese company participated as a main contractor to design and build a professional football venue under the highest FIFA standards.

"It was also the first time that a Chinese company carried out the design and construction work for a World Cup stadium," he added.

In 2020, Yutong was selected in a competitive bidding process to provide vehicles for this World Cup. In addition to subsequent orders, Qatar imported 1,500 buses from China, including 888 battery-run electric buses, which are transporting fans, FIFA officials and media to stadiums.

"That is to say that China's new energy technology has been recognized by the world," said Gan Shaoying, head of Yutong's Qatar service team.

Zhou Jian, Chinese Ambassador to Qatar, said China has made an impact on the world of football even if its team didn't qualify for the game's showpiece event.

"I feel so honored as China is able to make contributions to the World Cup," he said.