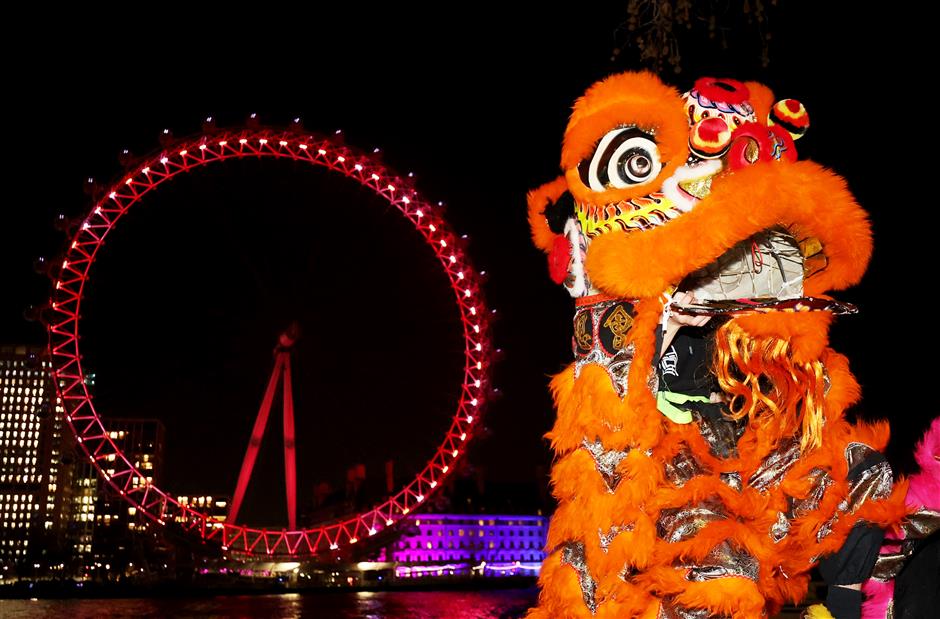 London Eye is illuminated in red to celebrate the Chinese New Year on January 13, 2023.

Landmarks around the globe have been lit up in the auspicious color red to celebrate the Lunar New Year, or Spring Festival, that fell on Sunday this year.

The Lunar New Year for 2023 marks the Year of the Rabbit – a gentle and beloved animal that signifies vitality, wittiness, cautiousness and good luck in the Chinese zodiac.

Outside China, many people are also celebrating the most important Chinese festival alongside local Chinese communities, enjoying a taste of Chinese culture while strengthening their friendship with others from different cultural backgrounds.

From the Empire State Building in New York, Tokyo Tower in Japan's capital, Sydney Opera House and many other famous landmarks to Chinatowns around the world, numerous buildings and neighborhoods have been lit up in red or decorated with Chinese elements such as red lanterns, creating a cheerful festival ambience.

A number of landmarks projected Spring Festival wishes in the Chinese language when turning red. On Saturday, Nelson's Column at London's Trafalgar Square was illuminated in Mandarin to wish people a Happy Chinese New Year. The Chinese character "fu," which means good fortune, was projected onto the Mole Antonelliana, the most recognizable building in Turin, Italy.

"We are so pleased to extend our heartfelt New Year's wishes to the entire Chinese community here in the United States, around the world and especially in China," said Tony Malkin, CEO, president and chairman of Empire State Realty Trust.

Apart from the lighting, some popular attractions and main streets in Sydney are seeing rabbit-shaped artworks designed by local illustrators in celebration of the festival.

Between mid-January and mid-February, a Chinatown on Yaowarat Road in Thailand's Bangkok is decorated with lights, featuring a 45-meter-long light tunnel and lanterns of various styles.

Also in a festive mood is the north Italian city of Milan. On Saturday, a Chinese New Year animation was played on a large screen in Piazza San Babila, a busy area in the city center. Along a bustling street there decorated with red lanterns and Chinese dragons, many locals came to experience Chinese culture and take photos.

To mark the Year of the Rabbit, Jungfrau, a popular ski region in Switzerland, also put up Chinese lanterns and custom-made illuminations at its Grindelwald Terminal to create a festive atmosphere. 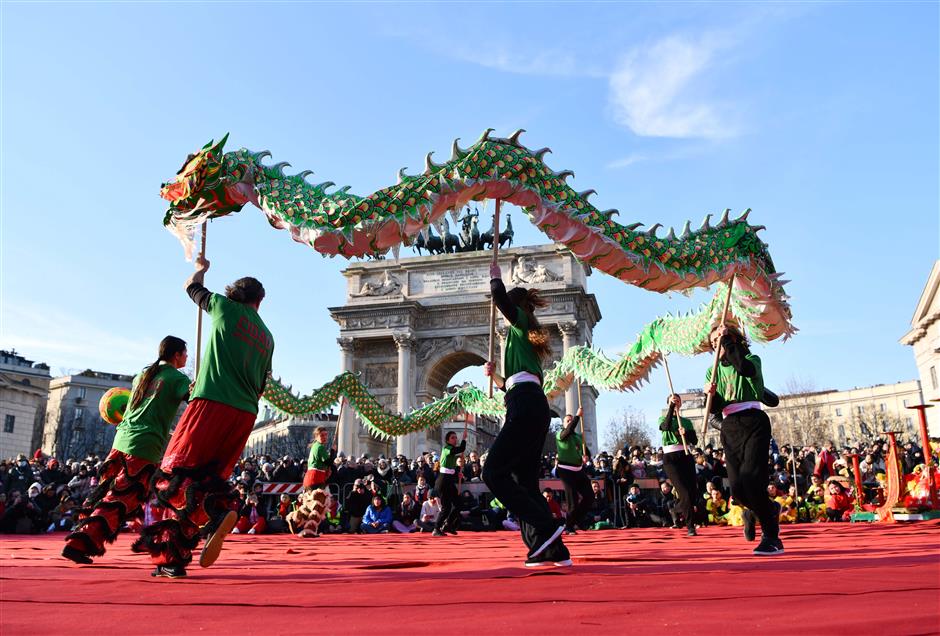 Various entertaining and cultural events such as concerts and food events have been organized in Cambodia, Ethiopia, New Zealand, Spain, the United States and others. For many countries, dragon parades, fireworks and issuing zodiac stamps have become symbolic activities during the Spring Festival.

On January 14, the French postal service La Poste held a ceremony in Paris to launch two rabbit-themed stamps. At the event, a French man who didn't offer his name said, "I've collected stamps for more than 60 years. Every year, I would come for the stamps dedicated to the Chinese New Year."

At Disney California Adventure Park, a series of celebrations kicked off Friday. The same day, the Empire State Building unveiled its Fifth Avenue Window Exhibition, which features an installation of artistic imagery and representations of rabbits.

As the Spring Festival brings nostalgic joy for overseas Chinese, Chinese diplomatic missions, businesses and cultural institutions based overseas have held receptions and galas to observe the New Year with their local colleagues.

Having attended a celebration at the Chinese Embassy in Iran earlier this month, Wang Danyu, a teacher at the Confucius Institute of Tehran University, said, "This event conveyed the warmth from my motherland."

Praising a festive event co-hosted by the Chinese Mission to the African Union and the UN Economic Commission for Africa in Ethiopia's capital Addis Ababa, local resident Rakeb Million said, "What amazed me the most is their sense of togetherness and closeness. They (Chinese people) look very beautiful as they celebrate the new year together." 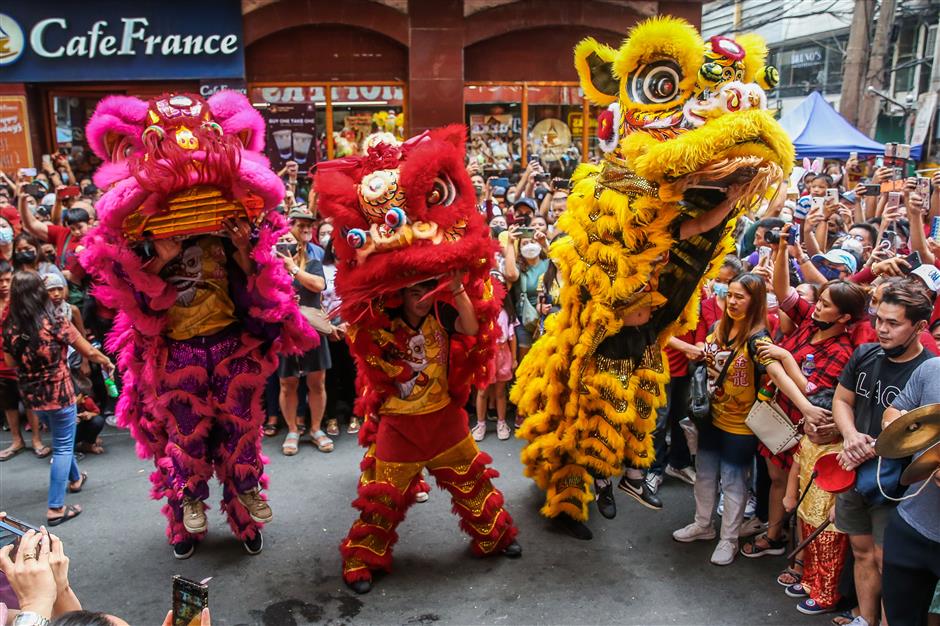 Visitors watch the lion dance in China Town in Manila, the Philippines, on January 22, 2023.

Many overseas Chinese have expressed their best wishes to the motherland.

"We are very proud of the development and progress of our motherland," said Deng Zhuting, president of London Chinatown Chinese Association. "We will continue to tell China's story well on the world stage and promote steady and sustained China-UK friendly exchanges."

Besides, global leaders have also delivered their wishes to those who observe the Chinese New Year.

In a video message released on Wednesday, UN Secretary-General Antonio Guterres said, "I am pleased to send my warmest greetings as we enter the Year of the Rabbit. The rabbit is a symbol of energy and dexterity. These are qualities we need as humanity faces hardship and tests."

"I thank China for your strong partnership with the United Nations and support for international cooperation. By working together as a global community, we can advance peace, sustainable development and a better world for all," he said.

"On behalf of the government and the people of Tanzania, I extend my warmest wishes to all Chinese as you celebrate your Chinese New Year," Tanzanian President Samia Suluhu Hassan tweeted.

"It is with distinct pleasure and sincere feelings of friendship that I join your celebrations today on the joyous occasion of the Chinese Lunar New Year, the Year of the Rabbit, a symbol of good fortune, great ambition, bright future, wealth and prosperity," Cypriot President Nicos Anastasiades said Friday via video.

Lucie Milebou Aubusson, president of the Gabonese Senate, said, "I am honored to address the brotherly Chinese people as the president of the Senate and on behalf of the upper house of parliament and send our sincere wishes of health, happiness and prosperity."

Former Japanese Prime Minister Yasuo Fukuda extended his wishes that everyone could "jump high and far" in the Year of the Rabbit. "I wish everyone good health, and wish peace and prosperity for China, Japan, Asia and the world at large."