Within five weeks, China has contained the spread of the contagious COVID-19 Delta variant. This achievement has attracted largely positive comments from a host of foreign news agencies, including CNN, which often reports negatively about the country.

"If the trend continues, China could become the world's first country to control a major Delta outbreak," CNN commented in a recent report, which came on the heels of China's announcement on Monday that there had been no new locally transmitted COVID-19 cases since August 22. 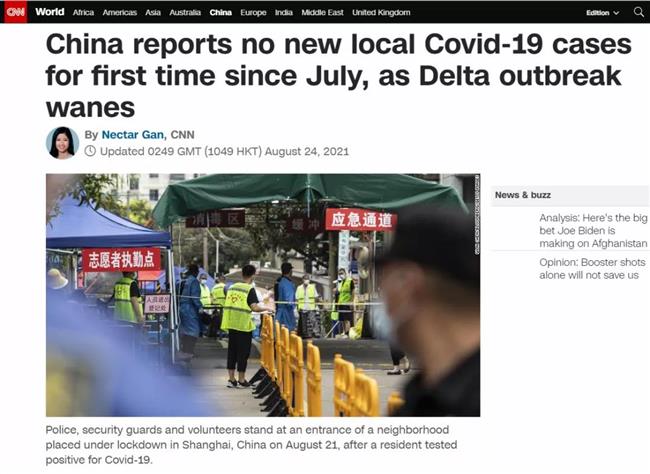 The current round of the pandemic started on July 20, when airport cleaning staff in Nanjing, capital of Jiangsu Province, were found to have been infected. It then spread to many other regions in the country. But by August 22, it had been stopped, with no more locally transmitted cases reported.

What has attracted the attention of Western media is not just "China speed," but the singular effect of treatment as well. Reuters noted that no deaths had been reported in the current round of pandemic caused by the highly contagious Delta variant. Bloomberg pointed out that all the confirmed patients have survived, and that many of the seriously infected had seen their symptoms relieved. For example, Jiangsu once reported 18 serious cases, prompting fears of possible deaths. But in the end, many seriously infected people turned for the better.

Though acknowledging the effectiveness of China's model for fighting COVID-19, Bloomberg remains "skeptical" about its draconian measures. It claims that other countries may face a conundrum – are they willing or able to follow China's example? 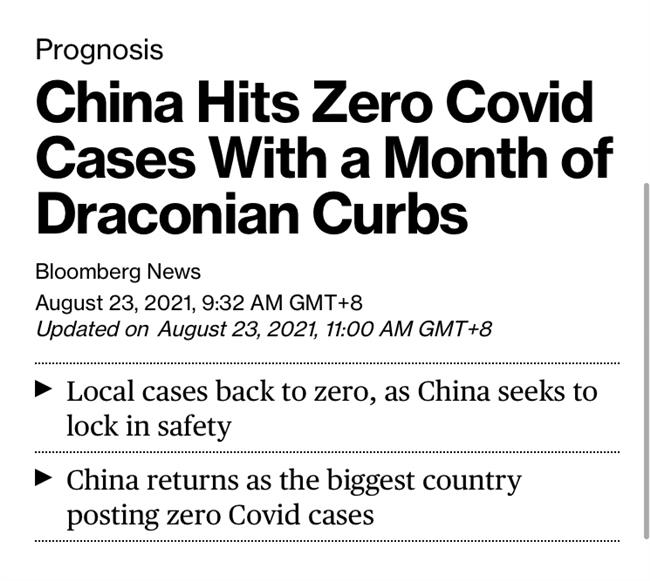 Both Bloomberg and CNN conclude that the current wave of the pandemic caused by the Delta variant has been the biggest challenge so far to China's "zero-COVID-19" policy.

CNN reported that some countries, including China, Singapore and Australia, have sought to eradicate COVID-19 on their turfs. But the latest outbreaks driven by the Delta variant are prompting some countries to rethink their approaches. Take Australia, for example. Sydney has been placed under weeks of lockdowns, but the situation has yet to improve. Indeed, positive cases have continued to surge.

Australian Prime Minister Scott Morrison has said Australia cannot be placed under permanent lockdown, while Singapore has already taken a first step toward living with COVID-19.

At the same time, China has stuck to its "zero-COVID-19" policy. Therefore, CNN says that China could become the world's first country to control a major Delta outbreak if this trend continues.

Reuters echoed CNN's statement by saying that COVID-19 in China has been controlled thanks to the country's "zero-COVID-19" policy, and the strict preventive measures adopted nationwide.

Bloomberg noted that China's nucleic tests have reached an unprecedented level. For example, several dozen rounds of such tests were carried out in Yangzhou, Jiangsu Province, to ensure no case of infection went undetected. While acknowledging the positive role of lockdowns, Bloomberg claimed that local business operations and daily lives had somehow been affected. 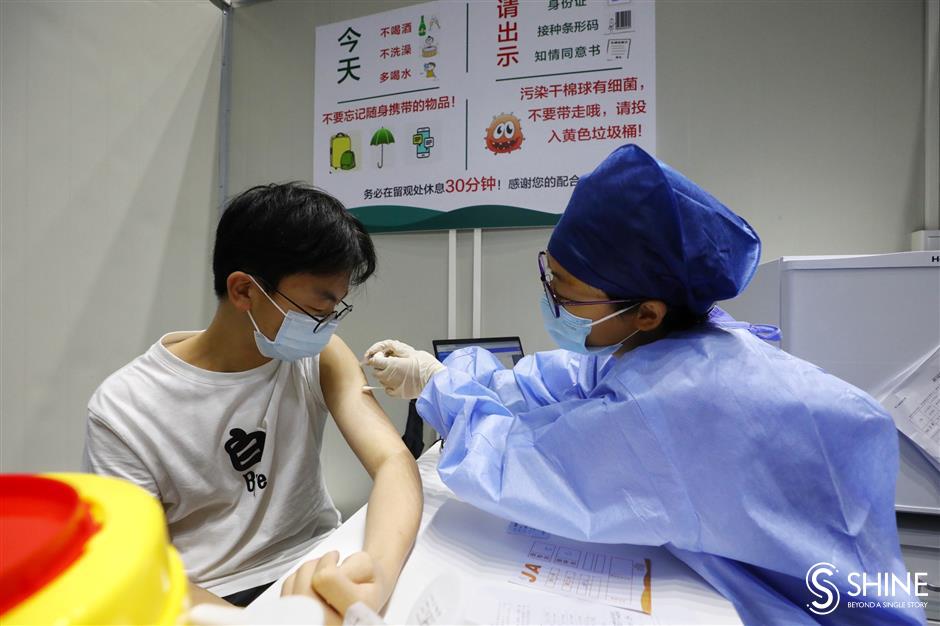 A high school student has his first vaccine shot at Jing'an Sports Center in Shanghai.

The South China Morning Post pointed out that China's successful containment of the current viral spread was unequivocally the result of the country's "zero-COVID-19" policy, coupled with a massive number of vaccinations and tests, among other factors.

As for vaccinations, CNN reported that as of Sunday, China had administered more than 1.94 billion doses of domestically made COVID-19 vaccines. In the breakdown, more than 135 doses have been administered per 100 people, a ratio higher than that of the United Kingdom and United States.

China's top epidemiologist Zhong Nanshan said at a public forum on August 20 that based on previous studies in Guangzhou, Guangdong Province, the overall efficacy rate of domestically made inactivated vaccines in fighting the Delta variant was close to 60 percent. In serious cases, those domestic vaccines were 100 percent effective against Delta. Zhong said China could establish an effective herd immunity after more than 80 percent of its population have been properly vaccinated.

Reuters quoted economists who said the draconian preventive measures might affect China's economic growth in the second quarter to some extent. It also quoted a medical expert from Oxford University as saying that China will unlikely give up these measures very easily, which have proven effective in reducing new cases.

﻿
Special Reports
﻿
'China could become the world's first country to control a major Delta outbreak'
How Western media politicized China's Olympic success, and why
Weighing up the repercussions of fandom run amok
Galactic journey to reach the city's new planetarium, but it's worth it
An interview with Lin Songtian: 'We need to carry forward the spirit of internationalism'
Washington must lift its sanctions and embargo against Cuba
Cuban political and socio-economic situation stable in spite of US sanctions and pandemic
When salary becomes the sole measure of a job
Villagers fight for their livelihoods as floodwaters lap at doorstep
Those that can: the carefree life of teachers
EXPLORE SHINE