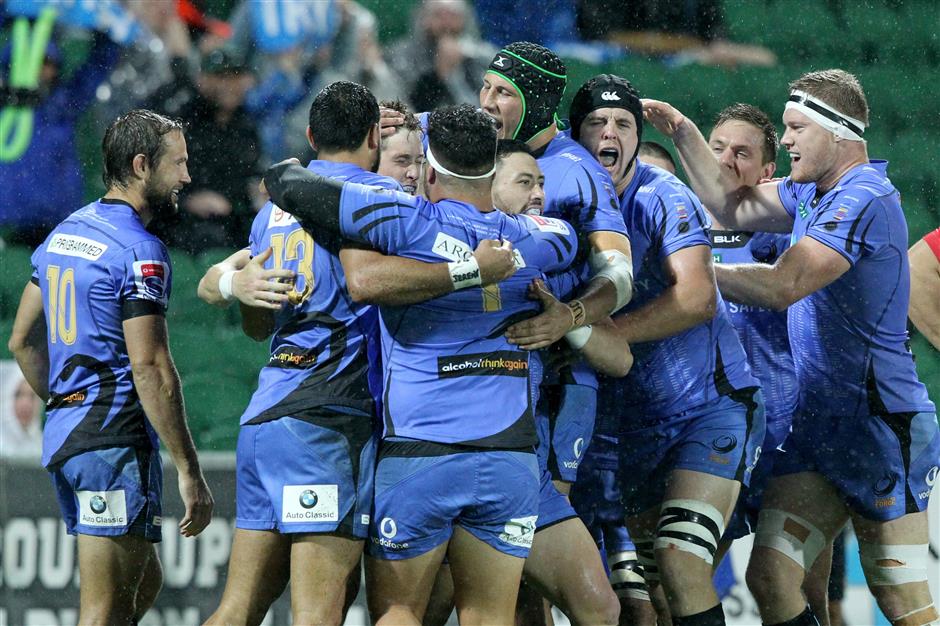 Western Force players celebrate a try during their Super Rugby match against the New South Wales Waratahs at the NIB Stadium in Perth, Australia, in this July 15, 2017, photo.

Western Force opened its legal fight to remain a Super Rugby team on Monday as it requested an appeal against the decision to ax it and won an injunction against the Australian Rugby Union.

Western Force has fallen victim to Australia's decision to cut one of its five Super Rugby teams as the unwieldy, globe-trotting competition slims down from 18 sides to 15 next year.

It expects to find out by August 21 if it is able to appeal. The injunction, granted on Monday, means the ARU cannot sack or relocate any of Force's players until the issue is resolved.

Rugby WA enjoys the heavyweight backing of billionaire mining magnate Andrew Forrest, who has called for a complete overhaul of the ARU board.

The ARU won an arbitration case against Rugby WA last Friday and immediately moved to ax the Force from Super Rugby.

The central issue in arbitration was whether the ARU had the right to ax the Force under the terms of the 'alliance' deal the two parties formed last year.

The ARU bought the Force's license as part of that agreement, and guaranteed the franchise's future until the end of the broadcast deal in 2020.

But the ARU successfully argued that the old broadcast deal no longer existed as a new one was negotiated following the move to cut from 18 to 15 Super Rugby teams.

In the immediate fallout from the contentious decision to cull the Force, ARU chief executive Bill Pulver announced his resignation, saying the body needed a "clean slate".

ARU director Geoff Stooke, who is from Western Australia, stepped down in protest at the Force's demise.

The Rugby Union Players' Association condemned the axing of the Force as the "darkest day in the history of Australian rugby".