Justin Thomas has completed the first all-American world top three in seven years following his victory at the US$9.25 million CJ Cup in South Korea.

The 24-year-old displaced Japan's Hideki Matsuyama from No. 3 in Monday's new standings, which was headed by top-ranked Dustin Johnson and Jordan Spieth.

The last time it was an all-US top three was on May 9, 2010, when Tiger Woods, Phil Mickelson and Steve Stricker ruled the roost.

The following week England's Lee Westwood broke into the top three and years of US domination was ended _ until now.

Thomas is skipping this week's WGC-HSBC Champions in Shanghai having played an exhausting schedule of nine events in the past 11 weeks.

The last two weeks have been in Asia, where he missed out on a hat-trick of CIMB Classic titles in Malaysia but made up for it by winning the CJ Cup, the first ever US PGA event to be held in South Korea.

Matsuyama is the defending champion when the WGC begins on Thursday, and a repeat of his runaway seven-shot win last year could see him leapfrog back into the top three.

But Thomas will not be too concerned. "I'm looking forward to doing nothing," he said after his Korea win, his third in his last seven outings which included the US PGA and the Dell Technologies Championship in the FedEx Cup playoffs.

After Thomas won the Tournament of Champions in Hawaii in January, three-time major winner Spieth predicted that the floodgates would open for him, and how right he was.

Thomas stayed in Hawaii and won again the following week at the Sony Open.

Sunday's windswept playoff win over Australian Marc Leishman on Jeju island was his seventh US PGA title and came exactly 12 months after his second, a successful defense of the CIMB Classic in Malaysia. 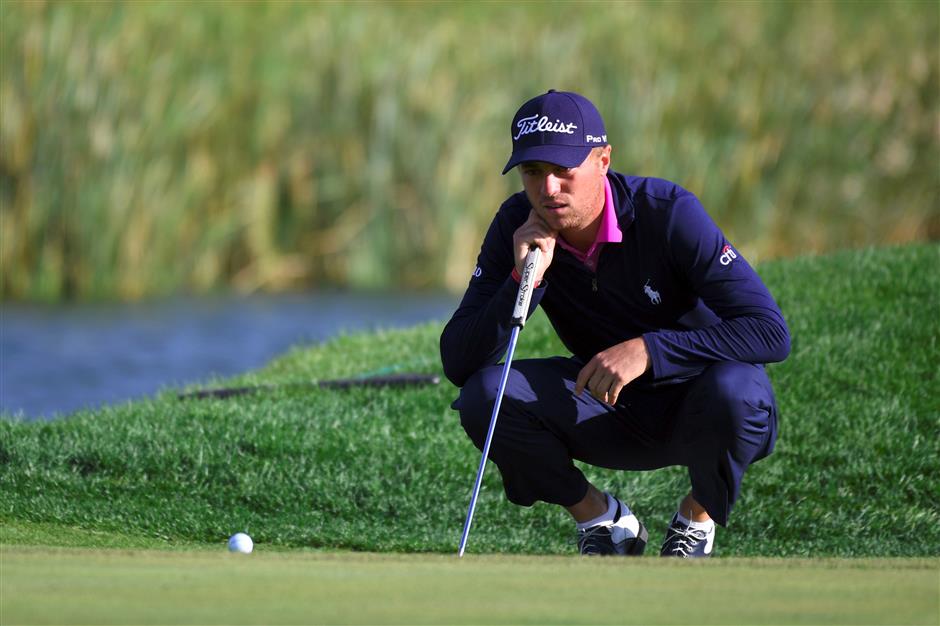 Justin Thomas of the United States lines up a putt on the 18th green during the final round of the CJ Cup at Nine Bridges on Jeju Island, South Korea, on October 22, 2017.

Thomas and Spieth are part of a group of outstanding former US college players dubbed the "Class of 2011" which also comprises PGA Tour rookie of the year Xander Schauffele and Asian Tour order of merit leader Gavin Green of Malaysia.

The records keep tumbling for the seemingly unstoppable Thomas as he emerges as the sport's latest superstar twenty-something.

His opening round of 63 at Nine Bridges on Jeju is a course record and equalled his first-round score at Erin Hills this year, which was the lowest score relative to par in US Open history.

At the Sony Open, his 59 made him the youngest player to record a sub-60 round on the PGA Tour at 23 years, nine months and 14 days.

And Thomas had already joined Jack Nicklaus, Woods and Spieth as the only players to win five times in a season, including a major, before the age of 25 when he won the Dell Technologies Championship.

That is exalted company for Thomas, perhaps the most famous sportsman to emerge from Louisville, Kentucky, since Muhammad Ali.