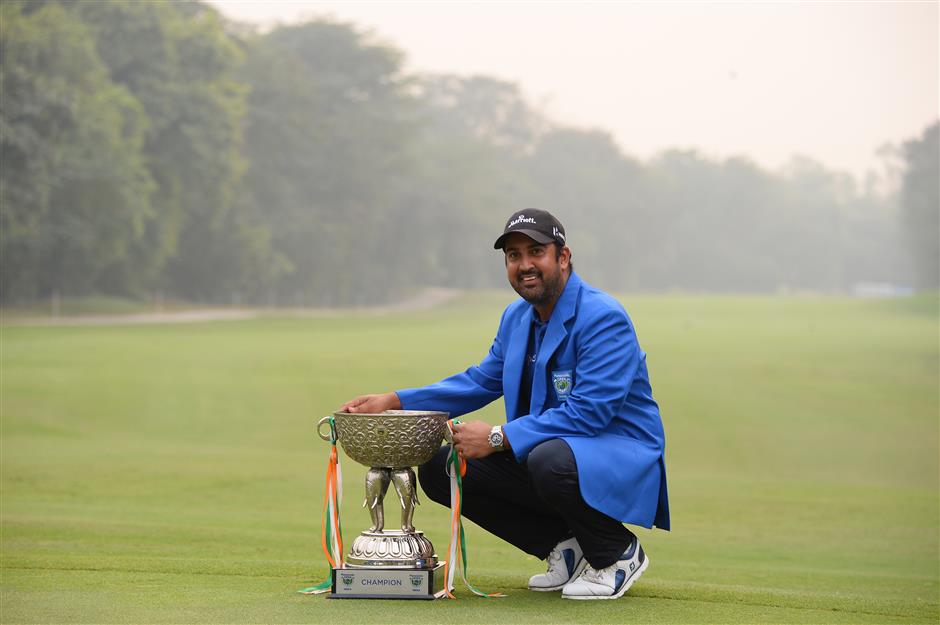 India's Shiv Kapur poses with the trophy after winning the Panasonic Open at the Delhi Golf Club in New Delhi on November 5, 2017.

India's Shiv Kapur won the Panasonic Open by three strokes on Sunday to win his first Asian Tour title at home and second of the year.

Playing on his home course at the Delhi Golf Club, the 35-year-old Kapur carded a final-round 4-under-par 68 for a winning total of 17-under 271.

"It's an amazing feeling," an emotional Kapur told reporters. "This victory has not really sunk in yet but when I was walking down the 18th, I was really trying to hold back the emotions.

Only a shot separated the players at the top of the leaderboard before Kapur pulled away from the chasing pack with four birdies in five holes, starting from the 11th.

Kapur's two previous Asian Tour titles came at the Volvo Masters of Asia in Thailand in 2005 and at the Yeangder Heritage in Chinese Taipei this year.

"To be able to win in front of all my friends and family is wonderful. I grew up playing golf here and told myself I got to win at the Delhi Golf Club one day," Kapur said.

"So no words can actually describe how I'm feeling right now. The reception I got when I was coming up the 18 was just amazing. It was well worth the wait."

In Las Vegas, Nevada, young American Beau Hossler fired a bogey-free 5-under 66 in tough conditions on Saturday to tie overnight leader JJ Spaun heading into the final round of the Shriners Hospitals for Children Open.

Hossler, 22, finished with birdies at the 15th and 18th holes to reach 9-under as the wind whipped up during the third round at the TPC Summerlin course.

"It was one of those days you don't get wrapped up in the score because it was playing so difficult," Hossler told the Golf Channel.

"My short game kept me in it. And at the end of the day, I had a nice round."

Spaun had a more challenging third round with three bogeys in his first five holes and another at the 17th leaving him with a 2-over 73 and a share of the lead.

"The biggest accomplishment is still having a shot tomorrow to win the tournament. That's all I can ask for," Spaun said.

"It was a matter of keeping things together. To not fall off coming in helps me have confidence for tomorrow."

Spaun and Hossler are three clear of compatriot Tony Finau, who shot a 69 for third place. Four players were in a share of fourth at 5-under.

Hossler came into the spotlight back in 2012 when he qualified for the US Open at the age of 17 and finished tied for 29th. He turned professional in 2016 and last week in Mississippi recorded his first top-10 finish in 14 starts.