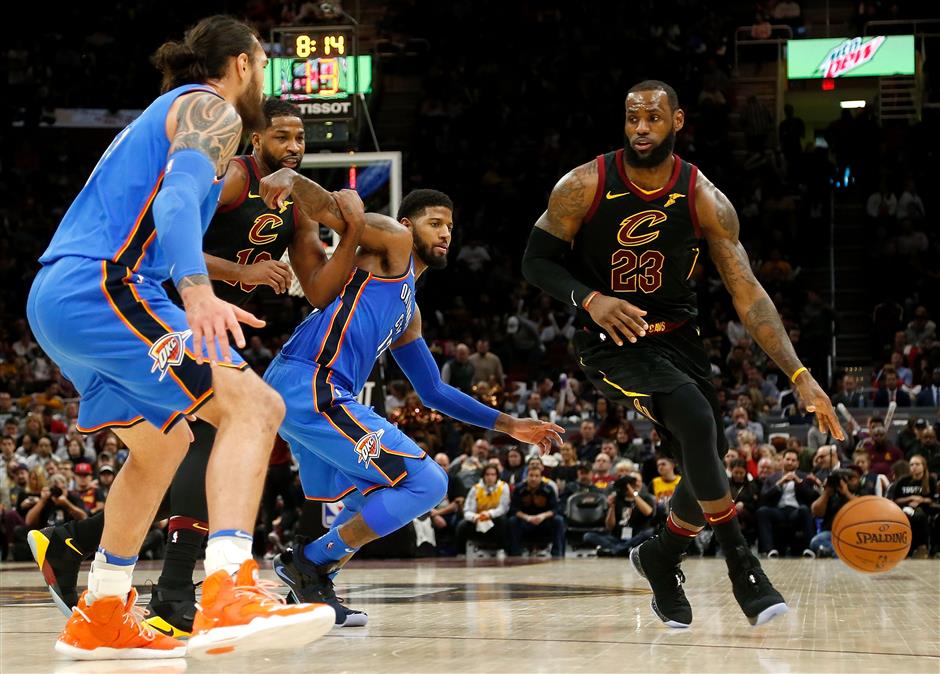 LeBron James (right) of the Cleveland Cavaliers drives the ball past a host of Oklahoma City Thunder players during the third quarter of their NBA action on Saturday.

LeBron James looked at the evidence after Saturday’s demoralizing loss to the Oklahoma City Thunder and came to a devastating conclusion: The Cleveland Cavaliers aren’t a very good basketball team right now.

The Oklahoma City Thunder steamrolled Cleveland 148-124 on Saturday to drop the Cavaliers to 3-9 since Christmas Day. The 148 points allowed match the most the franchise has ever given up in a regular-season game.

“I’ve never in my basketball life gave up 148 points, not even probably playing video games,” James said afterward. “They got everything that they wanted. Inside, outside — they had it moving. ... It’s just a really bad, really bad loss on our part.”

James also isn’t feeling too good about his team’s chances of reaching the NBA Finals for a fourth straight season.

“Playoffs? We can’t even start thinking about that, not the way we’re playing right now,” James said. “We could easily get bounced early in the playoffs if they started next weekend. Haven’t even began thinking about the postseason.”

The recent struggles have sent the rumor mill into high gear regarding the status of coach Tyronn Lue.

James has always been in Lue’s corner and the team’s ineptitude over the past six games — losses of 34, 28 and now 24 have occurred during the stretch — hasn’t changed his sentiments.

“I would hope not, but I really don’t know,” James said of whether Lue’s job could be in jeopardy. “I don’t know what’s going to happen with our team. I have no idea what conversations have been going on. Me personally, I’ve been trying to stay as laser-sharp as I can to keep my guys ready to go out and play.

“Obviously, it hasn’t resulted in wins, but I got to stay as fresh mentally as much I can with the struggles. I can’t worry about job securities and trades and things of that nature. I just stay as focused as I can every night to go out and compete and try to help us win ballgames.”

Lue said he and the assistant coaches are still connecting well with the players.

“I think so,” Lue said. “I think at times matchup based, it’s tough — a lot of matchups on the floor — but they respond. Not giving up on us and we’re not giving up on them, so, that’s not a problem at all. That wouldn’t be the case.”

Point guard Isaiah Thomas was disturbed over Saturday’s contest, which saw the Cavaliers give up at least 33 points in every quarter as Oklahoma City shot a scorching 58 percent from the field.

“It’s embarrassing,” Thomas said. “It’s not acceptable. We can only go up from here, that’s the only positive about that. We’ve got to really look in the mirror, look at ourselves and get some pride.”

When asked to compare Cleveland to the Boston team he starred for last season, Thomas said the Celtics were a better defensive team. He also had no trouble picking which team showed up to the arena with a higher intensity level.

“I think on that end we do not trust each other, and that has to change.”