Biggest score gap record created in the first round of CSL

Biggest score gap in the Chinese Super League’s history was created after Shanghai SIPG whitewashed CSL new comer Dalian Yifang 8-0 during the first round of the 2018 league.

Both Oscar and Wu Lei contributed a hat-trick in the massacre at Shanghai Stadium on Saturday evening, added by goals from Hulk and Lu Wenjun, giving Dalian a bitter welcome after the team’s return to China’s top-tier league.

Compared to SIPG, which made little change in team squad this year except for naming Portuguese Victor Pereira the new manager to take over from his countryman Andre Villas-Boas, Dalian invested big before the start of the season by signing Belgium international and Atletico winger Yannick Carrasco, Portuguese international Jose Fonte, Argentine international Nicolas Gaiton, as well as domestic defender Yang Shanping (on loan) who played for Tianjin Quanjian last year.

However, SIPG didn’t give the new comer any time to get used to the CSL pace when Oscar scored the opener just 30 seconds into kick-off. The Brazilian found net again in the 24th before Hulk’s goal from the penalty spot gave SIPG a 3-0 lead before the halftime interval.

Wu Lei scored in the 60th and 65th before Oscar completed his hat-trick in the 75th. Wu and Lv Wenjun then scored in the 83rd and 84th to create CSL’s biggest score gap. 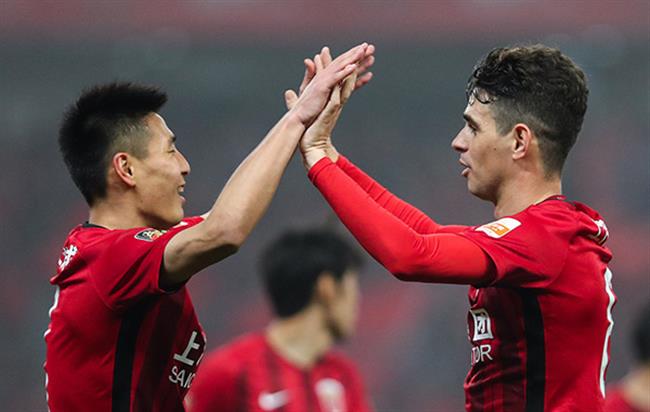 Oscar (right) and Wu Lei both scored hat-trick in Shanghai SIPG's 8-0 victory against Dalian Yifang in their CSL clash.

“To win 8-0 is the result of teamwork,” SIPG manager Pereira said after the victory. “We had limited information on Dalian but I know their foreign players well. We knew we couldn't afford to give them any space to hit us on the counter-attack and I used some videos to show my players how we needed to deal with losing possession.”

“I’m happy because we didn’t concede any goals. Sometimes when you start to score, the team loses organization. But today we managed to keep the organization. If you want to be a top level team, you have to keep the balance all the time, to score and to avoid conceding goals,” said the Portuguese.

“The defenders played hard. But we made too many mistakes ourselves which leaded to the defeat and so many conceded goals,” Dalian manager Ma Lin said after the match. “We admit the ability gap between the two teams. We have been trying out different formats in the second half, so as to figure out the best format for the rest of the CSL season.”

All three of Dalian’s new foreign signings started the game. But they had been given too little time to fit into the team and the CSL. Fonte could not stop Oscar in a series of face-to-face situations, who also caused the penalty for SIPG when defending Hulk in the box.

But the match has been widely praised as a “clean” match as Dalian players hardly lost their coolness despite the huge score gap. Dalian only made 11 fouls through the match. Only one yellow card was shown in the match to Dalian defender Zhou Ting in the 89th.

Despite the lack of an official announcement, Dalian Yifang is believed to be taken over by Wanda Group which made a return to the top stage of Chinese football after new two decades.

Wanda Group, which first based in Dalian and now in Beijing, was the major investor of China’s most successful football club Dalian Wanda in the 1990s.

But Wanda founder Wang Jianlin announced the group’s withdrawn from Chinese football after the club’s FA Cup semifinal loss to Liaoning in 1998. Wang thought the club was treated unfairly by the referee in that match. Two years later, Wanda sold all shares of its club to Dalian Shide Group.

Wanda Group has been adjusting its overseas investments in 2018, which sold its stake in Spanish side Atletico Madrid early in February. Wanda Group is also the major shareholder of the club’s official owner Yifang Group.

Yifang Group took over the club in 2015. According to CFA’s regulations, Yifang Group could not sell the club within three years. Therefore, Wanda is expected to be announced as the club’s new owner only after the 2018 season. The club also set a goal of surviving in the CSL this year.

SIPG players appeared to be modest after creating the astonishing score.

“It’s still a three-point match no matter what the score was,” midfielder Cai Huikang said after the match. “We still have a long way to go.”

The last time such big score gap appeared in China’s top-tier league was in 1997 when Shanghai Shenhua lost 1-9 to Beijing Guo’an in the Jia A league.

SIPG’s second CSL match will be a derby clash against city rival Greenland Shenhua at Hongkou Football Stadium on March 10.

Greenland Shenhua was drew 1-1 by Changchun Yatai in its first match of the 2018 season at Hongkou on Friday. Paraguay midfielder Oscar Romero scored for Shenhua in his CSL début in the first half. Changchun equalized in the second half. 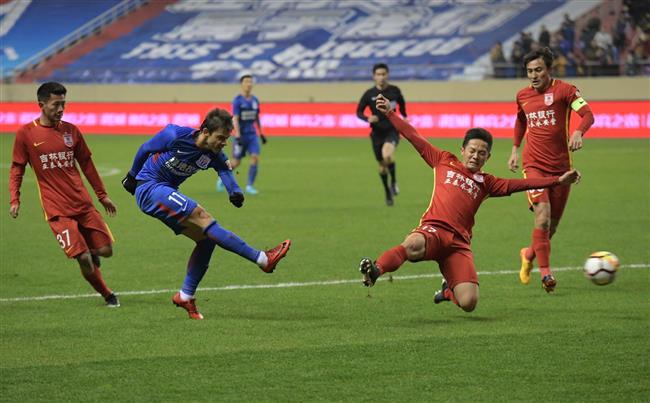 In other first round matches, defending champion Guangzhou Evergrande swallowed a 4-5 defeat to city rival Guangzhou R&F in a Friday match. R&F’s Israeli midfielder Eran Zahavi and Evergrande’s Brazilian striker Alan Carvalho both scored hat tricks. R&F striker Xiao Zhi scored the decider with a header in the 75th to hand the defeat to Fabio Cannavaro’s side.