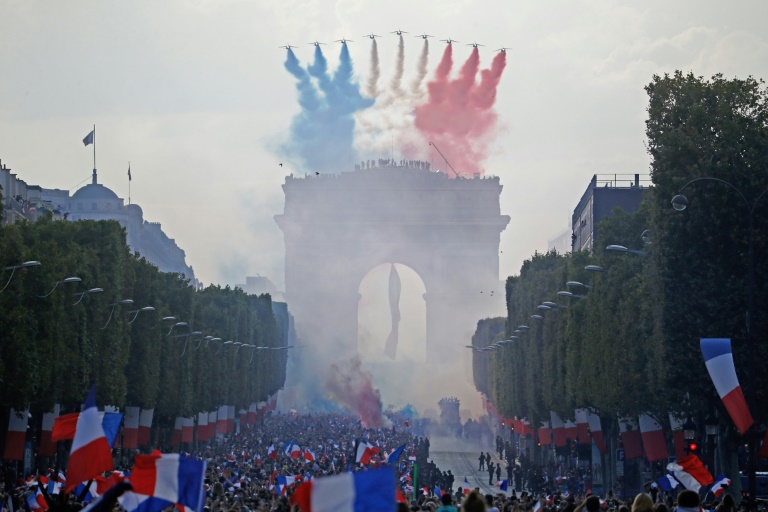 The World Cup-winning French team returned home to a heroes' welcome on Monday, parading down the Champs-Elysees as hundreds of thousands of cheering fans gave a raucous welcome to the country's newest idols.

After overcoming a determined Croatia to win 4-2 in Sunday's final in Russia, the team came back to euphoric crowds in Paris hoping to catch a glimpse of the players that have captured the nation's imagination.

The footballers did not disappoint, passing the golden World Cup trophy from player to player as they jumped and danced on an open-air bus with "World Champions" emblazoned on its side.

"Wow, it was completely crazy! They are too beautiful, France is beautiful!" said Julia Cohen, 28, after seeing players pass by on the Champs-Elysees, the gathering point for all national celebrations.

The parade was under heavy police guard, with 2,000 officers deployed in the capital to ensure the safety of the estimated 300,000 people who turned up.

Above the partying crowds, nine jets from the Patrouille de France, the air force's acrobatic unit, did an honorary flyover trailing blue, white and red smoke.

After leaving the Champs-Elysees, the players changed into custom-made blue suits before being welcomed at the Elysee Palace by President Emmanuel Macron and his wife Brigitte, who were also decked out in blue for the occasion.

Macron has already promised the Legion of Honour for the victors' "exceptional services" to the country, an award given to the legendary team that won France's first World Cup title in 1998.

The first couple then posed with the team as they sang the Marseillaise national anthem and waved scarves for a joyous group photo, before heading inside for a private meeting.

"Thanks to you all!" Macron told the team after gathering again outside. "This team is beautiful because you are united!"

Midfielder Paul Pogba, despite his voice nearly failing him, then proved himself a showman off the pitch as well as on by leading the guests in an impromptu celebratory rap punctuated by "Allez les Bleus!"

"It's true, we went on the pitch, and we said, We're going to crush them all!" he said.

Nearly 3,000 guests were received in the Elysee gardens, including around 1,000 youths from local football clubs such as Bondy, the gritty Paris suburb whose towering housing blocks produced rising star forward Kylian Mbappe.

Some of the children even got to touch the famed trophy, which captain Hugo Lloris handed around.

The guests were also treated to the beats of DJ Snake, who has worked with pop stars including Lady Gaga and is part of the Pardon My French collective of French DJs.

Mbappe, who applied the coup de grace in the final to cement his place as a new global superstar at just 19, said he achieved what he had set out to do -- win the World Cup.

"We are proud to make the French happy," he told French channel TF1.

Striker Antoine Griezmann said: "Frankly, personally, it's not real yet. This cup weighs a lot."

"We are trying to give a good image for France, for French players. I hope that lots of young people will have seen this match and do the same," he added.

Now, "the players are on holiday," Philippe Tournon, head of press for the team, told AFP.

Macron had already celebrated with the team on Sunday -- even doing "dab" dance moves with players in a video that has gone viral -- after attending the final in Moscow.

Some analysts believe the 40-year-old centrist will benefit from the feel-good factor sweeping France, with Macron able to show a common touch after months of criticism from his opponents that he is distant and elitist.

Commentators have also focused on the outpouring of patriotism and sense of national unity created by the multi-ethnic French team, many of whose stars including Pogba and Mbappe hail from deprived and often overlooked suburbs of Paris.

Macron will be relieved that joyous and occasionally chaotic celebrations across the country on Sunday night passed off without any major incident following a string of terror attacks in France since 2015 that have claimed nearly 250 lives.

Some fans outside the luxury Hotel de Crillon were however disappointed after a lengthy wait to see the team, and vented their frustration on police.

Bottles were thrown, people shouted and booed angrily, before police finally broke up the crowd and forced them to disperse.

Overall, some 292 people were arrested nationwide with 31 people, including eight minors, having their detention extended on suspicion of involvement in incidents in Paris during the victory celebrations, a Paris prosecutor said late Monday. 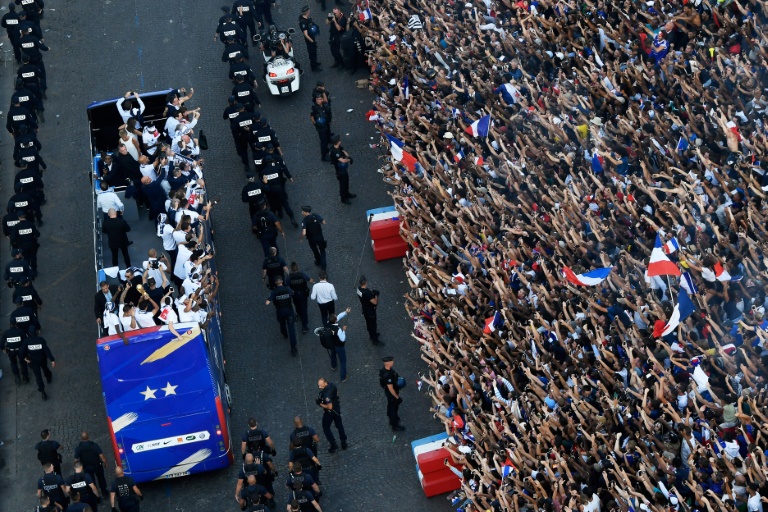 Hundreds of thousands of fans lined the Champs-Elysee parade route, which was secured with a heavy police presence 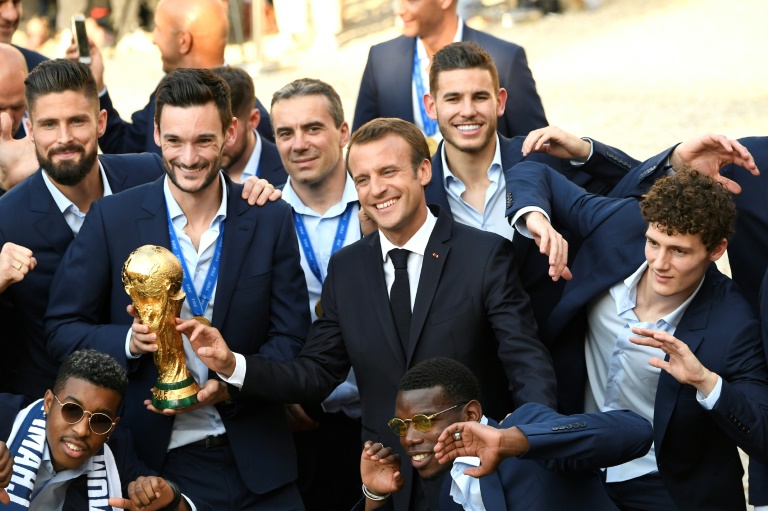 President Emmanuel Macron celebrates with the victorious French side 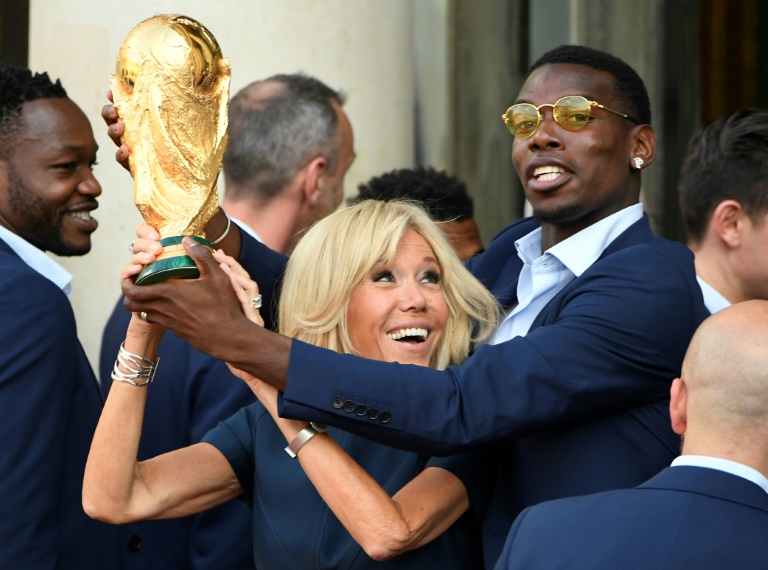 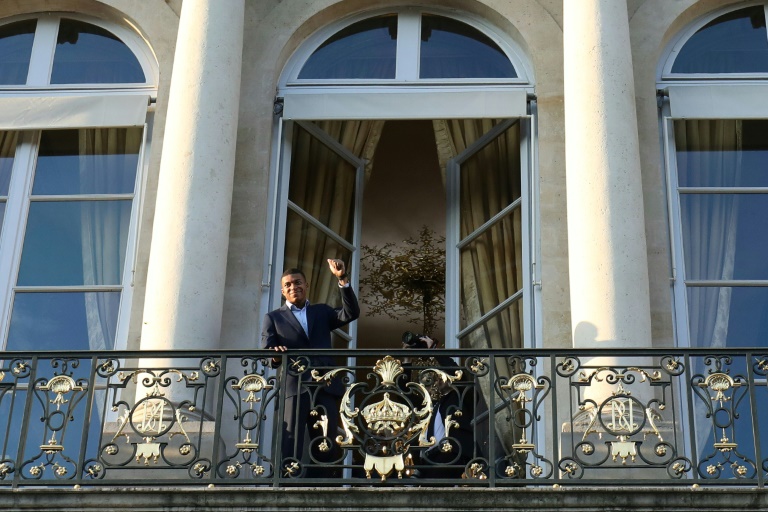 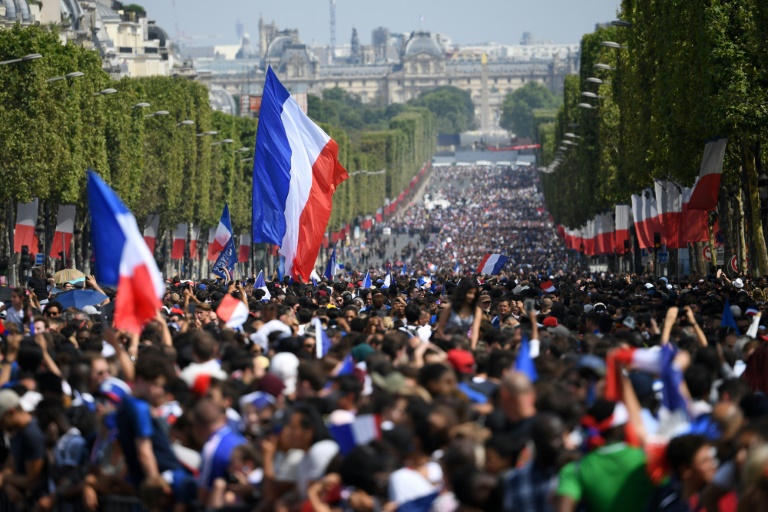 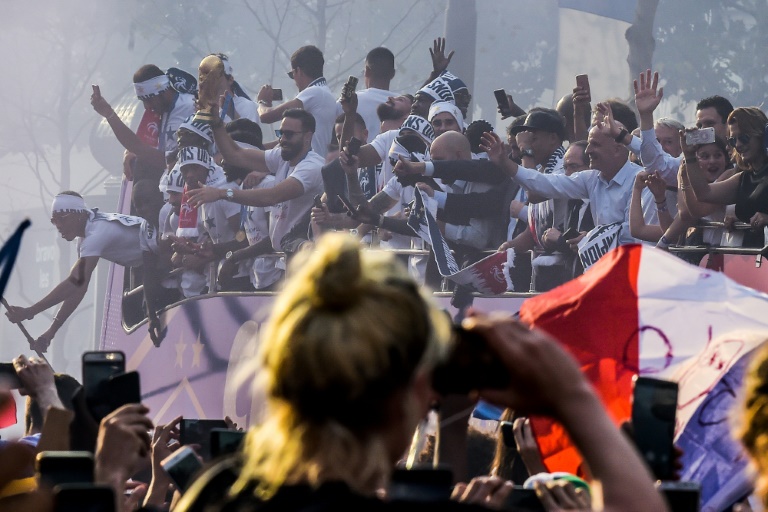