The 32-year-old was the only Japanese-born wrestler to currently hold the top rank of yokozuna.

Kisenosato entered the 15-day tournament in Tokyo with his career already in jeopardy following a miserable run of injuries and form and after losing all three of his bouts decided to retire.

"I have no regrets in my life as a sumo wrestler," Kisenosato said at an emotional news conference on Wednesday.

"(After my injury), I have worked very hard," he added before breaking into tears.

Kisenosato's decision comes after he posted eight successive losses since September, the worst run for a grand champion since the current competition format started in 1949.

"I was delighted when he became yokozuna but when you see him closely, you can tell that he was struggling a lot. These two years went like a flash," his stable master Tagonoura Oyakata said earlier on Wednesday.

On his yokozuna debut, he won a second successive championship but then injuries kicked in to hamper further progress.

Between May 2017 and July 2018, Kisenosato missed eight consecutive tournaments due to injury, the worst record of any grand champion.

Despite his struggles, Kisenosato proved a popular yokozuna in a sport in desperate need of a home-grown champion.

Japan's top government spokesman Yoshihide Suga was one of a number to pay homage throughout the day on Wednesday.

"I would like to give honor to what he has achieved and to send hearty cheers to Kisenosato," he said during his daily briefing.

"Being injured for the last year, I think he was under a lot of pressure as the only Japanese yokozuna," wrote one fan on Twitter.

"It must have taken him a lot of courage to make this decision. Now you are released."

"It was the right decision to retire but we truly miss him," sumo journalist Taro Arai said.

"I feel there is a big hole in the ring, such a huge loss.

"His records as yokozuna were not remarkable at all, but his presence was big, not much less than other yokozunas in the past." 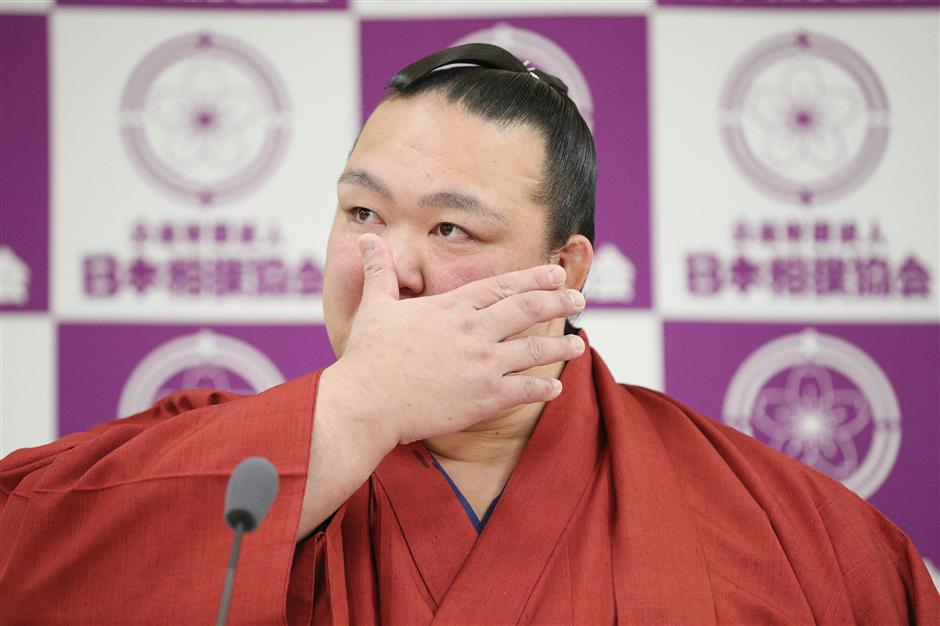 Japan's sumo grand champion or 'yokozuna' Kisenosato reacts after announcing his retirement at the Ryogoku Kokugikan stadium in Tokyo on Wednesday. The only Japanese-born grand champion decided to retire following a disastrous run of form and injury, leaving two Mongolians on top of the ancient sport.