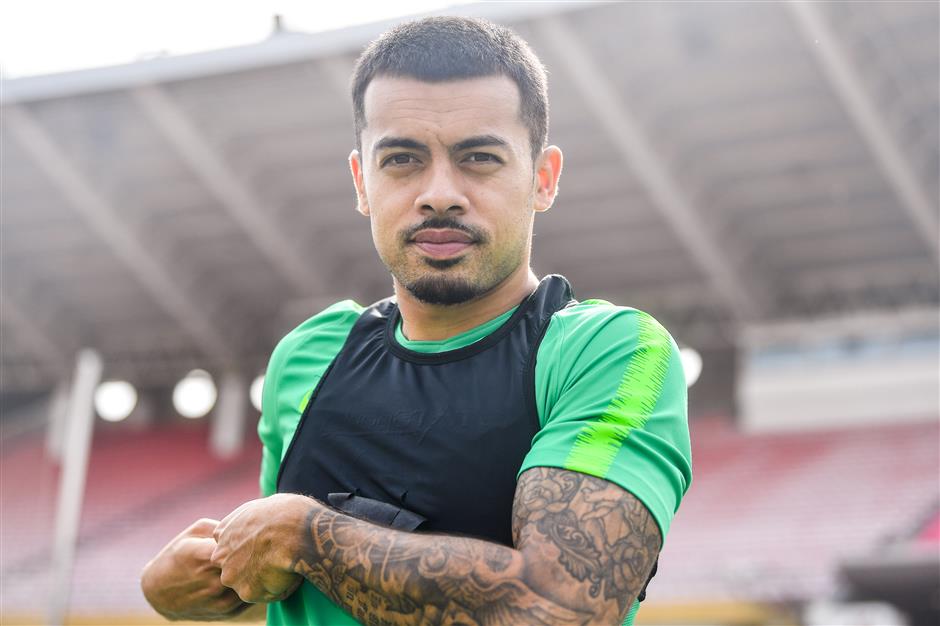 Nico Yennaris, known in China as Li Ke, of Beijing Guoan takes part in a training session before the team's AFC Champions League Group G match against Thailand's Buriram United in Beijing in this April 23, 2019, photo.

The former Arsenal reserve is the first naturalized Chinese to be selected for the country, part of moves by authorities to drastically improve the team's fortunes.

World Cup-winner Lippi has returned as China coach — having left the post in January — and for his first game back, a friendly against the Philippines on June 7, he looks set to give Yennaris his landmark debut.

China had until now resisted fielding players born in other countries, but Yennaris's mother is Chinese and the midfielder joined Beijing Guoan in January registered as a domestic player.

With his paperwork to become a Chinese citizen seemingly completed, the 26-year-old — whose Chinese name is Li Ke — is now poised to help China's bid to reach the 2022 World Cup in Qatar.

China has reached the World Cup only once, in 2002, when it exited without a goal or a point.

Yennaris will undoubtedly help its cause and he has played a key role in Beijing's Chinese Super League title challenge this season.

Chinese media reports suggest that Lippi would also like to call up strikers Ricardo Goulart and Elkeson, but unlike Yennaris, the Brazilians have no Chinese ancestry.

Chinese football fans are broadly supportive of the move to include Yennaris, but are deeply sceptical of naturalizing those with no family links to the country.

Yennaris came through the youth ranks at Arsenal but only made one English Premier League appearance and moved to second-tier Brentford in 2014.

Yennaris, whose father is Cypriot, spent five years at the Championship club before moving to China at the start of the year.

He represented England at under-17, under-18 and under-19 levels, but can play for China because he is not a senior England international.

As part of his switch of nationalities, Yennaris has been learning Mandarin and said he would be proud to represent his adopted country.

China needs all the help it can get, with an aging squad and little in the way of talent coming through.

Underlining that dearth, Lippi again called up Guangzhou Evergrande skipper Zheng Zhi, who will be 39 in August.

China is ranked a lowly 74th in the world in FIFA's rankings, sandwiched between Panama and Cape Verde, but the government has grand ambitions for the country to one day host and even win a World Cup.

First, however, with the 71-year-old Lippi back at the helm, China faces the Philippines and Tajikistan four days later in another low-key friendly.

China will start its campaign to qualify for the World Cup finals in September.