Popularity of NBA in China seems to create endless options 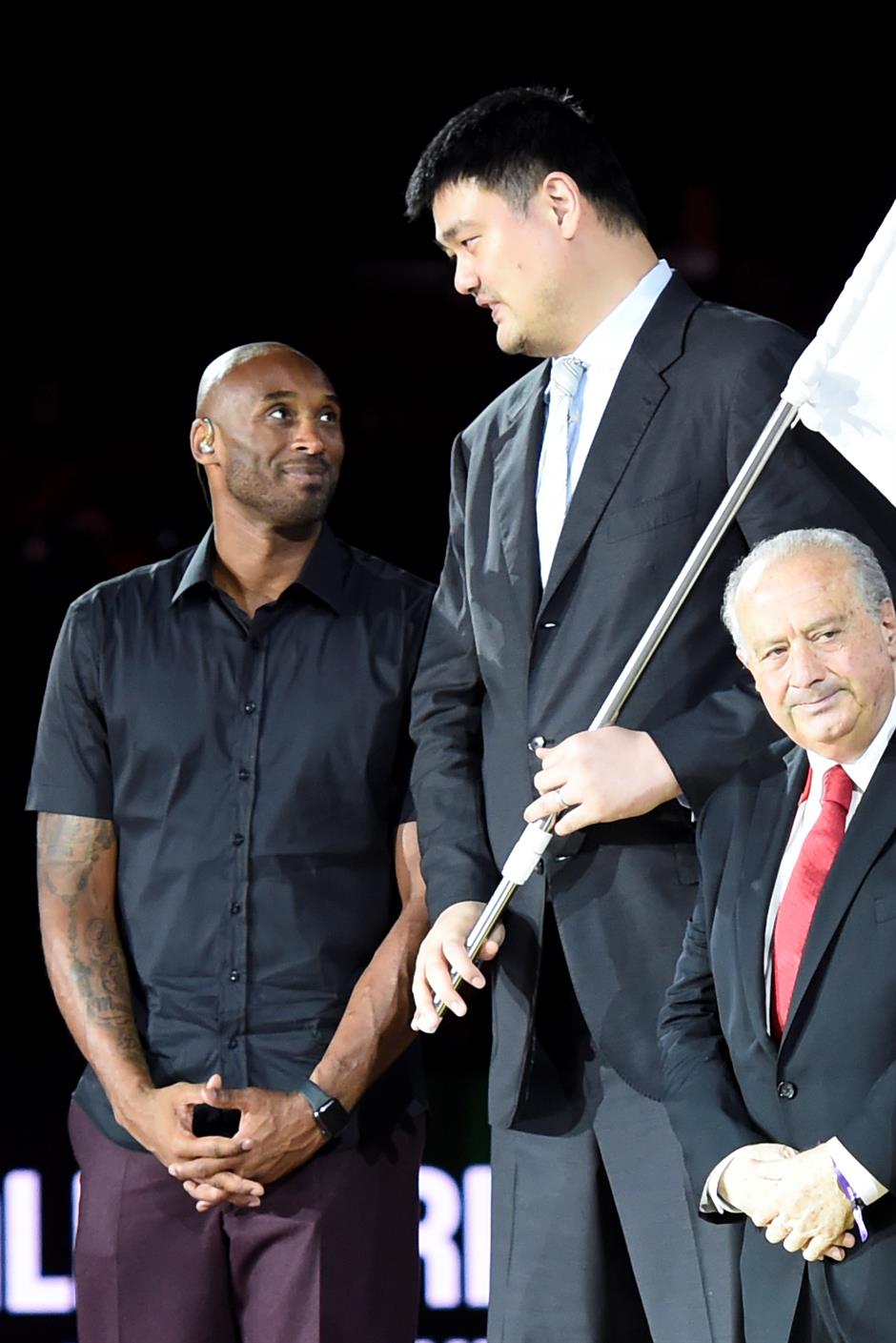 Former NBA players, Kobe Bryant of the United States and China's Yao Ming take part in a ceremony at half-time of the 2019 FIBA Basketball World Cup final between Argentina and Spain in Beijing on Sunday.

Kobe Bryant went to China for the first time in 1998, making the trip to Beijing to help operate an instructional basketball clinic for about a dozen kids. The local coaches working with him didn't know a lot about the game. Barely anyone noticed that an NBA player was in town.

And then everything changed very quickly.

The footprint of the National Basketball Association has grown at an extremely rapid pace over the last two decades in China, where more than 500 million people watched games last season and where one new streaming deal alone will pump US$1.5 billion into the league's coffers over the next five years.

"When I first came here, I never thought the game in China would get to be this big," Bryant said. "But it has. And it's not going to stop."

Could there be an NBA team in China despite the travel that would be involved? Might there be two-way player contracts between the NBA and the Chinese Basketball Association? What about the NBA constructing a team to play in China or the Chinese sending a team for a full season in the United States?

Farfetched as all that may sound, keep in mind that 20 years ago no one envisioned the NBA-China relationship to be this big — or that it would keep growing after Yao Ming's run with the Houston Rockets ended eight years ago. The NBA has academies in China now, and the Chinese national team returned to the NBA Summer League in Las Vegas this year.

"It's a good question," Golden State coach Steve Kerr said. "I think the next step will probably come when the next Yao Ming comes. That would take it to a new level, more Chinese players to reach the NBA and make an impact."

The marriage between the NBA and the world's most populous country is stronger than ever. NBA officials say more than 300 million Chinese people play the game and 40 million are registered to play the 2K video game. Thousands showed up this summer just to watch the sons of Dwyane Wade and LeBron James play exhibitions with the rest of their high school teammates.

A trade war is happening between the U.S. and China, political tensions are escalating between the countries and it could impact the products of the league's business partners. But the game itself continues to thrive.

"I think sports transcends politics and I hope the NBA can continue to connect fans globally," Dallas Mavericks owner Mark Cuban said. "I don't have any reason to think our relationship won't continue to be positive."

Nothing seems to be able to derail the NBA's popularity.

The team that the US sent to the World Cup in China didn't feature the NBA's biggest stars, yet drew sellout crowds for each of its first six games. US coach Gregg Popovich was begged for autographs and selfies everywhere he went.

"We've known for a long time how big basketball has become in China, of course, but all over the world," Popovich said. "It's an international deal now. There are so many great players in so many countries. It's not a secret." 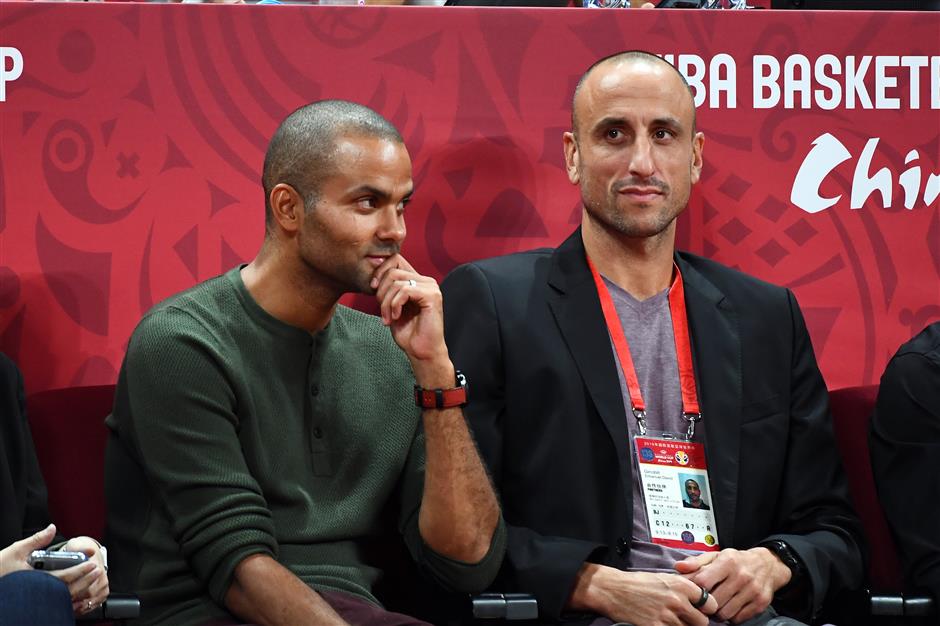 NBA legends Tony Parker of France and Argentina's Manu Ginobili look on during the 2019 FIBA Basketball World Cup final between Spain and Argentina in Beijing on Sunday.

Stars like James, Stephen Curry, and James Harden have a trip to China on their annual schedules — and when Wade, the recently retired guard who has a lifetime contract with Chinese shoe company Li-Ning, visited this summer one of his events had to be halted after about 10 minutes because the mall where it was happening was overflowing with people.

Donovan Mitchell of the Utah Jazz has been to China twice this summer, once to promote his brand, the second time for the World Cup with USA Basketball. He sees it becoming an annual stop for him, too — and believes there is no ceiling for the game globally.

"Man, I couldn't tell you," Mitchell said. "I think it's going to be even bigger and it's not going to be just China. It's going to be many more countries. The (relationship) between the NBA and China has been huge since I was a kid and it can only take off from there ... because the passion and love is so strong."

It's not a one-sided relationship; China sees reason to invest in the NBA.

Joe Tsai, the co-founder of Chinese e-commerce giant Alibaba, agreed this summer to buy the remaining 51 percent that he didn't already own of the Brooklyn Nets and Barclays Center from Mikhail Prokhorov in deals worth about US$3.4 billion. In 2016, Lizhang Jiang, a businessman from Shanghai, bought 5 percent of the Minnesota Timberwolves, a stake he sold earlier this year.

China also takes immense pride in players like Klay Thompson wearing Chinese brands on the court. (Thompson has a 10-year deal with Chinese shoe company Anta for a reported US$80 million.) And China sent its national team to NBA Summer League this past July primarily to get ready for the World Cup, but also for exposure on the NBA stage.

The NBA has opened three basketball academies in China and has seen very quick success with academies in Asia and Africa. The international influence on the league was more present this past season than ever.

The NBA MVP, Giannis Antetokounmpo, is from Greece. The rookie of the year, Luka Doncic, is from Slovenia. The most improved player, Pascal Siakam, is from Cameroon. The defensive player of the year, Rudy Gobert, is from France. The All-NBA center, Nikola Jokic, is from Serbia.

Former commissioner David Stern struck a deal with Chinese television to show games on tape-delay three decades ago, and once toyed with the idea of some sort of NBA-sponsored or branded league in China. Teams embrace the chance to play the annual preseason games in China because the exposure is worth the jet lag.

"When I have 76ers gear on and I walk through Shanghai, walk through Shenzhen, if I had a nickel for every time somebody said 'Trust the process' in perfect English I wouldn't be standing here working," Philadelphia 76ers CEO Scott O'Neil said, referencing the team's motto during its rebuilding phase of recent years. "We're very much a part of the fabric of China."

None of this seemed possible 20 years ago or so, when Bryant made that first trip. Now fans can't get enough.

"When you come here, you feel it from the fans, their energy, people at the hotel, people just walking around," Kerr said in China during the World Cup. "Everybody just seems very excited about basketball."

Same goes for the game's future in China. 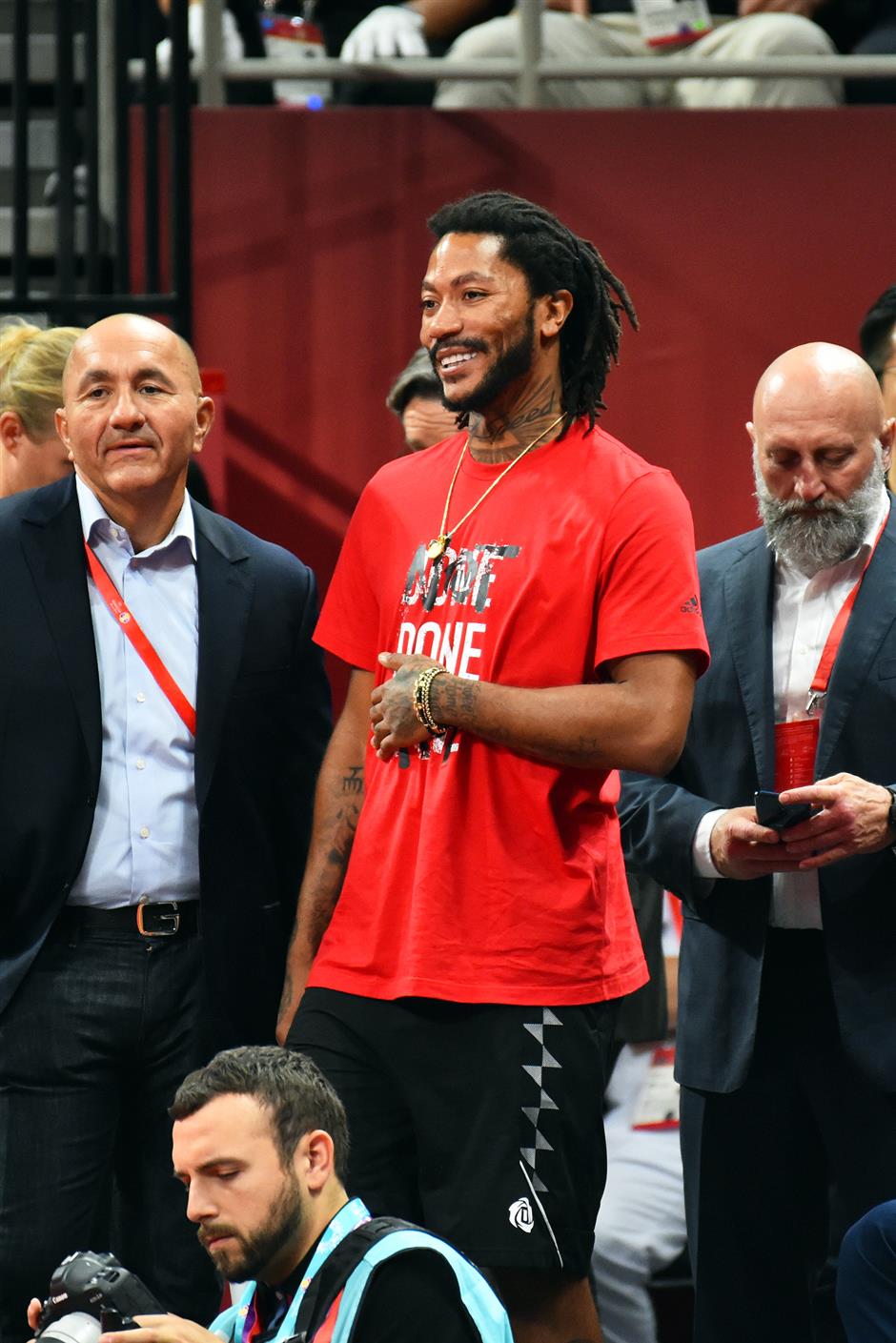 Derrick Rose of the Detroit Pistons looks on during the 2019 FIBA Basketball World Cup final on Sunday.