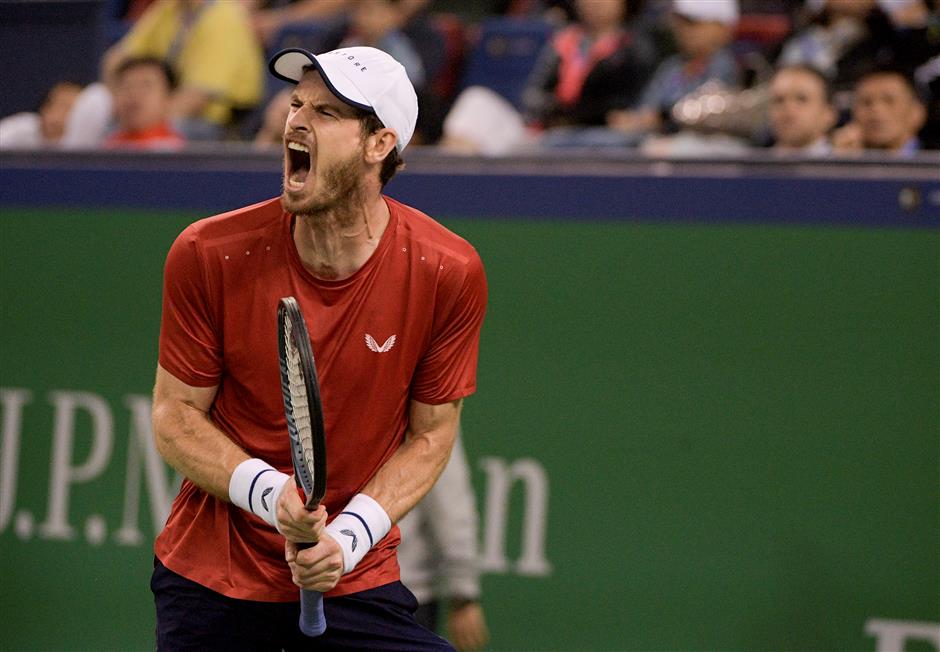 Andy Murray reacts during his first-round Rolex Shanghai Masters match against Juan Ignacio Londero of Argentina at the Qizhong Sports City in suburban Minhang District on Monday. The Scot won 2-6, 6-2, 6-3.

Andy Murray continued to make progress in his comeback from injury by winning his first-round match at the Rolex Shanghai Masters in suburban Minhang District on Monday.

The former No. 1 defeated Juan Ignacio Londero 2-6, 6-2, 6-3 for his fifth tour-level victory since undergoing right hip surgery in January.

"The court is by far the fastest conditions that I have played in since I came back. I really struggled with that early on," Murray said. "I was mistiming the ball. I felt quite slow on the court, and he was pretty much dictating all of the points. I managed kind of early on in the second set to start putting a bit more on my ball, going for my shots a little bit more."

Murray is now 5-6 on tour since returning to action after his successful hip surgery. He won his first singles match at a tour-level event two weeks ago at Zhuhai, southern Guangdon Province, then made it to the China Open quarterfinals in Beijing last week.

"These last few weeks I have played more matches," the Scot said. "It's starting to get a little bit more used to starting to compete at this level again.

"I think each week I have been feeling good, better. In the beginning I didn't necessarily feel good. But last couple of weeks have been, I think, much improved," he said.

Canadian Denis Shapovalov set up a second-round encounter against defending champion Novak Djokovic with a 6-4, 6-2 win over American Frances Tiafoe.

The first game of the match stretched to 15 minutes before Tiafoe held serve, but Shapovalov eventually took control with a break in the first set and two more in the second.

"The start of the match was really important and I was trying to step up from the first game," Shapovalov said. "I think the first game helped me find a rhythm on his serve."

The 36th-ranked Shapovalov played the top-ranked Djokovic on two previous occasions, with both matches taking place this year.

He took the Serb to four sets in the third round of the Australian Open, but only won four games in the second round at the Rome Masters.

"It's going to be a tough one, but I have a great game and I think I have a chance to beat him."

Fellow Canadian Vasek Pospisil upset 14th-seeded Diego Schwartzman of Argentina 7-6 (2), 6-2 in another first-round match. Pospisil won all 33 first-serve points he played in the match. Shapovalov had won 27 of his 29 first-serve points against Tiafoe. 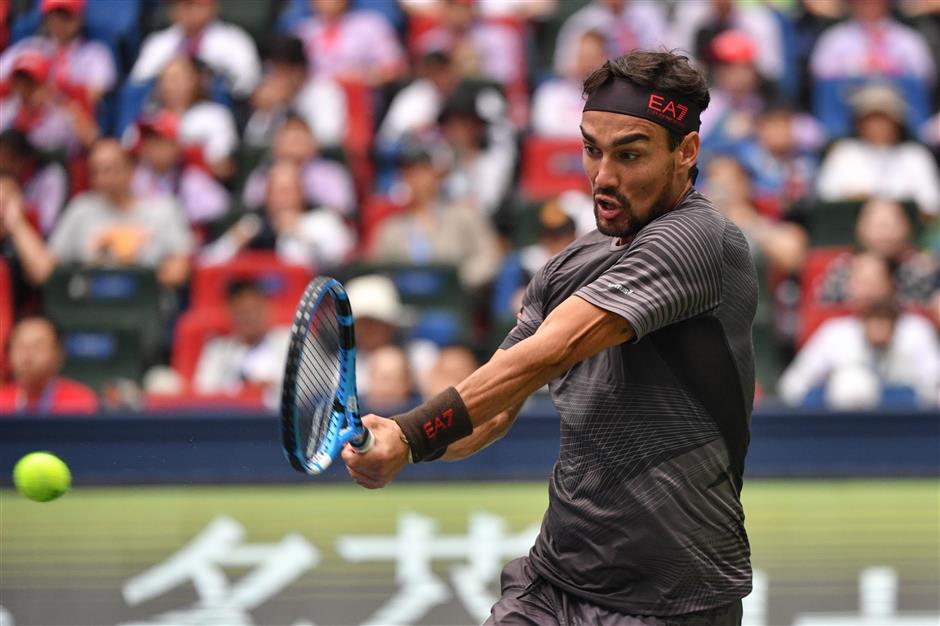 Fabio Fognini of Italy hits a return to American Sam Querrey en route to a 6-4, 6-2 first-round victory at the Rolex Shanghai Masters on Monday.