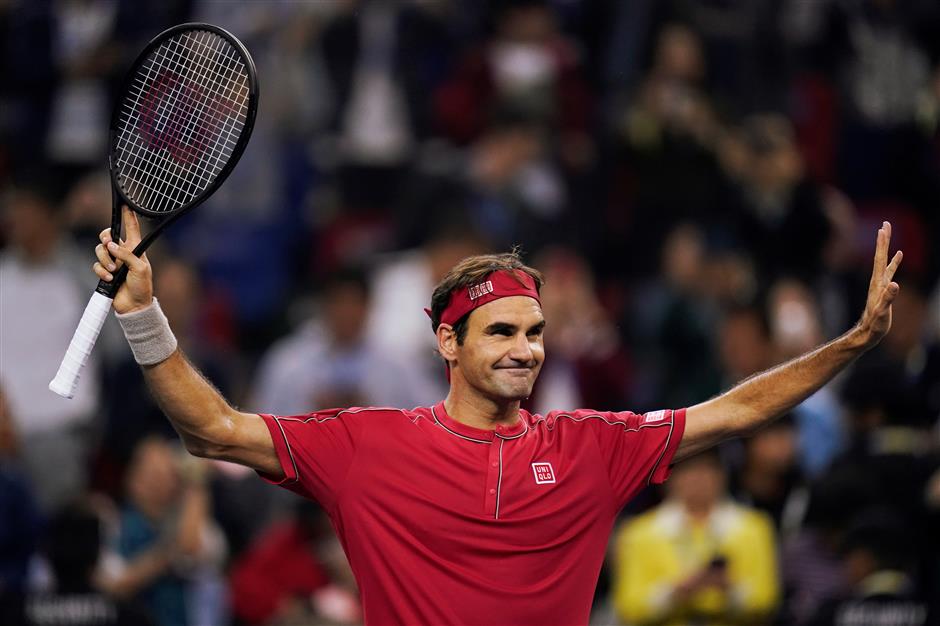 Roger Federer of Switzerland celebrates his 6-2, 7-6 (5) second-round win against Spain's Albert Ramos-Vinolas at the Rolex Shanghai Masters in suburban Minhang District on Tuesday.

Roger Federer didn't face a break point as he won his opening match at the Rolex Shanghai Masters on Tuesday, beating Albert Ramos-Vinolas 6-2, 7-6 (5).

The second-seeded Federer, who is bidding to win a third Shanghai Masters title, dominated in the first set, but was tested in the second at the Qizhong Tennis Center in suburban Minhang District.

Federer struggled in the tiebreaker, falling behind 1-4, but eventually managed to pull even. He won his lone match point when he executed a forehand crosscourt volley.

"I focused and had good energy, because sometimes, you know, when you travel around the globe, you're missing a bit of energy," Federer said. "Those first few games or matches can be sometimes a bit tricky.

"I think (my) serve was solid. I was hitting my spots and really was never in trouble there."

The last time the two faced each other was in the 2015 Shanghai Masters, where the Spaniard shocked Federer by taking the three-set encounter, and Federer admitted he had that second-round match on his mind on Tuesday.

"All the time," said Federer, when asked if he thought of their previous outing. "The truth, yeah, I was thinking about it. Watched highlights. Remember how it felt. I had my chances. I won many more points that time than I lost, so I should have actually won that match."

"I'm very disappointed right now," Murray said. "There is a lot of things that I need to get better at, and I can do much better. I will go away and I'll work on those things.

"I served for the match twice and lost after three hours, so I want to say that's the first time ever in my career that that's happened."

"I'm really happy with my performance, really happy with the score and am really looking forward to the next round," Medvedev said. "It was my first match here in Shanghai after having a few weeks off, so I was a little bit stressed about how my level would be.

"I managed to get out of there in less than an hour."

Medvedev has reached the final of the last five tournaments he's played, including his first Grand Slam final showing, which came at the US Open, where he lost to Rafael Nadal.

Unseeded Andrey Rublev of Russia upset Croatian Borna Coric 6-4, 7-6 (4) in the first round.

The 12th-seeded Coric was runner-up in Shanghai last year, losing to Serbia's Novak Djokovic in straight sets in the final.

Two Americans — 16th-seeded John Isner and Reilly Opelka — are through to the second round. 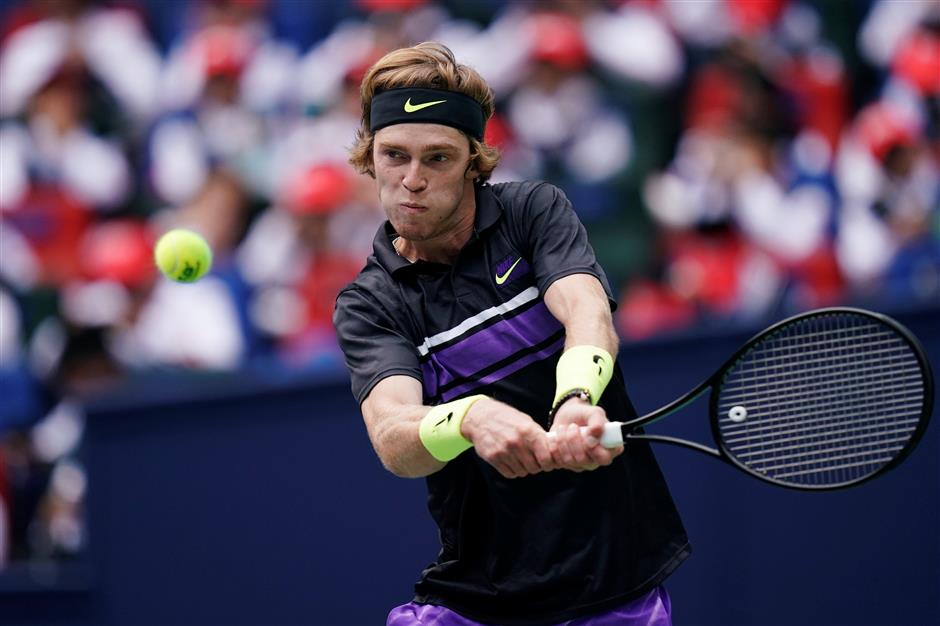 Andrey Rublev hits a return against Borna Coric, the 12th seed from Croatia, during their Rolex Shanghai Masters first-round match at the Qizhong Tennis Center in suburban Minhang District on Tuesday. The Russian scored an upset 6-4, 7-6 (4) victory.