Zhang/Stosur crash out in semis of WTA Finals Shenzhen 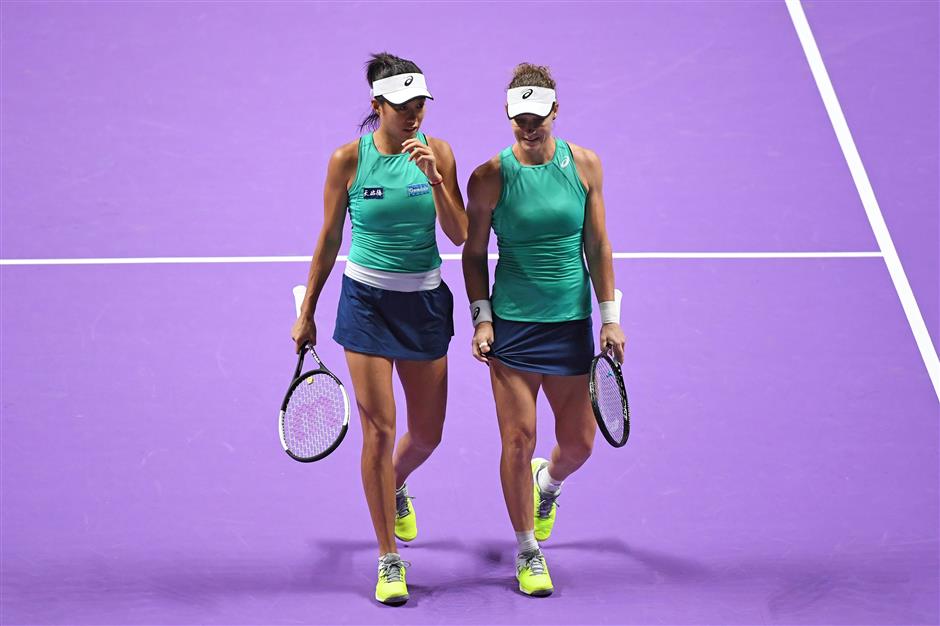 Home favorite Zhang Shuai and her partner Samantha Stosur of Australia fell to defending champions Timea Babos of Hungary and Kristina Mladenovic of France at the Shiseido WTA Finals Shenzhen in Shenzhen on Saturday, 1-6, 6-4, 10-8.

Babos/Mladenovic led the head-to-head record 2-1 going into the match, most recently defeating Stosur/Zhang in the quarterfinals of the French Open earlier this year.

The two sides traded breaks out of the gate, with each pairing holding their opponents to 30. It was Zhang/Stosur who were the looser of the two, getting twice as many unforced errors in the first two games as their opponents.

But the 7th seeds would tighten up and keep clutch for the rest of the opener. They fought their opponents to deuce on every single one of their remaining services and successfully converted each break point they created off 75 percent 2nd return shooting, storming to a 5-1 lead and then holding their next service to seal the opener in just 27 minutes.

But things began to slip up for the home player and her partner from there. Their first service percentage began to plummet as they were broken by their opponents to level the score at 2-all.

The two sides then served out to 5-4 for the Babos/ Mladenovic, who then got a crucial break at deuce to force a deciding tiebreak.

In the tiebreak, an ugly netted unforced from Stosur would surrender the momentum to Babos/Mladenovic and hand them the only match point of the tiebreak, which they converted to seal the chance to defend their finals crown in just over 90 minutes.

"Honestly I just want to take a pillow and scream as loud as I can. I have so much anxiety and happiness. We were not playing our best at the beginning but we fought hard. What a match! It was really a pleasure to play in front of such a great crowd as well," Babos on court said after the match.

Mladenovic then delighted the crowd at the Shenzhen Bay Sports Center, thanking them in Chinese for their enthusiasm and the atmosphere that they created.