Atop the swimming pool where Michael Phelps swept a record eight gold medals at the 2008 Summer Olympics, curlers slid their stones down the icy sheets as the mixed doubles competition's "round-robin" sessions were held today at the Beijing National Aquatics Center. 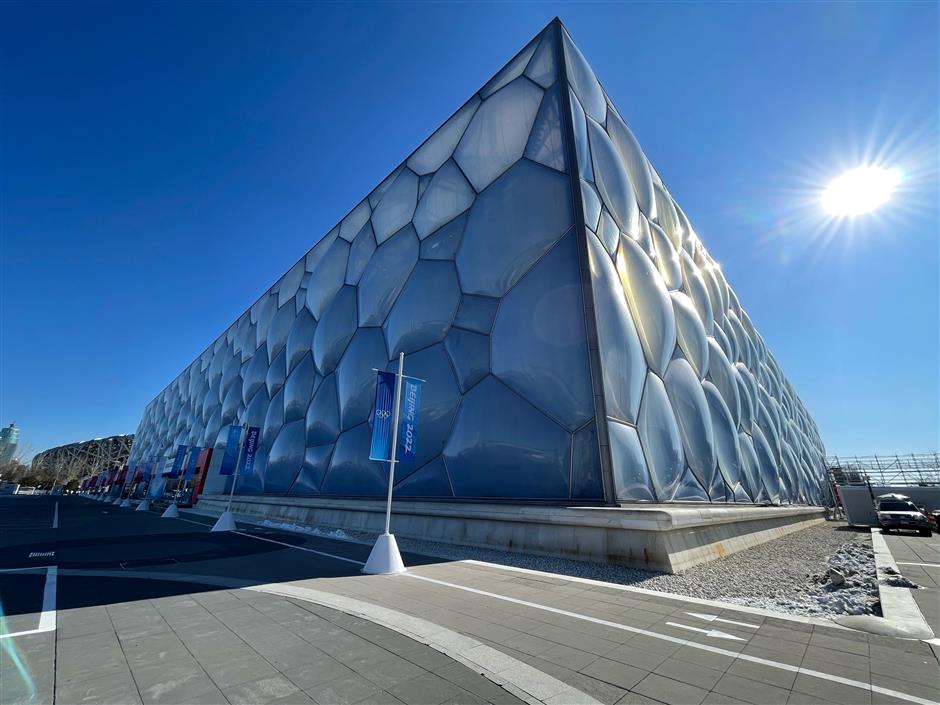 Phelps is an inspiration for all Olympians. Competing in the same venue where his compatriot achieved the impossible is a huge boost, especially for Plys.

On Sunday, he posted a video clip on Twitter and wrote "Dream come true," after visiting the aquatics center with his mixed doubles teammate Persinger.

"Same building that Michael Phelps set all those gold records and gold medals, and now we're gonna curl in the same building. Pretty epic," the two-time Olympian said to the camera.

Phelps shared with his excitement. He replied to Plys a day later, saying "The cube is a special place… Let's go team USA!"

Famously known as the "Water Cube" 14 years ago for its bubbly exterior of translucent blue panels, the boxy building has turned into the "Ice Cube." It is now the rink to host curling events at the 2022 Winter Olympics, which officially opened today, with nine medals up for grabs and some history-making moments to witness on the icy sheets.

After being awarded the Winter Games, officials in Beijing began planning to make the building suitable for curling events without losing its function to host water sports. It took two years to complete the conversion.

After the swimming pool is drained, a convertible structure of 2,600 steel beams and precast concrete panels is assembled to support four 45m by 5m icy sheets for curling. A removable ice-making system is specially designed to cut down on the energy consumed during ice making for sustainability and to make the conversion possible between the "Water Cube" and the "Ice Cube."

The curling rink can be converted back to a pool within 20 days, according to the Xinhua News Agency.

A dehumidification system is equipped to ensure the top-notch quality of the curling sheets. The climate-control system of the building is upgraded to keep the temperature of the curling surface at 8.5 degrees below zero Celsius while keeping the audience warm on the grandstand.

Athletes spoke highly of the refurbished venue and China's efforts to keep its promise "to deliver to the world a streamlined, safe and splendid Games."

"I know the Chinese pretty much didn't cut any corners in trying to make this as great an experience as they could for us curlers and people watching. I think that's cool how they can do that," Canadian curler John Morris told AP. "I think the future of the Olympics is these types of games that are held in previous cities that are more sustainable."

"I love to see these venues be re-used like this, utilizing what's already there. Just walking in the building, you have a little essence of (swimming) pool everywhere, there's a floor drain and tiles, and big mosaic of a koi fish in our dressing room, you can definitely tell it was once a pool," she told Xinhua News Agency.

"I don't want to jinx myself here, but I think it's one of the coolest venues I will ever play in my entire life. I'm so excited."

Curling events will run through February 20 at the "Ice Cube." It will later host wheelchair curling events at the 2022 Paralympics.