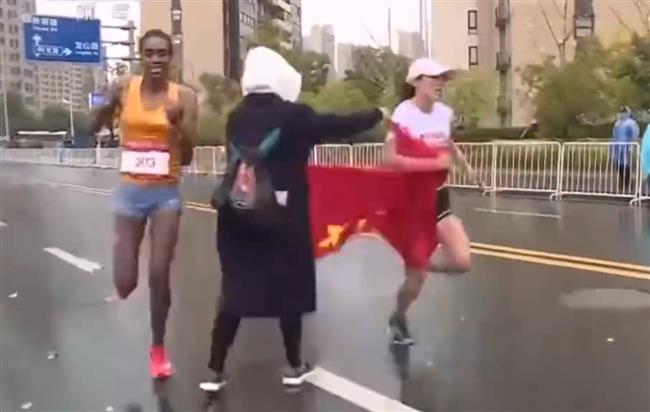 He, whose running pace and breathing was disrupted during the exchange, was then beaten by an African runner and ended up placing second.

As live footage showed, a volunteer tried to pass a national flag to He but failed to catch up with the runner.

A few minutes later, another volunteer waiting for He to pass by rushed to the track to make another attempt. He took the flag this time but failed to grasp it and it fell to the ground.

Some netizens blamed the volunteers for the distraction, while others criticized He for "throwing away" the national flag.

He responded to critics on her Weibo account by saying that the flag was wet at the time and that it slipped from her grasp.

According to the International Association of Athletics Federations, only two staff members are allowed to wait for the champion with hand banners in front of the finishing line. Even the chief referee is banned from the track, said Lu Jidong, international track and field judge and director of the sports department at Shanghai University of Finance and Economics.

Marathon consultant and commentator Wang Xiaogang suggested passing the national flag after the runner arrived at the finishing line or when there was no one around the runner within 300 to 500 meters.

No response has yet been given by the organizing committee of the marathon, the report said.

A total of 30,000 runners from 37 countries and regions around the world participated in the marathon.