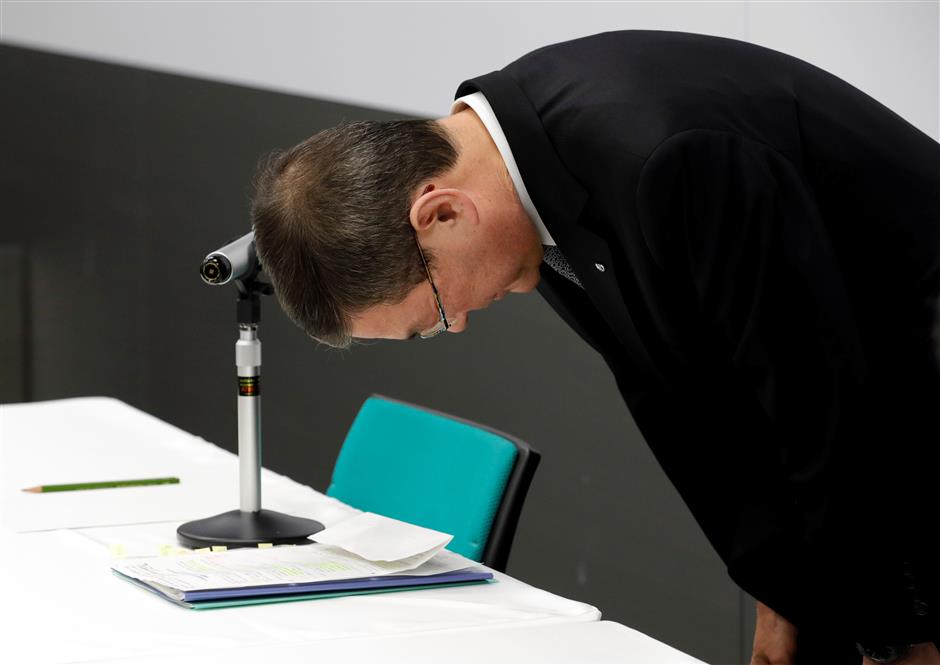 Subaru Corp’s President and CEO Yasuyuki Yoshinaga bows his head to apologize at a news conference at the company’s Tokyo headquarters yesterday.

The CEO of Japanese automaker Subaru said yesterday he and all other executives would return part of their pay until next March following an inspection scandal at the company.

“All executives will voluntarily return part of their pay,” CEO Yasuyuki Yoshinaga told a press conference.

Last month Subaru recalled 395,000 vehicles from its domestic market after announcing in October that it had allowed uncertified staff to conduct inspections of some vehicles.

Nine models, including a sports car that Subaru manufactures for Toyota, were recalled but vehicles sold overseas were not affected.

The recall is estimated to have cost 20 billion yen (US$178 million), according to the automaker.

A third-party investigative report submitted by Subaru to the government yesterday said the inspections by uncertified workers might have begun about three decades ago in the 1980s.

The report also said workers concealed the practice from authorities during their visits to factories.

The scandal came to light after the government ordered Japan’s automakers to check their inspections following the recall of some 1.2 million cars by Nissan in October.

Nissan said the vehicles had failed to meet domestic rules on final inspections.

The embarrassing admissions have hurt Japan’s auto industry, once the envy of the world.