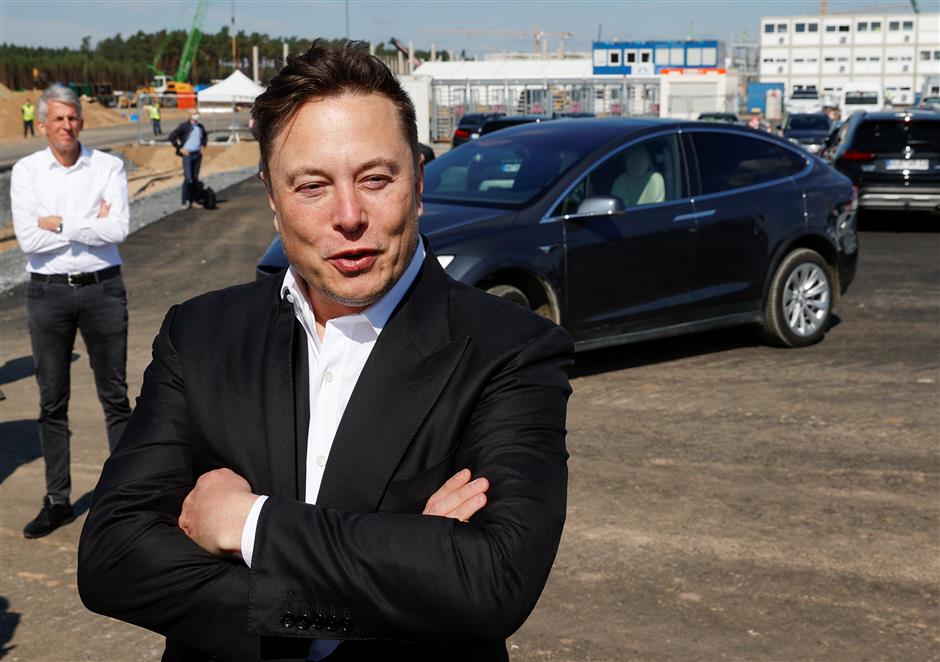 In this file photo Tesla CEO Elon Musk talks to media as he arrives to visit the construction site of the future US electric car giant Tesla in Gruenheide near Berlin on September 3, 2020.

Whether the topic is transforming the automobile or conquering the next frontier of space, Elon Musk has shown a knack for captivating an audience beyond investors and science geeks.

The brash Tesla CEO, now the world's wealthiest person following the electric automaker's meteoric rise, was the quintessential Silicon Valley disruptor — except he no longer lives in California.

The norm-shattering entrepreneur, who has more than 41 million followers on Twitter and a fortune now estimated at more than US$180 billion, announced last month he had relocated to Texas and could not resist one last dig at the West Coast state.

"If a team has been winning for too long, they do tend to get a little complacent, a little entitled, and then they don't win the championship anymore," Musk said at a conference hosted by the Wall Street Journal.

"California has been winning for a long time... and they are taking it for granted."

"How strange," Musk said on Twitter when informed of the distinction. "Well, back to work..."

Musk, 49, was born in South Africa and holds passports from the US and Canada after completing his studies in Ontario and the state of Pennsylvania.

By 25, he had created Zip2, an online advertising platform, and was a millionaire by age 30 after selling the company to Compaq Computer in 1999.

He followed that success with the creation of the online bank, X.com, which was later merged into PayPal which eBay bought in 2002 for US$1.5 billion.

But Musk has entered a new stratosphere over the last few years as Tesla has grown and come closer to achieving a mission he said is not purely economic.

A linchpin of Musk's larger goal of remaking transportation has been the Tesla Model 3, intended as its first vehicle aimed at the middle market rather than luxury.

After setting ambitious goals for the model's ramp-up, Musk hit a rough spot in 2018 as Tesla missed targets while burning through cash.

In an especially infamous moment, Musk in August 2018 jolted markets by announcing on Twitter that he was considering taking Tesla private and boasting he had "secured" financing for doing so.

Musk quickly dropped the go-private effort, but became embroiled in a bitter dispute with the Securities and Exchange Commission, which charged Musk with fraud, slapped him with a US$20 million fine, and demanded he step down as Tesla chairman and agree to follow board-supervised protocols on his social media use.

But Musk — and Tesla — hit his stride in 2020, with the company impressively lifting output in California and Shanghai, breaking ground on new factories, and scoring a series of profitable quarters as its market value soared.

Over this period, Musk has become embroiled in fewer controversies.

But an exception came this spring when the Tesla chief castigated public health authorities in Alameda County over restrictions due to COVID-19.