Caution lights are flashing in the electric-car industry

Electric vehicles have hit a serious road bump on the way to widespread public use.

Dominating the recent news on self-driving vehicles, US authorities opened a formal investigation of Tesla's autopilot system, Chinese rival manufacturer Nio suffered the fatal crash of one of its autonomous cars and General Motors expanded its recall of its Chevrolet Bolt electric cars because of concerns about potential battery fires.

Moreover, Toyota last week announced a halt to its electric, self-driving shuttles ferrying athletes around the Olympic Village after one of its vehicles hit a visually impaired Japanese judo competitor. The athlete was treated and released, but had to withdraw from his match.

"Let's be honest, there's a long way to go before automated or unmanned driving is widely seen on our roadways," said Fu Yuwu, president of the China Society of Automotive Engineers.

In China, a country actively promoting new vehicle technologies, a degree of pessimism descended on the self-driving industry after a NIO vehicle crashed into a highway maintenance vehicle in the southeastern Chinese province of Fujian, killing the driver.

An investigation into the cause of the accident is underway, according to media reports that identified the driver as 31-year-old entrepreneur Lin Wenqin, who was riding in an ES8 sport-utility vehicle.

The vehicle's NOP (Navigate on Pilot) system was turned on, though NIO officials stressed the car was not a fully self-driving. NIO shares plunged after the accident.

According to the China Society of Automotive Engineers, there are six levels of automated driving. Most electric cars sold in China belong to the level where the driver still needs to monitor the driving environment.

Meanwhile, Tesla's autopilot and other self-driving features have come under scrutiny from US safety regulators.

The probe by the National Highway Traffic Safety Administration will cover 765,000 vehicles, including at least 11 accidents involving vehicles on autopilot. The agency has sent investigators to 31 crashes related to driver-assisted technology since 2016.

The Chevrolet Bolt recall – the third in several months – is related to lithium-ion battery fires. No Chinese vehicles are included in the recall.

Electric vehicles, while rising in popularity, remain outliers in the auto industry. 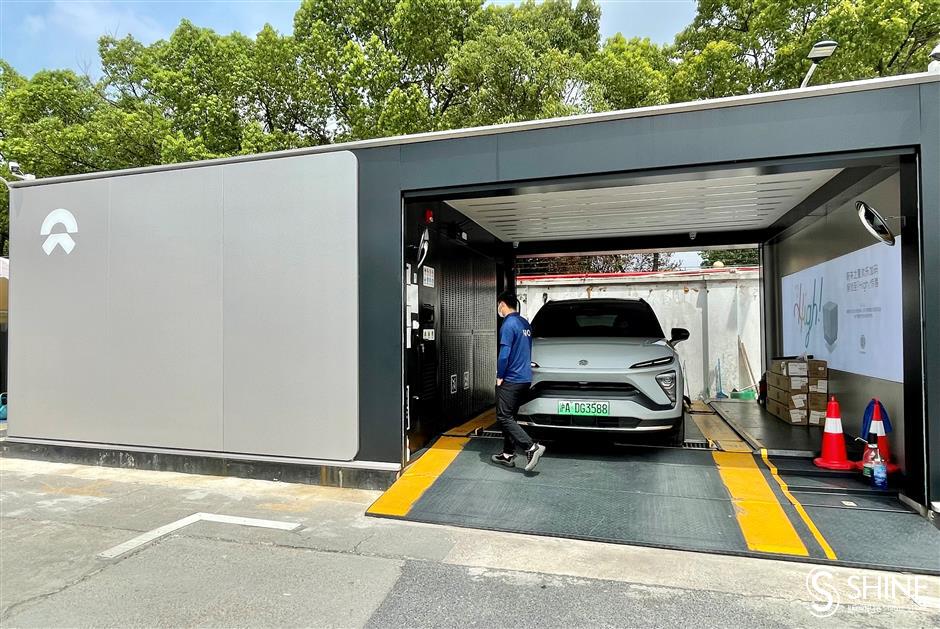 A NIO battery-swap station on Shuiqing Road in Minhang District of Shanghai.

In China, discussions about the vehicles mainly focused on safety, liability in case of accidents, regulatory oversight and consumer trust.

According to China's current road safety regulations, drivers of electric cars equipped with automated driving systems are responsible for accidents, not the manufacturers.

"If the carmakers were to take the blame once, they would be forced to take responsibility for all similar accidents in the future, and that could involve huge compensation bills," said Zhang Xiang, an auto industry analyst at North China University of Technology.

He stressed that judging whether errors are the fault of automated driving systems or drivers is very difficult.

Yu Kai, chief adviser to the general manager at domestic automaker SAIC's Passenger Vehicle Branch, tried to explain the dilemma this way: "These cars are like horses that have the ability to run independently, see and avoid obstacles, and choose the safest routes. But the rider holds the reins in most situations and can change the horse's actions if necessary."

He added, "Drivers of autonomous cars are the horseback riders. If the horse crashes into pedestrians, the horseman rather than the horse should take the responsibility."

A relative of Lin Wenqin, the driver killed in NIO accident, said both he and Lin were led to buy NIO cars because of company claims that automated driving is safer than human driving.

Indeed, NIO and many other electric carmakers produce slick advertising that often suggests their vehicles are "smarter" than they actually are.

In 2016, after a Tesla driver crashed into a car and was killed, Tesla changed the Chinese translation of "autopilot" to "assisted driving" in its sales pitches.

"Carmakers should not excessively advertise auto pilot technology in promotions," said the society of engineers' Fu. "They should focus on assisted driving rather than on automated or even unmanned driving."

Many consumers reacted negatively to the recent spate of bad press about driverless technology.

Zhou Xiao, 36, a teacher at a university in Shanghai, said, "I am a mother of a baby girl, and I wouldn't risk my life or hers to try out this new technology, especially when it's in its initial stages."

Shi Qi, 32, an engineer in Shanghai, said, "I will definitely not buy a car with autonomous driving. I know it's not mature now, and even if it is popular in the future, I will not use it, except if everyone has to use it."

Many chief executives in the electric vehicle industry, sensitive to all the criticism, are coming out to denounce misleading advertising used to sell more driverless cars.

"In the promotion of electric vehicles, companies should avoid exaggerating their technologies," said Li Xiang, chairman and CEO of Li Auto Inc, a Beijing-based electric vehicle manufacturer. "It's beneficial for consumers and all industry players in the long run if they focus on developing technologies and restrain promotions."

Zhou Hongyi, chairman and CEO of Qihoo 360 Technology Co, a major shareholder of electric carmaker Hozon Auto, said artificial intelligence is not as magical as described in some promotions.

"There are many errors the industry needs to correct," he said. "Industry players should not mislead consumers at the cost of their safety."

Zhu Xiaohua, a senior manager at Pan-Asia Technical Automotive Center, a joint venture between General Motors and SAIC Motor, cautioned that "automatic technology is not mature, but promotions may lead consumer to believe it is, causing them to relax their vigilance while driving."

China has expressed the desire to become a world leader in the development and use of smart, green cars.

There are currently an estimated five million electric cars on Chinese roadways. The government has said it wants 25 percent of all cars sold to be electric by 2025.

Since 2009 when China established developing electric vehicle as its strategy to be a world leader in automotive industry, the government has been rolling out plans and incentive policies to promote the electric vehicle industry. But are industry regulation and monitoring sufficient?

"Intelligent connected vehicles are new and urgently need regulation," said Pan Helin, a researcher at Zhongnan University of Economy and Law. "Recently some problems revealed in the commercial application of auto pilot technologies are thought-provoking. If not regulated in time, the safety of autos will be out of control."

Pan suggested strict rules should be adopted to govern the testing and operation of autonomous driving systems.

"At present, the intelligent technology of automobiles is developing rapidly," said Cao Guangping, an auto analyst. "In some areas, technologies run ahead of industry standards and management lags behind."

He added that it is difficult to standardize autonomous driving standards at present because of the variety of auxiliary functions attached to such systems.